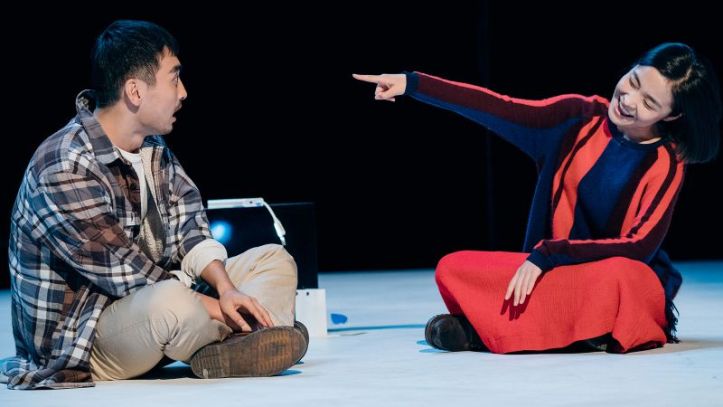 Constellations, my first introduction to the playwright Nick Payne, quickly rocketed up the list of my all time favorite theatrical experiences. It plays havoc with my heart, particularly when it premiered on Broadway at the Manhattan Theatre Club’s Samuel J. Friedman Theatre in early 2015. Starring the talented Jake Gyllenhaal, in his Broadway debut, and the incomparable Ruth Wilson, the play twists and repeats, bending time and function in a way that I wasn’t prepared for. Ruth Wilson, an actress I had heard of but had yet to encounter, created magic with Gyllenhall, making me marvel at her depth and intricate transformance.  She received a Best Performance By a Leading Actress in a Play nomination for the 2015 Tony Award, and the play received three Drama League Award nominations: Best Play, Best Actor, Gyllenhaal, and Best Actress, Wilson. All so well deserved, so it was without hesitation, that when I saw Nick Payne’s Constellations listed on the press release for the Public Theater’s Under the Radar Festival, I quickly and without hesitation, said “yes, please”.

I invited my companion who also said “yes’, and, assuming he did his research, we made a plan. I was excited to see this fascinating play, one that revolves and turns itself around the ideas of engagement and connection, formed out of singular moments that could easily shift with subtle ease from one outcome to another, and change the pathway that love can take. Playing with the idea of fate against action, Payne plays with the ideas of Quantum Theory and parallel dimensions of space and time, all inside the bee hive of a love relationship. Ballroom dancing around the intricacies of our small, almost instantaneous reactions to one another, he explores with determination our internal fearful self and how we can unconsciously control of fate in regards to love and attachment. It’s compelling theatre and exacting writing on Payne’s behalf, and I will see anything he writes like the beautifully crafted Sea Wall/A Life that made it’s way to Broadway, via the Public Theater this past fall with Gyllenhall once again firmly attached.  Little did either one of us realize at the time that this award-winning production of Constellations was flying over from China, skyrocketed forward by director Wan Chong and his Beijing-based company, Théâtre du Rêve Expérimental, landing assuredly at La Mama Experimental Theatre Club fully intact and performed beautifully and intricately in Mandarin Chinese with supertitles in English (January 9-12). That was the surprise of the night for us both.

Talking over a drink before the play, we both wondered out loud if we would have, on a Friday night at the end of a long stressful work week, chosen this play knowing about the subtitles. To be honest, we couldn’t come to a definitive answer. The actual play was a big draw for me, but I was concerned how this would play out. I’ve seen subtitled plays before, and even as it can distance us from the characters by having to look elsewhere to understand, it can work and work well, much like it did with the powerfully hard-hitting German production of History of Violencethat I recently saw at St. Ann’s Warehouse. So there we were, across the street from La Mama, feeling exhausted from the week, but with the knowledge of a 90 minute running time, we shrugged and set off, hopeful and curious, but wary of what was in store and what we might be capable of taking in.

We shouldn’t have been concerned in the slightest. Using thirteen cameras surrounding a circular white platform, courtesy of set designers Ji Linlin and Di Tianyi and lighting designer Meng Lingyang, director Wang structurally formulates the play into a compelling “stage movie” with fifty long cinematic takes of the fifty unique and non-linear scenes. Implanted in the center and in between each video segment, a hamster runs itself ragged on a wheel . I wish they could have used a video of a hamster on a wheel rather than a real one trapped inside a small plastic cage – it was distracting to say the least, as I was worried about the creature enclosed in that way, and how it sat dangerously in the center of the stage just waiting to be kicked – was that a metaphor, or just an obstacle for the actors to avoid? Regardless, the creature was, in a way, dictating the segment cuts and offering up the possibilities of all the different deliberations and outcomes. The interactions are presented and projected poetically and uniquely on a large screen above the action, with the subtitles inscribed at the bottom. It’s easy going within the construct, giving us clarity and a certainty of integration, while never making us feel like we might miss out on the actors as we read the text, as they are on screen in close up engaging with one another in a variate of different positions. The result is an intimacy that draws one in cinematically, but simultaneously makes us feel somewhat removed from the real life drama playing out below the screen.

I wondered what the experience would have been like if we could understand Mandarin. To understand without reading; to watch and listen to Marianne, engagingly portrayed by Wang Xiaohuan, transfix and astonish us with the depth of her knowledge regarding cosmology, quantum mechanics, string theory and the belief that there are multiple universes that pull people’s lives in various unique directions. Standing beside, behind, and around her is Roland, lovingly portrayed by Li Jialong, wanting and resisting, fighting for and against, the inevitable. Would our eye have bounced back and forth from the screen to the real life actors working wonders below if we didn’t need to read while watching? My eyes stayed glued to the screen, reading the play – and understanding it in a somewhat more detailed and clear way – while watching with complete engagement as the two circle around their need and want of one another. Universes collide, as we follow them to the outcome, paying particular attention to the one where Marianne begins to forget words and has trouble typing. We see it coming from early on, as we have been given sign posts that all seem to lead to her personal ending. Do all the roads lead to this? Is Marianne’s fate the only structural and physical ending available to her? And is Roland’s role and involvement predetermined or only when the stars are aligned in one particular complicated Constellation? These are the questions that will haunt and enliven you long after the hamster stops running.

It’s fills to the edges with complicated and intriguing questions, many that we went over as diligently as we did after seeing it on Broadway. The subtitles and the camera work kept me from being as thoroughly destroyed as when I witnessed Wilson on Broadway. She reduced me to a puddle of love and loss, but this alignment of Constellations certainly had us strapped in tight for the whole flight. I anxiously looked over at my companion, trying to know what he was thinking and feeling about the production as his body language was giving me all different conclusions – just like the play. It was hitting him harder than I could ever have imagined though, as he had a personal relationship with the diagnostic drama unfolding over and over again before his eyes. It was digging itself deep inside his own multi-reflections of the craziness of the cosmos and what outcomes the world may bring forward to deal with. But regardless of your personal attachments, the play forces one to look inside our small, almost unconscious reactions to one another and realize the power of one word or turn of a phrase. It could mean the beginning or the end of something or someone, and that nothing is designed by fate, except maybe our physical being. It challenges us to look deeply into the way we come in contact with one another, and how we remain connected. It’s a question to the stars above, and those Constellations instructing us to pay attention to the small details as it seems, by the revolving interactions, that the more honest, authentic, and vulnerable we are to one another, the more likely the engagement will continue and thrive. Now that’s a ride worth taking, no matter what language is spoken.