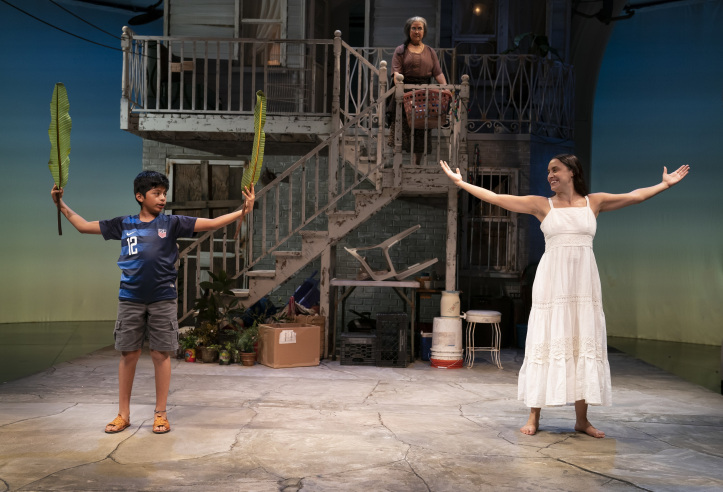 Flying in on palm leaf wings dressed in angelic white, playwright Luís Alfaro (Oedipus El Rey) finds the ceremonial ritual in his leading lady’s desire to make her spiritual way home, even when home is something to run away from and someplace impossible to return to. It’s in the summoning of the traditional Greek Gods of Theater where the wise playwright finds his deeply moving immigrant take on the Greek tragedy, Medea and in his central character’s decent into a spiraling madness. The desperate soul of Mojada resides in the tragedy of the maternal core of Medea, played with earthbound love and naive devotion by Sabina Zúñiga Varela (Culture Clash’s Bordertown Now). The title of this taunt new play refers to a negative slang thrown with hatred at the Mexican immigrants at the heart of this dynamic play, and with the Orange Monster’s horrific racists rants against the four Congresswomen of color still hanging in the twitter atmosphere, the slap stings with a present day force. As directed with a soulful presence by Chay Yew (Rattlestick’s Draw the Circle), the husband’s fantastical dream of riches and security in the United States of America is “plump and full of possibilities“, and even when the clumsiness of a few incidental characters draw us out of the desperation and pain, the trials imposed are deadly and real.

The timeliness of this tale is heated and powerful, packing a punch that stings. The focus at first is on Tita, a blending of the two Euripides’ caregivers; the Nurse and the Tutor. Played with sarcastic charm by the firecracker actress Socorro Santiago (Broadway’s The Bacchae), this old Mexican woman has been at Medea’s side since she was a young child, and although her roots never feel completely homegrown, she makes care and determination authentic. The heartfelt and touching claim she serves before handing off the narrative focus is that Medea, back in Mexico, was an artist, but here in America, she is literally a sewing machine, bolted down to a Queens apartment doing work for a few measly dollars, too afraid to ask for more or walk beyond the gates. “You can’t let the past be your future“, Medea is told, but the arduous journey from back there to here, with Tita and her son Acan, played by the overly smiling Benjamin Luis McCracken (“Extremely Loud and Incredibly Close”) close at hand, will forever be etched into her body with traumatic punctured trauma.  She tells the tale of their escape with a solo force in painstakingly intense detail . She describes the journey behind her ruggedly handsome husband, Jason, muscularly played by the charismatic Alex Hernandez (RTC’s Kingdom Come) step by step as they merge forward into the American haze. Her husband has a plan, but he falters under the moneyed weight of the American dream. He follows using his sexualized body in a way that is in direct opposition to her own tragedy, seeing a pathway carved out of the very dirt and betrayal that they had hoped to leave behind. It’s a shockingly hard twist of the machete, his casual betrayal, told to Medea earnestly as if she should understand and agree. But the cut is too deep for her to withstand and she prickles back with a deadly vengeance, in solid Greek tradition, demanding that the hurt be heard and felt by all concerned.

It’s rough and fractured, this dangerous hike, but for some reason, it remains somewhat detached in the cold night air of the oppressive desert. The set, by designer Arnulfo Maldonado (LCT’s The Rolling Stone) centers the heart in Queens, but doesn’t find the dirt that symbolically should be caked on the costumes of Haydee Zelideth’s (Pipeline’s Playing Hot) telling design. The lighting by David Weiner (Broadway’s The Price) along with the solid sound design by Mikhail Fiksel (Public’s We’re Only Alive…) and light projection design by Stephan Mazurek (Steppenwolf’s Russian Transport) works the structured machine well, stitching together the pieces into a solid whole while systematically making the journey harrowing. But it feels removed and somewhat awkward in its dramatic staging, never getting a solid hold on my heart. Mojada rips the seams apart slowly in its choppy and sometimes hard to swallow dramatic Greyhound telling, presenting the horror of the ride, but losing the drive somewhere along the way.

The fight and the flavor resides in the side notes of the three shades of minority female arrivals. Luisa, played with punch and fire by the fast talking Vanessa Aspillaga (Public’s As You Like It) lives in the legality of the Puerto Rican Hispanic experience in America. She’s filled to brim with passion and fire, but struggles for stability after the Hurricane ruined her livelihood. She sells churros on the street corner, and has as much to say about the world and its injustices as any full Greek chorus could. It’s a masterclass of invention, both by the playwright and the actress, breathing authentic engagement into the scenario, but the more tense comparison lies with the Cuban immigrant, Pilar, played with power and confidence by Ada Maris (Public’s Bang Bang Blues). Pilar does what men basically do out in that deadly desert in her illegal entry. She takes what she wants, and leaves the carnage out there in the dirt to dry up and blow away. “If you hold on too tight” Medea is told, “you’ll get burned“, but Medea, unfortunately, does just that against the greediness of the ruthless Pilar. In true Greek form after a well placed prick of revenge, the whole familial house comes burning down around them all, leaving few to mourn the loss of those involved.“I prefer my ugly husband” says the wise Luisa, who tries her best to send out the warning flares after hearing through the gossip channels of Jason’s greedy survivalist eyes looking outward for the American prize. The vantage point is as harsh as their journey through the dangerous desert to NYC in search of salvation, making Mojada a well intentioned and focused immigrant story. The family is authentically and forcibly caked in the sweat, violence, and fear of our present day reality. “I can see the land on your skin“, Medea is told, as she chronicles the family of four bravely walking forward into a new unknown, leaving the screams of young girls buried behind. They struggle for breath on this journey towards hope, but find something unexpected waiting for them wrapped up in a mean spirited American dream. Even with the somewhat silly and unnecessary last scene, topped off with a bad grey wig and mustache, Mojada takes a strong stance against this country’s repeatable cruel and heartless attitude towards immigrants in crisis. It finds the complications in the hope and layers a tragedy of Greek proportions all around it. Salvation is left to wither in the cold desert air, next to the dream and an old man who doesn’t have the strength to go any further.