Puffs: Or Seven Increasingly Eventful Years at a Certain School of Magic & Magic

Puffs: Or Seven Increasingly Eventful Years at a Certain School of Magic & Magic 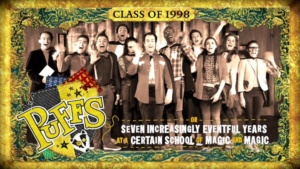 Fair warning: muggles with Dursley-ish qualities should sit this one out. If that sentence made no sense, that means you. If, however, you have fantasized about receiving your Hogwarts acceptance letter, and gallivanting off to a life filled with magic, then Puffs: Or Seven Increasingly Eventful Years at a Certain School of Magic & Magic is going to feel like exactly what you’ve been waiting for. 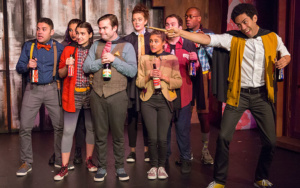 From the moment you step into the theater, you are transported, and while the set itself wasn’t like any part of Hogwarts I had ever imagined (the patches of floral wallpaper seem entirely out of place, even if Herbology is the Hufflepuffs’ best subject, and the hanging burlap doesn’t make any sense at all), its many doors and openings gave ample space for the actors to play, which they utilized more and more as the show went on, culminating finally in the meticulously choreographed final battle. The set dressing of the audience space added extra ambiance, particularly if you were lucky enough to arrive a little early and could admire the portrait frames (and wonder where their subjects had gotten off to!), as well as enjoy the various school announcements regarding Charms Club and other magical extracurriculars coming over the magical loudspeaker (although sometimes these were lost amid the audience chatter). These little touches to a pre-show experience tend to make all the difference, and as long as you didn’t think too hard about why there were muggle Christmas lights and other distinctly non-magical fixtures adorning the set walls, the moments before the narrator’s appearance were spent in giddy anticipation for whatever was to come. 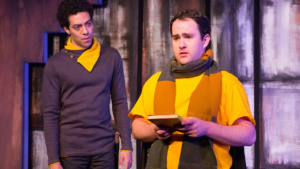 As it turns out, we would spend the next 100 minutes re-living Harry’s seven years at Hogwarts, but from the fresh perspectives of the hitherto unknown Hufflepuffs of his year, mainly the newly imagined characters of Wayne, Oliver and Megan. This new trio is supported by a large cast of others playing multiple roles as Hufflepuffs and old beloveds alike, and throughout the course of the show we watch them struggle with spells, hormones, personal identity, and the question of what it was really like for everyone else while all these terrible, scary things were happening at school, and that pesky Potter kid was hogging all the spotlight. There’s something inherently comedic about that premise, embodied perfectly in the scene where we experience what it was like for on-lookers of the second task of the Triwizard Tournament while Harry and the other champions were underwater: literally everyone was just staring at a lake for an hour with no insight as to what was happening underneath the surface. After that, additional amusement stemming from the new storylines seemed like an added bonus. And while some bits went a little long (Voldemort using the megaphone), or could be cut entirely (Cedric transfiguring the birds), and while a disproportionate number of the girls speak in annoying high-pitched registers, Matt Cox’s script is overflowing with jokes and allusions that will leave you laughing until you cry.

But even the most expertly crafted script will fail if it is not placed in capable hands, and for this, credit must go to Zac Moon. Perfectly cast as Wayne, he delivers huge chunks of dialogue at a breakneck pace with expert comedic timing, and functions as a trusted, steady guide (a patronus, if you will) through this whirlwind of a show. His skill, combined with Kristin McCarthy Parker’s direction, creates an atmosphere that allows the audience to get lost in this world. Other favorite performances included Eleanor Philips’ portrayals of Professors McGonnagal and Sprout, Madeleine Bundy’s portrayal of Harry Potter, and Jessie Cannizzaro’s brief but memorable portrayal of Draco Malfoy.

However, outside of those featured moments, they, along with the rest of the cast, struggled to find their individual voices when playing the actual Hufflepuffs, and this resulted in disappointingly homogenous performances in those ensemble scenes. Between Leanne (played by Andy Miller) continually reminding us that they are in fact all wizards (as if we could have forgotten), Hannah (played by Eleanor Philips) repeatedly being surprised that she is being bullied, and J. Finch (played by Nick Carillo) prancing around the stage, the Hufflepuffs are not so much united by traits of loyalty and strong work ethic as they are by obliviousness and bumbling stupidity. Even the main supporting characters of Megan (played by Julie Ann Earls) and Oliver (played by Langston Belton) who have more lines and stage time to showcase complexity and evolution missed the opportunity to do so. Their character arcs, which begin with her as a girl who is determined not to be a Puff and a boy who can’t make peace with the fact that his propensity for math is not relevant to magic, and end with her as the puffiest Puff and him being happier as a wizard than a mathematician, are predictable and reduce them more to caricatures than redeemers of their house. This effect trickles down to the smaller roles, and while every cast member gets a multitude of laughs throughout the show, I wished for more diversity and dimensionality among them.

Madeleine Bundy also deserves a special mention because not only was her portrayal of Harry inspired, but she was also responsible for the set, costume and prop design. No small feat, but to top it all off, the props were marvelously inventive, particularly the dementors, the spiders, the dragon egg (was it made out of spoons??), and my personal favorite, the set and puppets used during the Founding Story. Bundy’s aesthetic imbued the rest of the show with a whimsical spirit that was contagious.

All in all, it’s hard to imagine a better way to spend an evening at the theater. Puffs reminds you that even in the humdrum and drudgery of the muggle world we live in, our favorite magic school will always be there, and it might behoove us to return more often.