Qurrat Ann Kadwani Brings Rape Out Into The Open in Intrusion

Qurrat Ann Kadwani Brings Rape Out Into The Open in Intrusion

Is it possible to live in a world without rape? That is the question asked by Intrusion, a one-woman, multi-character play from writer and actor Qurrat Ann Kadwani. 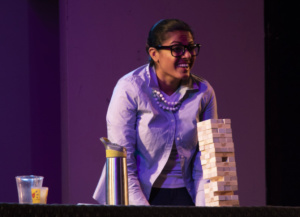 In Intrusion, we get a vision of a world that has been rape-free for 20 years – until one fateful night when a woman enters an emergency room. At that moment, an already fragile tower begins to crumble, and powerful forces could stand in the way of rebuilding the peace.

That twenty-year lapse gives the topic of sexual assault a clarity and urgency that often isn’t easily available today. Despite this being the era of the ever burgeoning #MeToo movement in a country whose current president once bragged about sexual assault, focused discussion of violence against women seems lost in the shuffle of  other shocking news stories told in rapid succession. But in “Intrusion,” there is no time to wait – or to be distracted.

This blank slate is a clever way for Kadwani to convey the complexity of rape and the reaction to it in an organized fashion, while her talent for transforming herself  into a wide range of characters of different genders and ages conveys just how multi-faceted and massively affecting the topic can be.

This is also a play of ideas, plenty of shocking facts and logic thrown in, but thanks to Kadwani’s talent, there is a momentum that creates a larger story with memorable and surprising characters in hard-hitting moments.

After opening as an activist and narrator, Kadwani transforms herself into an ambitious broadcast reporter who has to convince her bosses that she can cover the rape in an entertaining way, “like a documentary,” because somehow, the story of the rape itself isn’t good enough for television. This is one of several characters throughout the play, as in real life, whose self interest and ambition keeps rape from being dealt with as clearly as it is in “Intrusion” itself.

However, Kadwani does not stray too far from the initial idealistic premise that rape could be eradicated. In one vignette, a prosecutor who is so worried about taking on a potentially losing case doesn’t forget to tell the audience that 98 percent of rapists see no jail time, and that this fact does matter more than winning cases. We also meet a politician who, as hypocritical as he is, tells the audience how much rape and domestic violence affect the economy, and how that was part of the impetus for eradicating it in the first place.

It is moments like these that make Intrusion a work that deftly combines idealism and hope with pure logic and reality. It makes one think that it actually is possible to change the world, and while the facts might be brutal, they don’t have to be discouraging if presented in the right manner.

The complex male characters are also oddly sympathetic. Kadwani’s day trader bro character, who, in another nod to our potential future, discusses the ethics of rape in virtual reality, is also himself an atypical victim. We also meet a little boy who is learning about gender equality, and once again, Kadwani reminds us of the purpose of “Intrusion,” that honest discussion is needed if we are to get anywhere.

In the end, the most important character is the person who wants to change the world the way Kadwani does. After presenting all the logic, she doesn’t forget to remind us that it is anger and injustice that truly changes the world.

Intrusion is a rallying cry supported by a solid and thorough lesson. Kadwani’s deeply intelligent and powerful piece is for anyone who not only wants to know why things are the way they are, but where to find a hope among the rubble.