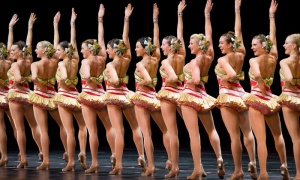 Members of the Radio City Rockettes, who do not want to participate  at President-elect Trump’s inauguration do not have to kick up a storm. AGVA and MSG have both stated this is not mandatory. Madison Square Garden Co., has stated that ALL participation in this particular event will be voluntary,” added the American Guild of Variety Artists in a statement.

MSG stated earlier; “For a Rockette to be considered for an event, they must voluntarily sign up and are never told they have to perform at a particular event, including the inaugural. It is always their choice. In fact, for the coming inauguration, we had more Rockettes request to participate than we have slots available. We eagerly await the inaugural celebrations.” 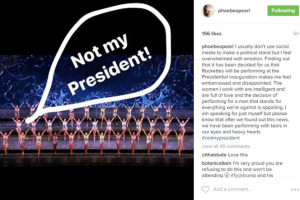 The event made news when one particular Rockette, Phoebe Pearl, took to social media and posted, then deleted a post which you can read here; ” I usually don’t use social media to make a political stand but I feel overwhelmed with emotion. Finding out that it has been decided for us that Rockettes will be performing at the Presidential inauguration makes me feel embarrassed and disappointed. The women I work with are intelligent and are full of love and the decision of performing for a man that stands for everything we’re against is appalling. I am speaking for just myself but please know that after we found out this news, we have been performing with tears in our eyes and heavy hearts. We will not be forced! #notmypresident

After talking to several Rockettes Ms. Pearl would have never been forced to perform as she did not sign up. What is happening is the ones who want to perform are facing backlashes from those who do not wish to participate.

“How many times as artist have we had to act, sing or dance for companies and people we wish were not in the audience. We get to do what we love and yet sometimes we take the job even though it goes against our beliefs. I once was a dancing cigarette and we all know smoking gives us cancer. I have done pharmaceutical industrials, liquor ads and done shows that I was barely clothed for and those all went against my principals, but I was thrilled for the work. I beat out hundreds of others, who also wanted that job. Note the word, job. In participating in an inauguration, we have a chance to show our craft, our city and it doesn’t take away from what we believe.” This came from an anonymous source who fears the repercussions from an industry that seems not to allow for another point of view.

The American Guild of Variety Artists stated that full-time workers must participate in the inauguration and that any boycotts are invalid.

“We have been made aware of what is going on Facebook and other social media, however, this does not change anything unless Radio City has a change of heart. The ranting of the public is just that, ranting. Everyone has a right to an opinion, but this does not change your employment status for those who are full time…This has nothing to do with anyone’s political leanings (including AGVA’s), it has to do with your best performance for your employer, period. I will reiterate that if Hillary Clinton was the President-elect, nothing would be different, and there would probably be those who would not want to be involved because of her. It is a job, and all of you should consider it an honor, no matter who is being sworn in. The election is over and this country will not survive if it remains divided.”

MSG is “honored that the Rockettes have again been asked to perform in the upcoming inauguration festivities” as they did in 2001 and 2005.

In addition to the Radio City Rockettes, the Mormon Tabernacle Choir will also perform. The choir, which is a part of the Church of Jesus Christ of Latter-day Saints and which was founded in 1847, has previously performed at the inauguration of George H. W. Bush, Richard M. Nixon, and Lyndon B. Johnson.

In addition, 16-year-old Jackie Evancho will sing the national anthem. Evancho finished second in the fifth season of American’s Got Talent; she has been active since 2009 and has released six albums, with one of them going platinum.

The Rockettes, the Mormon Tabernacle Choir, and Jackie Evancho have all faced backlash on social media for agreeing to participate in Donald Trump’s inauguration.