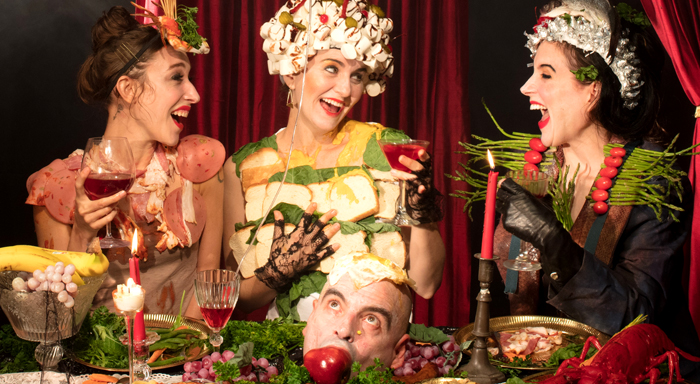 Radiohole’s NOW SERVING: A Guide to Aesthetic Etiquette in Four Courses at the Collapsable Hole, 155 Bank Street, is like visiting Gallagher in hell.

As you enter, you are told you will enjoy complementary cocktails and hors d’oeuvres. The hors d’oeuvres are baby pickles and cheese and crackers. The booze however is plentiful.

Until last night, I had never heard of Radiohole, though they have a following. This ensemble was founded by Erin Douglass, Eric Dyer, Maggie Hoffman and Scott Halvorsen Gillette. In their words “they makes loud, brash and often soggy collaborative shows in the liminal space between theater, performance art, literature, sound and visual art, where conventional rules and categories shift unpredictably”. They are definitely a downtown theatre experimental group.

Now Serving: A Guide to Aesthetic Etiquette in Four Courses, is an irreverent performance dinner party created and performed by Radiohole with Catherine McRae on violin and Kristin Worrall as the pastry chef. I have never been so glad that I was not seated at the table. They turned every course into haute vaginal cuisine, where food flies, is thrown at the guests, is disgustingly served, as wine hangs from IV bags. They self describe the evening as “surreal bacchanalian feast which sets its revenge on the patriarchy”.

As the food is mangled, the gallery watches as a formal “dinner party” for 10 is spoken with fetishistic reverence for Emily Post. This first course is wonder bread cut and drawn to look vaginal, then rolled up into a ball and served cake pop style. When it is done, onto a conveyer belt with the bread, landing at the bottom of the table, in a messy heap. The rest of the courses do the same, during the banquet.

I was seated in the gallery and served snacks (popcorn and junior mints) as well as drinks, which was beer only. At least I was the only one touching my food.

Broschet served in bowls has a frog “Pepe” (Eric Dyer), dropping garnish as his fingers dip into what is served next. When it is done, it lands with a splash that is sure to get you wet no matter where you are seated, as well as turning the floor into a bloody looking mess.

The frog, then turns into a man shown as meat. He is their helper and was their superior. He was awful to them, so now they pay him back for his misogynistic ways.

The three main women woman (Amanda Bender, Erin Douglas and Maggie Hoffman) poison him, as salad is wind blown at the diners. The three main women take a bottle of white dressing and it goes all over their faces. Take a guess at what that is suppose to represent. The diners actually eat this course.

When done, the women take the frog’s head and smear the man with what looks like mash potatoes and cereal. With this ritual performed, diner is served, which is meatloaf. Catherine McRae provides demonic music, as the walls have lighting that appears as flames on the walls. I have seriously now gone to hell.

The phone rings and the dead man gets up to answer it. He reads a piece of paper that is hard to hear, but when I catch snippets of it, vulgar language and incoherent ideas.

Desert is served by Kristin Worrall, as a feminist vaginal monologue is performed. The last piece of desert is supposed to be a clitoris. With that the show thankfully ends.

The show is 60 minutes long, with no intermission. Tickets are $25 for peanut gallery and $50 for table seating.