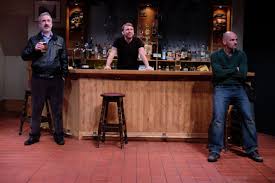 Rage is done Quietly at the Irish Rep

Rage is done Quietly at the Irish Rep 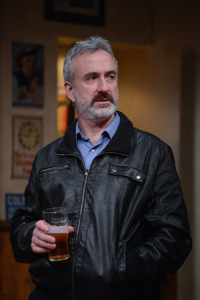 Much happens in a Belfast pub in Owen McCafferty’ Quietly at the Irish Rep in conjunction with The Public Theater. Starting off with pints and TV soccer match, Robert (Robert Zawadzki), the Polish immigrant who tends the bar, serves the anxious Jimmy (Patrick O’Kane). When Ian (Declan Conlon) enters, Jimmy immediately attacks him. Turns out he has good reasoning for it. On July 3, 1974 both were 16 and both their lives were changed forever. Ireland was split as Northern Ireland and Southern Ireland were on opposite sides, Protestants and  Roman Catholics created death, mayhem and destruction. There were victims and perpetrators depending on where you were born decided which you were and where you worshiped. In this bar rage, wounds, civil war, damage and terrorism live in a silent moments waiting to be heard. 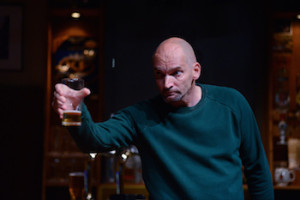 Now 52 and both from the same town, Ian has requested this dialogue to unearth the past. However as Ian states “I can’t speak for the actions of a 16-year-old child,” as if that resolves his actions. I am sorry, no matter how much you have changed from when you were as a child doing somebody elses bidding absolves you from your actions. Spoiler alert: In bombing six men and destroying how many other peoples lives with and an “I’m sorry” takes back that kind of damage, especially after 36 years. Do we absolve the children of ISIS or any other terror group after the reign of terror they have leased upon humanity? I’m sorry, NO!

The play is wonderfully acted and it is no wonder, Quietly comes from the prestigious Abby Theatre in Dublin. Directed by Jimmy Fay, you can feel every sin that lingers ready to leash out to this generation.