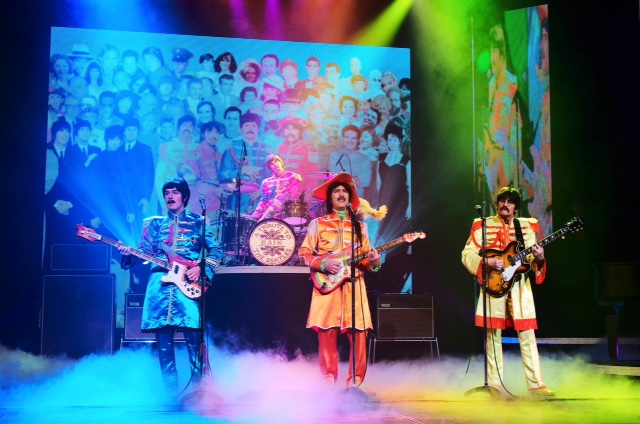 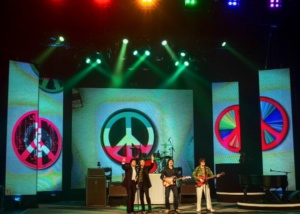 Getting by with a little help from their friends, or in this case a near capacity audience, Rain A Tribute to the Beatles has returned to Chicago to play a brief but memorable concert style tribute to The Fab Four. Originally conceived as a show that featured a Southern California cover band playing the Beatle’s songbook in a tribute show titled “Reign,” founder Mark Lewis has reworked his vision into a much larger scale, Broadway caliber show. Just in case you do not know exactly who they are, The Beatles were four lads from London,  John, Paul, George and Ringo, who revolutionized the look and sound of music, from pop to rock and roll. This cultural phenomenon has been brought back to life in period accurate costuming and is landing for one week at the Oriental Theatre. Featuring Steve Landes as John, Paul Curatolo as Paul, Alastar McNeil as George, Aaron Chiazza as Ringo with Mark Beyer playing additional keyboards and percussion, Rain follows the steady climb and eventual global domination of arguably the world’s first boyband. From the opening moments of the show, the audience is transported back to the magical 1960’s through projected vintage film clips and supporting sound bites. “We were a band who made it very, very big” they quipped. It is also significant to mention, all of the music heard during the show is performed live, not sung to prerecorded tracks. 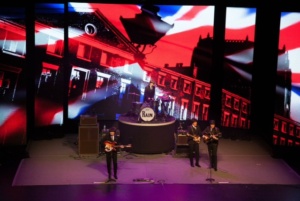 The show itself was divided into multiple chronological  vignettes, the initial opening graced with the iconic voice of Ed Sullivan introducing The Beatles! The audience was treated to a reenactment of the national American debut of the mop-top, Fab Four, dressed in sharp black suits with skinny ties, performing classics  “She Loves You,” “I Want to Hold Your Hand,” “Hard Days Night, ” and  “I’m Happy Just To Dance With You.” The opening set concluded with “Paul’s” stunning, solo acoustic guitar rendition of “Yesterday.” Throughout the show, multiple video screens double as the background set, alternating vintage images of screaming fans, the British Union Jack flag,  floating animated yellow submarines, and photos of the attending audience members singing and dancing along. Do note, this show is performed in a traditional concert format, so the audience is repeatedly encouraged to stand, clap, sing and dance as well.  It was quite heart-warming to watch the Baby-Boomers in attendance, mentally morph back into their youthful screaming teenager selves, pining for their beloved teen idols.  Scream they did, loudly and often. 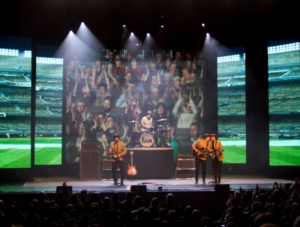 The second vignette had the band reliving their August 15, 1965 debut concert at Chicago’s Shea Stadium. Garbed in matching beige Edwardian collarless jackets and skinny black trousers, the kingpins of the mod youth style of the 1960’s performed  “Help,” “Day Tripper” and  “Twist and Shout.”  The supporting background videos showcased the massive amount of adoring Beatles fans who turned out for that historic Windy City concert event, the likes of which had not been witnessed before.  At the conclusion of this set, during a costume break, the audience was treated to projected vintage commercials of the time, including a Winston’s cigarette advertisement featuring an animated  Fred Flintstone and Barney  Rubble smoking cigarettes! and a pre-Real Housewives senior citizen caught flipping tables and trashing a restaurant just because her soggy pickle wasn’t a crisp  “Vlasic.” Shockingly dated examples of commercials from that era, now played straight for laughs. 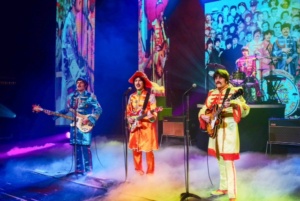 The next segment, a well-timed celebration corresponding with the 50th anniversary of the release of the definitive 1967 Sgt. Pepper’s Lonely Hearts Club Band album which was played in its entirety. Defining the psychedelic movement of the time, the cast paraded around in proud peacock style, appearing much like a hybrid of Peter Pan’s Captain Hook and a high school drum majorette. Multimedia background images alternated between floral patterns, paisley scarves, velvet jacks and bold, acid colors. Lava lamps too, of course. The band serenaded their enthused spectators with classic hits “Lucy In The Sky With Diamonds,” “ When I’m Sixty Four,” “A Day In The Life” and the title track “Sgt. Pepper’s Lonely Hearts Club Band.”

The final piece of the show began with sobering images from the Vietnam War and the Moon Landing, mop top styles now replaced by the antiestablishment “flower child” hippies. In voiceovers, we were informed the individual members of the band were starting to “pull apart at the seams” creatively, however each decided to come together one last time to record,  Abbey Road, christened “one more incredible record.” This final set underway with the band members shouting “Chicago, on your feet” and then exploding with the rock and roll anthem “Revolution.” Waving peace symbols in the air, we were told “the war is over and…  “Give Peace a Chance. ”  Taking  us to church, both metaphorically and physically, the audience swayed back and forth during a pointedly stunning rendition of the reassuring ballad “Let it Be.”

Rain A Tribute to the Beatles is a love letter both to the renowned and trendsetting  rock and roll band as well as to their legion of fans. The Fab Four’s influence on popular culture and fashion is undeniable and arguably still resonates today. Their music clearly the soundtrack of the Baby Boomer generation, The Beatles legendary influence transcends generations.  The final line of the show “Remember, long live the Beatles.” With magnificent, technologically contemporary  productions like this, forgetting the Beatles and their impact will not happen anytime soon.  So, “get by with a little help from your friends” and go see this show before it leaves the Windy City. Celebrating the music of The Beatles, you’ll relish Rain A Tribute to the Beatles ….” yeah, yeah, yeah!”

Rain A Tribute to the Beatles is now playing at the Oriental Theatre through Sunday, April 2, 2017