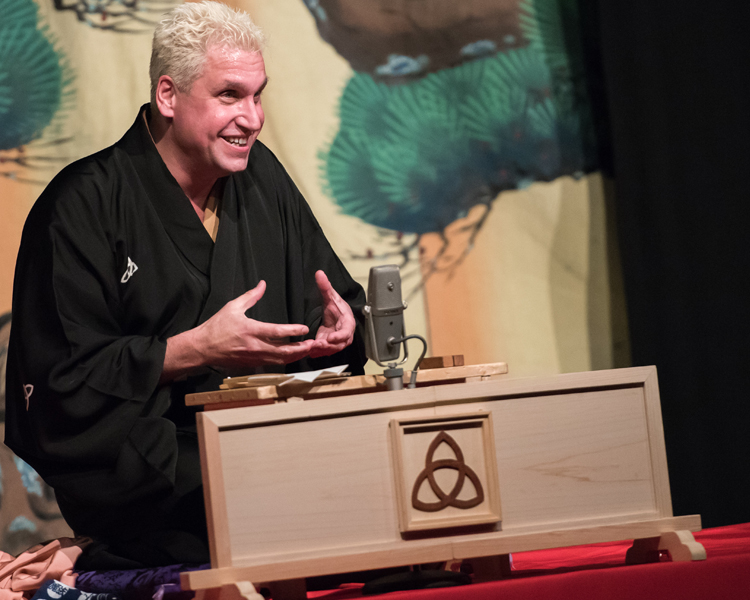 Katsura Sunshine’s Rakugo is a funny, exciting performance of traditional Japense stories. Sunshine is a bright and emphatic performer who ensures that his audience has a good time. He is a delightful storyteller and his stories are for people of all ages.

As he begins his show to a nearly sold out house, Sunshine explains how he came to perform Rakugo, a traditional Japanese art form of comic storytelling. The stories are told using only a fan and hand towel for props, and characters are differentiated by turning the head left or right and by changing vocal intonation. The performer kneels for the length of the performance and wears a traditional kimono. Often the comedy of the stories is based on niceties and nuances in Japanese culture. As a result, Sunshine spends as much time explaining aspects of Japanese culture and language as he does performing the stories.

Most of the cultural information he shares serves us well in that if we didn’t understand certain aspects of Japanese culture, some of the jokes wouldn’t be as funny. He explains to us the many different ways to show gratitude and how to accept or give a compliment. He talks very fast, which makes silent or pantomimed moments more entertaining than you’d expect.

With a beautiful backdrop and simple lighting, it is clear that the emphasis of this art form is the story and the storyteller. Katsura Sunshine has several different sets of stories that he will perform, with a special one-night-only ghost story on November 24th. If you’re looking for a good way to laugh and forget your troubles, and also learn a few things about Japanese culture, this is the show for you.