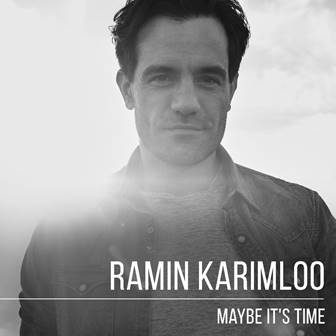 Tony® Award-nominated Iranian-born Canadian singer and performer Ramin Karimloo today releases a new cover of “Maybe It’s Time” from A Star Is Born– available now from Sony Masterworks Broadway.  Written by four-time Grammy Award-winner Jason Isbell for the character of Jackson Maine, “Maybe It’s Time” is instantly recognizable to fans of the film as one of Bradley Cooper’s standout performances.  The wistfully vulnerable ballad is the latest track from Ramin, who continues to showcase the expansive range of his voice with powerfully emotive performances – listen here.

“Within its sullen tone there is this feeling of hope and encouragement for change,” says Ramin about the track.  “This song caught me at a time when I was constantly traveling, spending nowhere near enough time with my family, and that message of hope really resonated with me.”

“Maybe It’s Time” is the latest in a string of new releases from Ramin, following covers of Rent’s “What You Own” and The Greatest Showman’s “From Now On.”  It’s just the start of what is shaping up to be a big year for Ramin, who most recently wrapped his headlining U.K. From Now On Tour in addition to joining the cast of the hugely popular BBC One medical drama series Holby City.

Iranian-born Canadian singer and performer Ramin Karimloo is one of the most formidable talents in musical theater and beyond.  His lengthy list of credits comprise critically-acclaimed leading roles, most notably as Jean Valjean in Les Miserables on Broadway (for which he was nominated for a Tony Award in 2014) and London’s West End, as well as the Phantom in Phantom of the Opera in London. Perhaps best known for his immortalization of the Phantom role, Ramin performed in the 25th Anniversary Concert of Phantom of The Opera at The Royal Albert Hall, which became one of the most widely viewed shows in PBS history, in addition to originating the leading role in Love Never Dies, the sequel to Phantom of the Opera, earning him an Olivier Award nomination.  In addition to his stage credits, Ramin has toured the world performing both solo concerts and with his band, Ramin Karimloo & The Broadgrass Band.  Ramin made his major label album debut in 2012 with the release of Human Heart on Sony Music, which has since been followed by the release of The Road to Find Out: East (2014) and The Road to Find Out: South (2016).