Raúl Esparza Turns Up The Heat in Theresa Rebeck Seared 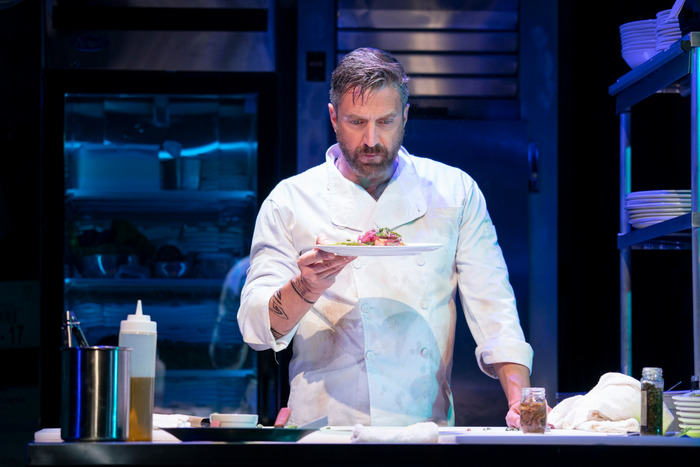 Raúl Esparza Turns Up The Heat in Theresa Rebeck Seared

“Every reasonably talented guy out there has been told that he’s a f*cking genius at some point in his life.” Emily from Seared

Theresa Rebeck’s new comedy Seared, shows us that nobody is irreplaceable, no matter how talented you are, and it does so with an emotionally palate to please. Part of the genius of Seared is its star Raúl Esparza as Harry, who is a passionate first rate hotheaded culinary master with a fear of failing deeply rooted at his core. He is a man who thrives on perfection and can’t not accept second best in anything, including himself. He is obnoxious and seems out of touch with the world. As soon as the food writer for New York Magazine has praises his scallops, Harry refuses to ever make it again to the frustration of the waiter Rodney (W. Tré Davis) and his partner Mike (David Mason).

“Money is legal tender. It’s nothing. It’s a symbol for value, and it’s paper and you can’t eat it.”

Mike has sunk every penny he has into keeping this restaurant afloat and is completely frustrated at Harry’s lack of understanding for his finical dilemma. Without informing Harry Mike has hired a consultant named Emily (Krysta Rodriguez). Harry is not at all please to give up control to anyone, but Emily seduces him into behaving reasonably with expensive Japanese knives. In Emily Harry has met his match.

As Harry extolls about the evil of capitalism and extolls the virtue of artistry, Mike and Emily, talk about the practicality. In the meantime Rodney observes and admires Harry. Ultimately it is Rodney who becomes the voice of reason. Where Harry fails Rodney supersedes and becomes the heir apparent. The question Seared leaves you with, is with enough praise will Rodney continue the cycle or step up?

Director Moritz von Stuelpnagel has us watch Esparza, cook as the restaurant is packed to capacity and then in a silent aria, we see him enrapt in his process. Stuelpnagel allows the play to unfold in layers, slowly pealing the superficial away and at the same time infusing it with broad comedy. He allows the silent moments to take center as he brings out the best in all four of his actors.

Davis is a find and holds his own against these well seasoned actors who mop up the stage with their hilarity. In Mason, we see a man so completely frustrated, whose tolerance is tested again and again. This is a man who would love to have Harry’s talents and loses his admiration. He is basically the straight man to all the over the top drama happening around him. Rodriguez is flirtatious, self-serving, manipulative, yet oh so feminine. She has a wonderful physical presence, that she combines with her a twist of words to make them mean even more. The star here is Esparza, who is bully, savior and failure all in the same breath. He moves like a panther and acts like he is going to claw you to death, yet in his eyes you see that the paw has a thorn and all you have to do is pluck it out. His high energy performance is award winning.

Tim Mackabee’s set is perfect as the backend of a restaurant that is small yet functional. might fit. David J. Weiner’s lighting helps tell us the time of day, but also the emotion that is about to explode. Tilly Grimes costumes, allow us to see the financial dynamics, while staying true to where we are. I loved Palmer Hefferan sound design of dizzying jazzy music to keep us in heightened awareness.

Theresa Rebeck’s writing is delicious, savory and hits all the points. She gets her points in and gives her audience an entertaining night.

Seared is a sensual delight as the audience not only watches the dishes being prepared, but hears them sizzling, smelling the culinary and theatrical delights. You will be craving scallops by the end of this night out.

Suzanna BowlingJanuary 20, 2021
Read More
Scroll for more
Tap
Opening Night of Panama Hattie
Phillipa Soo Rocks The Town Hall at Broadway Stands Up for Freedom at MY BODY MY BUSINESS!