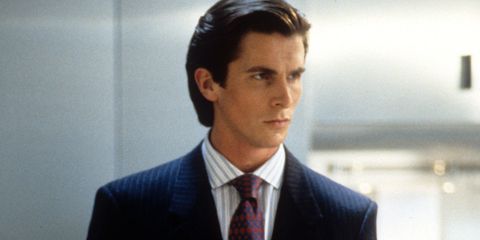 “American Psycho” was released to the public April of 2000; after solid public approval of the book  with the same title, this movie to this day has a cult following. Patrick Bateman (Christian Bale) is an investment banker who works for his father (we never meet the father); he wants to fit in to the societal lifestyle that comes with being a person who went to boarding school, Harvard University and its business school afterwards. Bateman and his friends enjoy the lifestyle of success… fine restaurants, pretty and wealthy girlfriends as well as fine cloths.

Although Bale was originally removed for Leonardo DiCaprio, Bale eventually was brought back into the role after DiCaprio accepted a different movie. The reversal of fortune was a good thing for two reasons: Bale really wanted this role and he was superb in his role as the preppy, witty and highly complicated Bateman.  For the people who read the book, you maybe disappointed in the movie. Where the book was more mysterious, suspenseful and provocative, the movie tries for more comedy as well as tremendous gore. It is a movie, however, with very good acting, deft directing and even better costume designs. Bringing the audience back to the go-go 80’s, the movie was more nostalgic than anything else; the old restaurants that were in business in Manhattan at that time, the night clubs and the fashion.  “American Psycho” begs the question : was it all in Patrick Bateman’s head or not? Does Bateman fantasize about killing people he hates, is jealous of: is he a real killer with an penchant for violence?  The movie never really makes this clear like the book did; nor did the movie spell out some of the problems that Bateman had with his friends, colleagues and his romantic fantasies. The movie was able to make up for this with its great cinematography, however, what lacked in plot line at times was equalized by what we saw in the plots absence.  “Psycho” has a young but talented cast; Jared Leto, Josh Lucas, Justin Theroux and Reese Witherspoon add greatly too this complicated movie. Well cast, these yuppies try to navigate through Manhattan’s social scene; they banter about in different course and discourse. With tremendous wealth, many of the characters have tremendous emotional issues; drugs and alcohol play a great role in allaying what is never explained to us as to why these young people are so miserable.

John Cale’s musical composition captures the different music of the 80’s brilliantly, the most popular songs of the time and the very recognizable ones also, giving an upbeat charm to what is otherwise a gruesome movie. Some of the jokes fall flat or are not recognizable for the audience members who did not live in that era. For the lucky few who were around Wall Street in the 80’s, who had the same suits, ate at the same restaurants and frequented the night clubs of the go-go 80’s, “American Psycho” will bring back fond memories sans the violence.

Considered by many to be one of the great thrillers that ever was, “Basic Instinct” has it all as far as thrillers go… sex, great acting, great car chases and murder. Michael Douglas (Nick Curran-Shooter) is a washed up detective with a penchant for violence; he tracks down bad guys with reckless abandon. With a past of drug and alcohol abuse, Curran is always looking over his shoulder, the good guys and bad guys hate him: he has few friends on the force. Questioned for a murder, Catherine Tramel (Sharon Stone) first meets Nick Curran; it seems that she knows everything about him which unnerves Nick and the detective squad. Tramel is as sexy as she is smart, as a writer and a psychologist she plays peek-a-boo with the not as smart police force. As a successful book writer, Tramel has resources at her finger tips for just about anything that she wants; an in town spread in San Francisco, a palatial beach house outside the city, a Lotus Esprit and a girlfriend named “Roxy”. The fact that Catherine came from money adds to her allure; the woman who has it all is also a cold blooded killer.  What makes “Basic Instinct” so appealing as a thriller is the triangle that develops between Stone, Douglas and Jeanne Tripplehorn (Dr. Beth Garner). The two ladies are both psychologists, both have a love interest in Curran and under great direction by Paul Verhoeven, the water starts to slowly boil until it rapidly does so. As an audience we continually vacillate as to who the good person is and who is not; we guess throughout the movie as to whom is doing the killing and it’s great fun. Each time there is a new murder we are given different choices, different scenarios and it keeps us spinning. Reminiscent of “Dressed To Kill”, “Basic Instinct” will have you on the edge of your seat. “Basic Instinct” is relentless in its action, never once does the movie let you sit there and relax, different character developments keeps one off balance throughout the two hours and eight minutes.

The problem with “Blackcoat’s Daughter” is that it is a non-linear story that goes for cheap suspense rather than any kind of in-depth writing. While Emma Roberts, Kiernan Shipka and Lucy Boyton are all good in their roles, the directing by Osgood Perkins leaves the trio with a vagueness throughout the entire movie. Not only is there a vagueness but the entire movie is very monotone and aloof to be anything but insincere. Further compounding the problem of this mundane movie is that the plot line delves into a plethora of non meaningful subplots. It is revealed that Lucy may be pregnant is so sophomoric that it catches the remnants of an after school special. We are given Roberts mysterious character but little else. Lack of follow through is continual in Perkins writing.   The movie is set in a cold, snowy atmosphere which Perkins tries to establish mystery to the movie, The Catholic Boarding School and the too many empty classrooms add to the dreariness and the empty suspense. Much like a similar movie a year earlier, “The Eyes of My Mother”, it thrives on alienation. Both movies are superficial and lack characterizations and ambition. “Blackcoat’s” has a sensational lack of channeling the story through emotion and relies more on aesthetics than storyline. In “Blackcoat’s Daughter”, it has three timelines that run parallel to each other which makes the story in of itself very confusing in the beginning; as the movie progresses, we see that things fall somewhat into place: yet never taking us anywhere important or meaningful.

G. H. HARDINGAugust 3, 2022
Read More
Scroll for more
Tap
The Glorious Corner
Elahe Esmaili’s ‘The Doll’ Focuses on a Family Who Voice Their Opinions on Their 14 Year Old’s Marriage