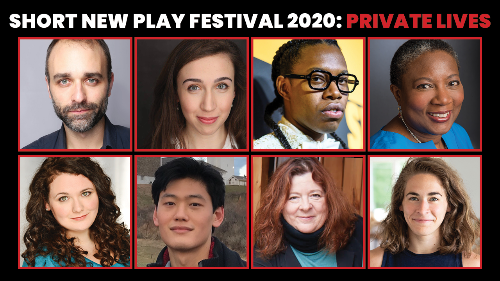 The 2020 Short New Play Festival will be presented online on Monday, July 20th (7:30pm) by livestream through RedBullTheater.com, Facebook, and Youtube. This FREE benefit event is the latest installment of Red Bull’s renowned annual new play festival, an initiative that has inspired the composition of more than 2,500 new plays.

The 10th Annual Short New Play Festival is made possible by the leadership support of The Noël Coward Foundation.

This year’s premieres will include:
Commissioned:

Fear And Misery Of The Master Race (of the Brecht) by Jeremy O. Harris

The Panel by Theresa Rebeck. At a theater panel on “Private Lives” things go very quickly off the rails.

Old Beggar Women by Avery Deutsch. Amanda and Sibyl from “Private Lives” reunite years later on another pair of balconies and bond over an unlikely talent they both share.

In the Attic by Jessica Moss Edmond has been keeping a terrible secret from his wife. In the attic.

Plague Year by Matthew Park. It’s Medieval England and the bubonic plague rages as young Mabel quarantines inside her London home with her newborn daughter and her boorish husband Thomas.

Evermore Unrest by Mallory Jane Weiss. On her honeymoon and confined to her hotel room, Penny writes to her ex-boyfriend, William, with questions about love, choice, health, and safety during times of unrest.

For more information about the Short New Play Festival, or any of Red Bull Theater’s programs, visit www.redbulltheater.com.

RossMay 9, 2022
Read More
Scroll for more
Tap
One of T2C’s Recommendations For Best Musical Broadbend, Arkansas To Live Stream
What To Watch July 15th To Take Away The Blues