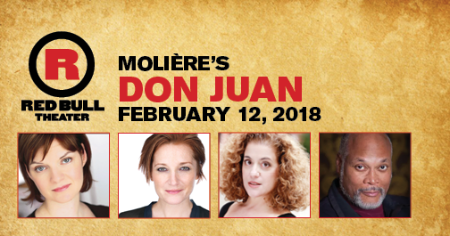 In the hands of the great Molière, Don Juan is as much anarchic philosopher as irresistible lover, discoursing with his servant Sganarelle on heaven and hell, sex and politics, as he jumps from bed to bed, breaking every rule in the book. After its shocking opening night in 1665 Paris, the courtly censors had their way with the script, and it wasn’t seen as the playwright intended for generations. Stephen Wadsworth’s “extravagantly reimagined” (Washington Post) version “produces sheer astonishment” (New York Times), restoring the work to its original subversive brilliance, as Don Juan defiantly risks his soul to think and live as he pleases.

Having abducted Dona Elvira from a convent, Don Juan deserts her to continue his life of amorous intrigues. While en route to his next sexual conquest, his boat capsizes and he is rescued by a peasant, whose fiancée he is about to seduce when he is attacked by a group of armed men. He and his servant Sganarelle hide in disguise in a forest, where Don Juan rescues a nobleman from robbers. The nobleman turns out to be Elvira’s brother Don Carlos, who temporarily abandons his plan for revenge against Don Juan for dishonoring his sister. Next, Don Juan happens upon the tomb of the Commander, whom he killed, and invites the old man’s statue to dine with him. Don Juan returns to his lodgings and informs his father that he has repented for his life of misdeeds, when in fact he has decided to adopt the pretense of religion so he can pursue his licentious life with even greater ease. The statue arrives at the appointed hour and leads Don Juan to hell, as Sganarelle despairs that now he will never recover his lost wages.

Jean-Baptiste Poquelin (1622-73) was born into a relatively prosperous mercantile family; his father served as upholsterer to King Louis XIV. Jean-Baptiste was expected to study law and eventually inherit his father’s position. Instead, he founded the Illustre Théâtre in 1643 and took the stage name Molière to avoid bringing scandal on his family. After more than a dozen impoverished years touring the provinces as actor and occasional writer, Molière and his company returned to Paris and were soon called to perform for the king. Louis loved them and immediately set the troupe up in the Petit-Bourbon under the patronage of his brother, called Monsieur. From this point on, Molière’s career was closely tied to the court, and, strongly influenced by sharing the Petit-Bourbon theater with the Italian troupe of the great Scaramouche (Tiberio Fiorillo), he honed his genius as a comic actor and writer, creating a series of brilliant plays that satirized elegant society, including School for Wives, Tartuffe, Don Juan, The Misanthrope, and The Miser. As Tartuffe had a year earlier, Don Juan (1665) suffered at the hands of the critics and clergy, who considered the play an offense to religion in its celebration of a libertine. They hounded Molière, and despite the king’s unwavering patronage, the experience affected Molière profoundly, and he next created and played Alceste the misanthrope, railing at hypocrisy no less than had Don Juan, though in verse and in a more palatable comic style.  Rousseau insisted the play was serious and Alceste a hero, not a fool.  Molière died in 1673, shortly after performing the title role in the fourth performance of his new play, The Imaginary Invalid.

Red Bull Theater continues its OBIE Award-winning Revelation Reading Series, providing the unique opportunity to hear rarely produced classic plays performed by the finest actors in New York. This year’s readings highlight the season’s themes of love and all its joyous madness—with both Jacobean and French twists—alongside the perils of ambition and the threat of the con. From Molière’s Don Juan featuring Mary Testa to David Garrick’s The Clandestine Marriage with Mark Linn-Baker, this year’s slate of readings is sure to delight you all season long.

Subsequent Revelation Readings, all of which take place on Monday evenings (7:30PM) at the Lucille Lortel Theatre, will include:

March 19th – The Alchemist by Ben Jonson, directed by Jesse Berger, featuring Christian Conn, Whitney Maris Brown, Ryan Garbayo, Jason Kravits, Steven Rattazzi, Robert Sella, Jeanine Serralles, David Ryan Smith, Derek Smith, and John Douglas Thompson.  When the plague hits, Lovewit flees town and foolishly entrusts his Blackfriars house to his servant Jeremy, who promptly sets up shop with fellow con man Subtle and the brilliantly sexy prostitute Doll Common. Claiming alchemical powers, the three scam a series of memorable chumps including Sir Epicure Mammon, a Falstaffian figure with an epic sensual appetite. No one escapes Jonson’s searing wit in this satire of greed and folly, set in his own Jacobean London, in the very neighborhood where he once lived. One of the comic masterworks of the age, and arguably Jonson’s finest, this play promises pure delight.  Please note: this reading is Sold Out.

April 16 – The Second Maiden’s Tragedy by Thomas Middleton, directed by Craig Baldwin, featuring Susan Heyward, Dion Johnstone, Bhavesh Patel, and Miriam Silverman.  A juicy romantic thriller, in the rip-roaring tradition of The Revenger’s Tragedy, this gem was resurrected from a single handwritten Jacobean manuscript, without title or author. The play tells the tragic tale of two sisters—known simply as Lady and Wife—each unwittingly caught in a love triangle and facing a test of her fidelity. But will both sisters pass? Inspired both by Talmudic legend and the story of a Christian martyr, the play features one of the most gruesome love suicides of the age, and a scene of necrophilia to boot. Almost never performed, this hearing is a rare opportunity.

May 14 – A Doctor in Spite of Himself by Molière, adapted by Christopher Bayes and Steven Epp, directed by Christopher Bayes with live music by Pornchanok Kanchanabanca, and starring Liam Craig, Austin Durant, Steven Epp, Renata Friedman, Gabriel Levey, Don Darryl Rivera, Justine Williams, and Liz Wisan. What’s a girl to do, to avoid her unwanted wedding? Pretend she’s been struck mute, of course. And with the help of a dissolute, drunken woodcutter posing as her doctor, trick her rich old fool of a father. Masters of commedia Christopher Bayes and Steven Epp have teamed up to give uproarious new life to Molière’s classic comedy, with “their brilliant, new-vaudeville style,” making it “both raunchier and more unhinged,” (New York Times). It’s Punch and Judy come to life, in this pitch-perfect presentation, punctuated with live music.

June 18th – The Clandestine Marriage by David Garrick and George Colman the Elder, directed by Marc Vietor, starring Mark Linn-Baker, Talene Monahon, Reg Rogers and Ryan Spahn. Wealthy merchant Mr. Sterling tries to better his social standing by marrying his eldest daughter Betsy to Sir John Melvil. Just one problem: Melvil is in love with the younger daughter Fanny, who happens to be secretly married to the humble clerk, Lovewell. And it’s up to Lovewell to convince Melvil to look elsewhere. Set in the finely landscaped garden of Sterling’s country home, it’s effervescent comedy of manners at its finest—co-authored by David Garrick, famed actor-manager-playwright of London’s great Drury Lane Theatre, where the play first delighted audiences.

Red Bull Theater, hailed as “the city’s gutsiest classical theater” by Time Out New York, is the not-for-profit Off-Broadway theater dedicated to shining a light on the classics, bringing rarely seen plays to dynamic new life for contemporary audiences. With the Jacobean plays of Shakespeare and his contemporaries as our cornerstone, Red Bull Theater is New York City’s home for dynamic performances of great classic stories from a variety of eras and countries. The company also inspires and produces new writing for the theater that is in direct dialogue with classical material and styles.

Acclaimed as “a dynamic producer of classic plays” by The New York Times, Red Bull Theater has previously staged productions of Pericles, The Revenger’s Tragedy, Edward the Second, Women Beware Women, The Duchess of Malfi, The Witch of Edmonton, The Maids, The Dance of Death, Loot, The Mystery of Irma Vep, Volpone,  ‘Tis Pity She’s A Whore, The Changeling, The School For Scandal, Coriolanus, and last season’s runaway comedy hit, Gogol’s The Government Inspector for an extended run at the Duke on 42nd Street and New World Stages. The company’s work has been hailed as “the most exciting classical theater in New York” (Time Out New York), “Dynamite!” (The New York Times), “Triumphant” (Associated Press), and “Proof that classical theater can still be surprising after hundreds of years” (Variety).

Red Bull Theater’s work has been recognized with multiple Drama Desk, Drama League, Lucille Lortel, Callaway and OBIE Award nominations and awards, including the Off-Broadway Alliance Award for Best Revival in the 2015-’16 season (School for Scandal). The company has staged over 150 Revelation Readings, named by the Village Voice “Best Play Reading Series,” also developing new plays of heightened language and classical adaptations through workshops and offering educational programs for students of all ages, including Shakespeare In School residencies. Post-play Bull Session discussions with scholars following select Sunday matinees and Readings are free and open to the public.

Red Bull Theater offers Master Classes throughout the year. Taught by top working professionals including Kathleen Chalfant, Sam Gold, John Douglas Thompson, Olympia Dukakis, Heidi Griffiths, Charlayne Woodard and Patrick Page, Red Bull Theater’s intensives and workshops cover a variety of disciplines, including auditioning, text, voice, movement, clowning, stage combat, and acting Shakespeare.  Classes are open to adults at all levels of training or experience. They range from one to four days with limited class sizes to allow one-on-one attention. You can enroll in any combination of classes, or take the whole series for a year-long training experience.

For more information about Revelation Readings, or any of Red Bull Theater’s programs, visit www.redbulltheater.com.