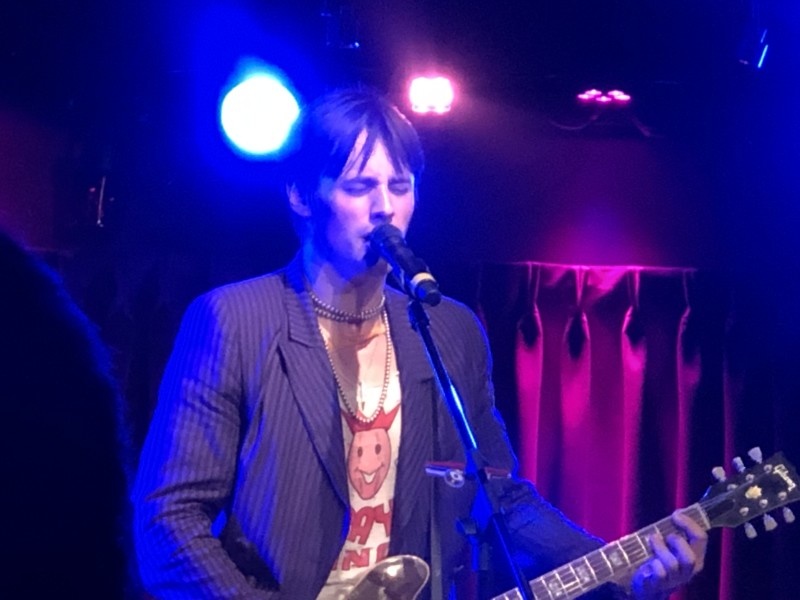 Reeve Carney is starring in Hadestown right now, but if you are lucky enough to catch one of his concerts at The Green Room 42, you will discover Reeve is a full fledged undiscovered Rock God. Reeve’s vocals, challenge Robert Plant, defy the guitar skills of Jimi Hendricks and his song stylings bring back The Beatles writing skills.

Carney, is best known for his portrayal of Dorian Gray in Showtime’s “Penny Dreadful,” Riff Raff in Fox TV’s Rocky Horror Picture Show and originating the role of Peter Parker in Julie Taymor and U2’s Spider-Man Turn Off The Dark.

He is a musical idiot savant. Singing on perfect pitch, playing an array of instruments and taking melodies to really interesting places, watching Carney is musical nirvana. This man’s music has the power to heal and transcend.

The first song of the night was “Intention,” from his  five-time Independent Music Award-winning album, Youth Is Wasted. Youth is Wasted, was recorded primarily in his New York apartment. During his demanding Spider-Man schedule, it was impossible to get back and forth to the studio, so Reeve decided to build his own studio-right in his living room. His bizarre Broadway hours also made teaming up with other musicians all but impossible, so Reeve took matters into his own hands, literally, playing every single instrument himself. Thus, the album has a homespun quality, a la Paul McCartney’s Ram-which just so happens to be Reeve’s all-time favorite album. Carney also sang “Happiness” from this album.

“Mr. Green,”” Amelie,”” There She Goes” and ” Resurrection” also from Youth is wasted made up a bulk of the concert. I could hear these songs a hundred times and they always feel fresh.

Showing off his softer side the romantic “Alright”.

Reeve’s second to last song was the standard “Somewhere Over The Rainbow” which became a profound want and blend of instruments and want.

My favorite song in the Carney cannon is a song called “Testify” also from the Youth Is Wasted album. Last night it became a 20 minuet mash-up with “We Build The Walls” from Hadestown and it was truly magical.

It boggles my mind why this man is not a bonafide star playing for thousands on the stages of the world. However, their loss is NYC gain.