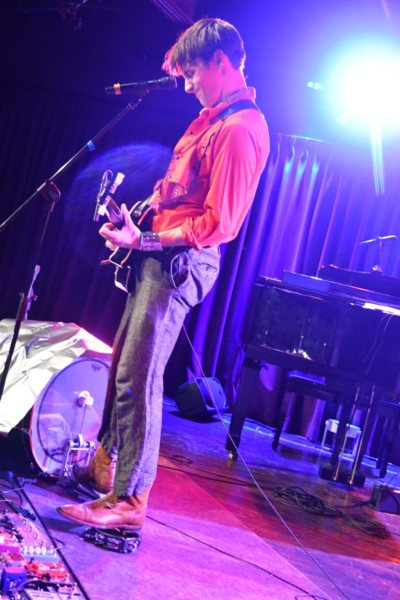 Reeve Carney, Grammy Award-winning star of Broadway’s Hadestown, renewed his spring residency at The Green Room 42, returning to the club after a string of sold-out solo concerts over the last two years. In the February concert Reeve highlighted songs from his original five-time Independent Music Award-winning album, Youth Is Wasted.

Starting out with the country blues song “My Father’s House”, Reeve pays tribute to Jonny Lang. This soulful song brings you to the realization that there is room for in heaven for everyone. This was my first time hearing this song and it’s impact brought me a even more deeper appreciation for his writing talent.

Giving us a sampling of his album with “Intention”, “Easier Said Than Done” and “Resurrection”.

Reeve’s guitar work was so amazing we added more of “Resurrection” going into Elton John’s “Don’t Let The Sun Go Down on Me”.

From his album Mr. Green Volume 1, done with his siblings “Amelie” and “I Think of You”.

Many of Reeve’s original tunes are hauntingly beautiful. With lyrics that sate “A new love, putting your heart on the line. Hearts are so fragile. So much power in the past. Doing everything to hold onto that love in your heart. So much struggle and courage in this piece and you feel it all. Trust with one’s heart…”Checkmate”.

Surprisingly Reeve still has to audition for roles and lost out to Colin Donnell in Almost Famous. Reeve told me he is uncomfortable auditioning, but if you’ve ever seen him perform live it will boggle your mind how casting directors have not fully utilized his talents.

The addicting “Resurrection”, a cover of Elton John’s “Don’t Let The Sun Go Down on Me” and “There She Goes” (Mr. Green Volume 1), a song about the torture of unrequited love.

Ending the show was my favorite of all Reeve’s songs. I could seriously listen to “Testify” (Mr. Green Volume 1) every night of my life. This rock song is magical weaving you in its trace like spell. Reeve’s guitar playing reminds me of Hendrick’s and it baffles my mind he is not playing in stadiums like Madison Square Gardens.

Of course there was an encore and Reeve ended it with his peaceful lullaby “Up Above The Weather”filling the room with hope for tomorrow.

He originated the role of Peter Parker/Spider-Man in the record-breaking Broadway musical, Spider-Man: Turn Off The Dark. A lifelong musician, Reeve re-team with director Julie Taymor. He originally worked with in her film, The Tempest. In 2013, he played Dorian Gray in Showtime’s “Penny Dreadful.” Reeve’s album, Youth is Wasted, was recorded primarily in his New York apartment. In an upcoming Jeff Buckley biopic.