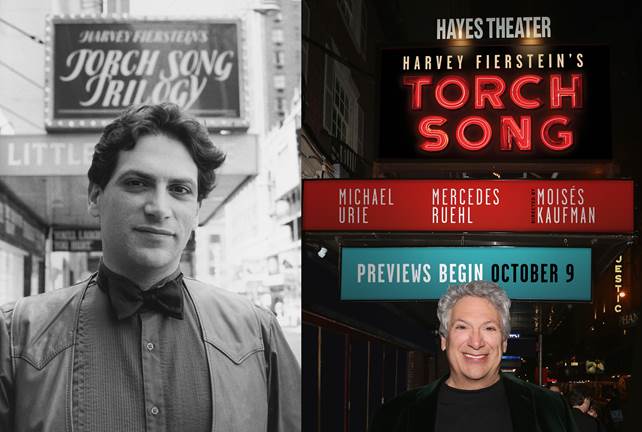 Rehearsals commence today for the new Broadway production of Harvey Fierstein’s Torch Song, which will play Broadway’s Hayes Theater (240 West 44th Street), the same Broadway stage where the Tony Award®-winning 1982 premiere forever changed the face of popular entertainment and ushered in a new era of American understanding of love and family.

Mr. Fierstein said, “Forty years after writing Torch Song, it still speaks to audiences making them laugh and weep and happy. Unbelievable. And to now return to the theater where it played all those years ago… Beyond wishes… Beyond dreams… Beyond the most outrageous fantasy.”

Fiercely funny and heart-wrenching, Harvey Fierstein’s Torch Song follows Arnold Beckoff’s (Mr. Urie) odyssey to find happiness in New York. All he wants is a husband, a child, and a pair of bunny slippers that fit, but a visit from his overbearing mother (Ms. Ruehl) reminds him that he needs one thing more: respect.

Torch Song Trilogy first premiered on Broadway in 1982 at the Little Theatre, now the Hayes Theater, where it ran for three years. Written by and starring Mr. Fierstein, Torch Song Trilogy won Tony Awards for Best Play and Best Actor in a Play. Now, 36 years later, this landmark play returns to the Hayes under the title: Harvey Fierstein’s Torch Song.

Tickets can be purchased at telecharge.com or by calling 212-239-6200. Group discounts are available for groups of 10 or more through Givenik/Jujamcyn Group Sales by calling 212-840-8181.

To learn more about the show, please visit www.torchsongbroadway.com.