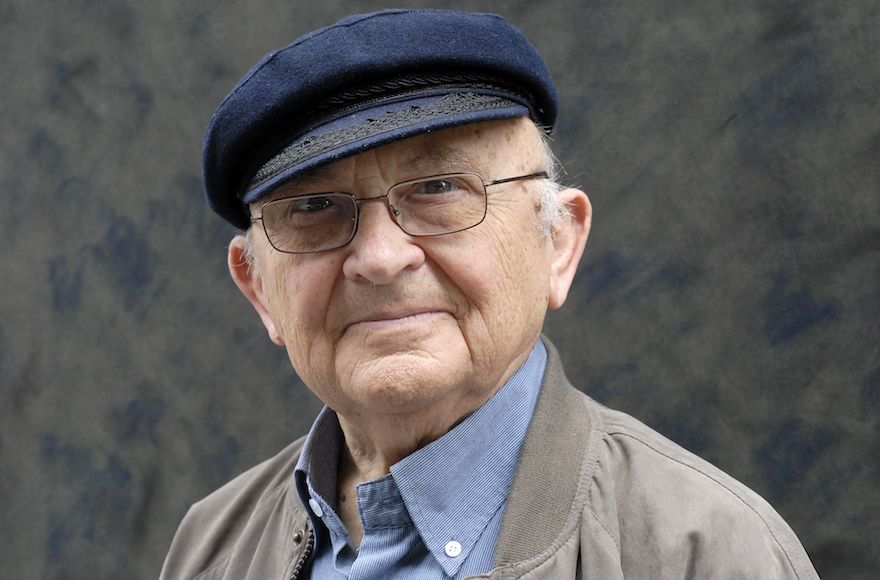 Arguably the world’s greatest writer of fiction about the world’s foremost nonfiction atrocity, the Holocaust, died Thursday in Israel. Aharon Appelfeld, a Holocaust survivor himself and one of the icons of Israel’s first generation, was 85. No writer captured and reclaimed the lost world of European Jewish life with as much imaginative intensity and heartfelt longing.

The author of over 40 books, written in Hebrew and translated around the world, he was the recipient of the State of Israel Prize for Literature in 1983, and a finalist for the Man Booker International Prize in 2013. Like the surreal events that shaped him, however, Appelfeld was a writer of great elusiveness and paradox. While he was known as a Holocaust writer, a label he rejected, he was also a man, and a fiction writer, who was nearly impossible to categorize.

After all, he was orphaned at 8 years old when his mother was murdered by the Nazis and he and his father were sent to a concentration camp in what is now Ukraine. Separated from his father, Appelfeld did not realize until 20 years later that he, too, had survived. They miraculously reunited in Israel — a reunion he was never able, emotionally, to write about.

Everything else he experienced, however, he reimagined feverishly. No writer who survived the Holocaust, and whose memories inspired their writings, had been dealt such a vividly colorful and yet traumatizing childhood experience. Although a small boy, Appelfeld escaped from the camp and lived in small towns and the forests of the former Austrian-Hungarian Empire — creases in the geography of Romania, Transylvania and Bukovina. He lived among and was helped along by horse thieves, fortune-telling Gypsies, self-described witches and working-girl prostitutes. He became a shepherd and a caretaker of lame horses. Later he worked as a cook for the Soviet army. All this before a bar mitzvah he was still too young to have and, given everything else, God would not have noticed.

A prostitute became his surrogate mother. Each night, he once told me, in a studio flat through the scrim of a hanging bedsheet that separated his tiny bed from the larger one of his caretaker, all made luminous by ambient light, he watched his guardian angel sexually satisfy her drunken clientele — the boy observing through the projected screen, hearing the moans and grunting sounds, seeing shadowy movements that ushered him into accelerated puberty. In the upside-down world of the Nazis, this kindhearted prostitute became his Mother Theresa.

This was the degenerate world that he knew, and that had oddly raised and protected him. He was too young to appreciate that he had being given a choice between a death camp and a madhouse. His life was saved by the latter. Such indelibly sordid memories on the lam provided him with the gift of a grist few writers — Jewish or otherwise — could ever imagine.

Appelfeld’s characters live out their days in advance of the oncoming devastation, seemingly oblivious to what lies ahead, naively focusing on trivial details instead of the Nazi menace that would soon nearly erase all of Jewish life in Europe.

His writing was spare and allegorical; he was a teller of tales rather than a chronicler of the ungodly details of murder. He intentionally never wrote about the camps, gas chambers, killing fields or death marches. But he wrote poignantly about the aftermath, the hesitant, halting and improbable recovery of the survivors both in Europe and in Israel.

Arriving in Israel two years before its creation, he quickly learned Hebrew, which added to his survival kit of six other languages. Unlike the other notable Israeli fiction writers — A.B. Yehoshua, Amos Oz and David Grossman — Appelfeld wrote mostly about the impending dead and the broken remains of Jewish life before and after the Holocaust. Among Israeli society starting anew and glorifying the bronzed farmers and chiseled soldiers of the IDF, Appelfeld was admired, but regarded as a relic of a time the nation wished to forget, or at least gloss over. This is one of the reasons why he was as widely read in the Diaspora as within Israel itself — a European writer displaced in the new Jewish homeland.

Which all made sense for other reasons of European symmetry. No one would have wished such a childhood on anyone, but fate cares little for what’s fair, and Appelfeld was uniquely equipped to make fine use of so rich a legacy — and proximity to fellow men of European letters. Although younger by several years, he grew up on the same street in Bukovina as the novelist-essayist Joseph Roth and the German poet Paul Celan, the latter also a Holocaust survivor. What a glittering literary address, an urban incubator of Jewish writing of the highest order. Three men of short stature, but giant Jews with outsized reputations, preordained to recall and retell.

Appelfeld was also linked to Celan in other ways. Along with Elie Wiesel and Imre Kertesz, Appelfeld was among the few writers who survived the Holocaust, wrote about the experience and didn’t end his life by suicide. Each of the others — Celan, Primo Levi, Jerzy Kosinski, Piotr Rawicz, Jean Amery, Tadeusz Borowski and even Bruno Bettelheim — did. The only one to live and write in Israel, however, was Appelfeld. Perhaps his contributing role in the resurrection of his people enabled him to look beyond the nightmare and sidestep the trauma.

Over a decade ago, the literary scholar and Holocaust survivor Geoffrey Hartman invited me, Appelfeld and the American novelist E.L. Doctorow to speak at Yale University about the fictional and testimonial elements of Holocaust literature. (Yes, I did feel humbled and outmatched.) Appelfeld spoke about his use of fiction to conceal some truths while revealing perhaps far more profound emotional ones. Doctorow, cagily, approached the lectern and merely recited an inventory of personal artifacts the Nazis had confiscated from Jews as they first entered the concentration camps: “shoes, eyeglasses, thimbles, coats, hats, wallets, scarves, prosthetics, teeth …”

Simple possessions, emblematic of a lost world. Cruelly taken away and forever gone.

And the more precious: Hartman died last year; Doctorow, the year before. And now Appelfeld, gone, too.

(Thane Rosenbaum is a novelist and the author of “The Golems of Gotham,” “Second Hand Smoke,” “Elijah Visible” and, most recently, “How Sweet It Is!”)

**Re-printed with permission from Mr. Rosenbaum. The article originally appeared in the JTA.

Suzanna BowlingJanuary 6, 2022
Read More
Scroll for more
Tap
The Homeless Get Help and Their Stories Told By Influencers, Celebrities and Bloggers
A Great and Emotional Loss In The Death of Singer Dolores O’Riordan