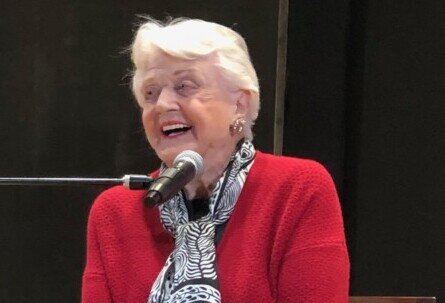 She was made a Dame, but Angela Lansbury was the grand dame of Musical Theatre. Irish-British and American Angela’s career spanned eight decades. She won the hearts of  audiences in film, theatre and TV. Born to Irish actress Moyna Macgill and English politician Edgar Lansbury, a young Angela escaped the Blitz, by moving to the United States in 1940, studying acting in New York City. Hollywood called in 1942, she signed to MGM and obtained her first film roles, in Gaslight (1944), National Velvet (1944),

and The Picture of Dorian Gray (1945), earning various awards. She appeared in 11 more MGM films, mostly in minor roles, and after her contract ended in 1952, she began to appeared in theatre. In 1962 The Manchurian Candidate (1962) received widespread acclaim and Angela moved into musical theatre.

In April 1957, Angela debuted on Broadway at the Henry Miller Theatre in Hotel Paradiso, a French burlesque. Then A Taste of Honey at the Lyceum Theatre.

Her first appearance in a musical was the short-lived Anyone Can Whistle, at the Majestic Theatre.

When Angela’s personal life to center stage Angela moved from California to Ireland’s County Cork in 1970.

She continued to make theatrical and cinematic appearances throughout that decade, including leading roles in the stage musicals Gypsy

and The King and I

as well as in the Disney film Bedknobs and Broomsticks (1971).

Moving into television in 1984, she achieved worldwide fame as Jessica Fletcher in Murder, She Wrote, which ran for twelve seasons until 1996, becoming one of the longest-running and most popular detective drama series in television history.

She also moved into voice work, contributing to animated films like Beauty and the Beast (1991) and Anastasia (1997). In the 21st century, she toured in several theatrical productions and appeared in family films such as Nanny McPhee (2005) and Mary Poppins Returns (2018).

At the time of her death, Lansbury was one of the last surviving stars from the Golden Age of Hollywood. Among her numerous accolades were six Tony Awards (including a Lifetime Achievement Award), six Golden Globe Awards, a Laurence Olivier Award, and the Academy Honorary Award, in addition to nominations for three Academy Awards, eighteen Primetime Emmy Awards, and a Grammy Award.

Angela Lansbury died in her sleep at her Los Angeles home on October 11, 2022, aged 96 and she will be forever missed.