Remembering Emmett Till at NYMF on His Birthday 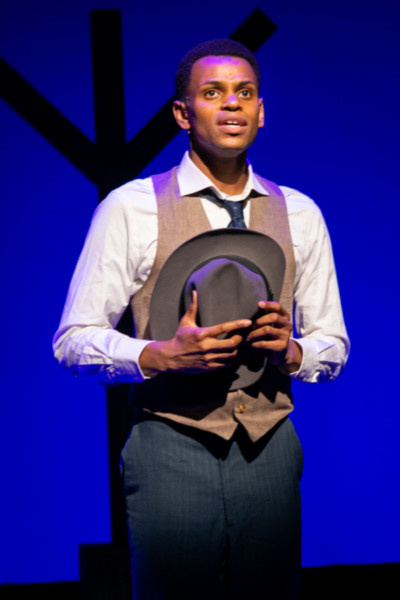 Remembering Emmett Till at NYMF on His Birthday

Emmett Louis Till was born on July 25, 1941 and died August 28, 1955. He was a 14-year-old African American who was lynched in Mississippi after being accused of offending a white woman. The brutality of his murder and the fact that his killers were acquitted drew attention to the long history of violent persecution of African Americans in the United States. Till became an icon of the Civil Rights Movement and today would have been his birthday.

The new musical Till brings to life Emmett (Taylor A. Blackman), who was born and raised in Chicago. During a summer vacation, he visited his relatives near Money, in Mississippi. He spoke and was accused with flirting and whistling at 21-year-old Carolyn Bryant, the white married proprietor of a small grocery store. Several nights after the store incident, Bryant’s husband Roy and his half-brother J.W. Milam went armed to Till’s great-uncle’s house (Dwelvan David) and abducted the boy. They beat and mutilated him, shot him in the head, strung barbed wire and a 75-pound metal fan around his neck and dumped his body in the Tallahatchie River. Three days later, Till’s body was discovered and retrieved from the river, barely recognizable.

Till’s body was returned to Chicago where his mother (Denielle Marie Gray) insisted on a public funeral service with an open casket. Tens of thousands attended his funeral or viewed his open casket, and images of his mutilated body were published.

Til has music and lyrics by Leo Schwartz and book by Schwartz and DC Cathro. Sadly the book for this show drags. There is not an immediacy of this time line, to what had a hand in the Civil Rights Movement. Since I was born long after Emmett was brutally killed, I did not know this story. it should have broke my heart with the music and the storyline and it didn’t because I was never brought to an emotional involvement. The music though gloriously sung, did not drive the storyline.

NJ Agwuna direction needs to tighten up. His actors take too much time overindulging in emotions instead of allowing the audience to feel. Choreographer Kenny Ingram, keeps this show joyous, so that when the darker parts of this story unfold, we have those levels. Music Director Lena Gabrielle, gets fabulous harmonies out of this cast and it is heavenly. Projection Designer David Goldstein keeps us knowing where we are at, but I wish that in the end those photo’s of Emmett, which are brutally disgusting were shown. I have since seen what they did to this poor boy and it is emotionally heartbreaking, especially since his murders got off scott free.

I hope that these writers keep working on Till, because it has the possibility to be really moving and say a great deal. It is warming to know that on Emmett’s 78 birthday, his story is being told.

Till: Produced by NYMF and Flying Elephant Productions at The Alice Griffin Jewel Box Theatre at The Pershing Square Signature Center, Friday, July 26th at 1:00 p.m. and Sunday, July 28th at 9:00 p.m.