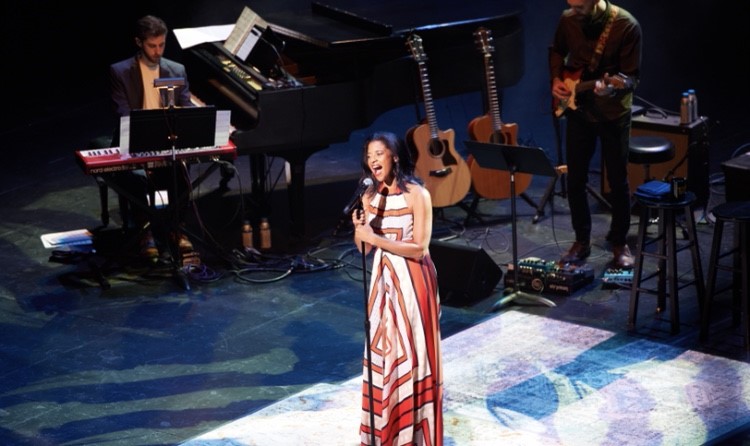 It is not everyday that Tony Award-winning chanteuses drops by to entertain in the Windy City, so it was with great anticipation that Renee Elise Goldsberry took to the Auditorium Theatre’s landmark stage for a night of music and stories centered around love. Best known for her Grammy winning work as Angelica Schuyler in the blockbuster musical Hamilton, for which she was awarded the trophy in 2016 as Best Featured Actress in a Musical. True fans also know her as Evangeline Williamson from ABC’s daytime drama One Life To Live. Her time in the fictional town of Landview, from 2003-2007, left her with nights-off to repeatedly appear on Broadway. Pulling double duty, she also played Mimi in the closing company of RENT, Nala on Broadway in Disney’s The Lion King and Nettie Harris in the original cast of Broadway’s The Color Purple. Since 2021, Goldsberry is one of the leads on the Tina Fey penned Peacock musical comedy, Girls5Eva. This laugh-out-loud series chronicles the reunion and attempts to reignite stardom of a one-hit wonder girl band from the 1990s, of which Goldsberry plays self-absorbed diva, Wickie Roy. Tonight however was just about music. 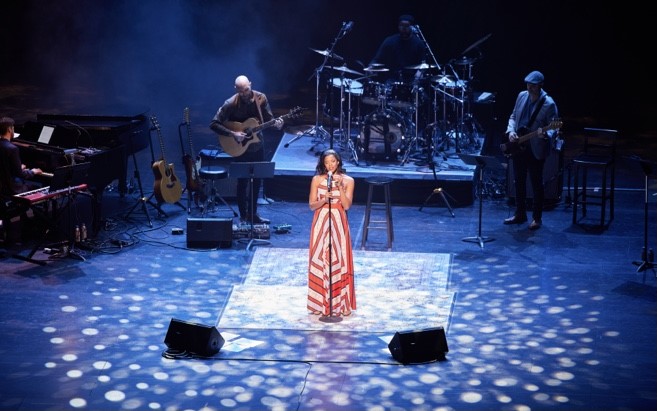 Demonstrating her silky smooth vocals, the music selected ran the full genre gamut, including a mix of jazz, hip-hop, pop, blues, funk, soul and showtunes. Partnered with New York based Musical Director, Jordan Peters, and armed with a small band including Jeff Hanley on Bass, drummer Zachary Mullings, pianist Andrew Freedman and a trio of backing vocalists, Crystal Monee Hall, Kristina Nicole Miller and Tasha Michelle. The show opened with the Barbra Streisand classic “On A Clear Day You Can See Forever” & Jimmy Cliff’s “I Can See Clearly Now”. Sharing she has been touring off and on with this show since 2018, Goldsberry quipped whether “playing Red or Blue States, we are all linked through music”. Firmly a Blue City, she also joked in a contest for greatest city, “I think Chicago could win”.

She also took a moment to share how wonderful it was to be performing at the Landmark Auditorium Theatre. “There is so much history on this stage. Booker T. Washington. Aretha Franklin….and now me”.

Exclaiming this show is a “blatant attempt to manipulate you to fall back in love with love”she next crooned her way through Jeff Beck’s “Train to Jordan” and Patty Griffin “Up to the Mountain”.

Pausing for a moment of levity, she asked the audience “have you ever called home and regretted it?” Further explaining she face-timed her family earlier in the day, only to be met with squabbling and tears on the other end. Next she shared she is currently working on an upcoming “documentary about me produced by (Tony Award-winners) Kelli O’Hara and Audra McDonald.” The show will detail her delicate balancing act between Broadway success and becoming a parent. Admitting her shortcomings, she ended this segment exclaiming she prefers being a “better example if you’re not perfect at something.”

Storytime wasn’t over, sharing with gleeful pride “My name was dropped by the Queen of Soul!” as Aretha Franklin hit up Lin-Manuel Miranda in a often replayed voicemail for tickets to see Hamilton back in its heyday. Simon & Garfunkel’s “Bridge Over Troubled Water”, 1955 film Carmen Jones’ “Beat Out dat Rhythm on a Drum”, Nancy Wilson’s “(You Don’t Know) How Glad I Am” and Henry Mancini & Sarah Vaughan “Peter Gunn” Theme filled out the middle of the show quite enjoyably.

The audition process can be a challenge for anyone. Goldsberry is no different, sharing part of her audition process for Disney’s The Lion King which was then scheduled to happen on September 11, 2001. Yes, THAT September 11th. One of the worst days in American history didn’t stop the taskmasters at Disney at looking for performers. Finding strength in song, she nailed the audition and subsequently joined the Broadway cast as Nala in 2002. She followed up the story singing that show’s “Shadowland”.

After a quick shout out and thank you to director Gary Griffin, in the audience that nice, it was time for the songs everyone came to hear. Sharing the career defining Hamilton was a “very, very good time” she started the ballad “Satisfied”, with audience members spontaneously filling in for the missing cast members segments of the song. Encouraging those same audience members to get up and dance, she ended this segment with a lively rendition of the empowering anthem “The Schuyler Sisters”.

The most touching moment of the show was a stunning rendition of RENT’s “Without You” acknowledging her appreciation for the “powerful storyteller, Jonathan Larson.” Joking she was “ending with a song from a musical I’ve never been in” the evening concluded with a lovely version of Carousel’s “You’ll Never Walk Alone.” At 51, Renee Elise Goldsberry is a determined dynamic diva with no signs of slowing down.

RossJune 10, 2022
Read More
Scroll for more
Tap
Conversation With Adam Gwon
The Last Boy Remembering the History of Vedem Magazine and the Holocaust That Took Them