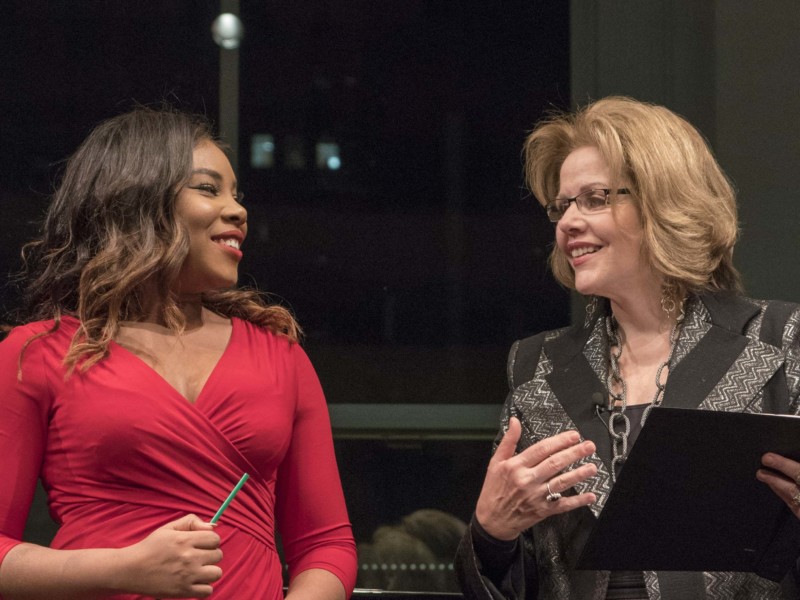 From January 21–26, 2019, renowned soprano Renée Fleming will mentor 10 aspiring young singers and 10 collaborative pianists from around the world in the inaugural year of SongStudio, an innovative new program exploring the future of the vocal recital. Building on Marilyn Horne’s remarkable work with The Song Continues, the intensive workshop will bring emerging vocalists and pianists together with leading artists and composers for a week of instruction and performance at Carnegie Hall.

“I fell in love with song literature through Marilyn Horne. I’m grateful that she devoted her artistry and agency to this art form. SongStudio has evolved out of her contribution,” said Ms. Fleming. “My initial goal, beyond honing skills crucial for this art form, will be encouraging singers to be more adventurous in their approach to performance, and to experiment with incorporating movement, media, and unconventional repertoire and venues.”

The week will feature special guest composers, vocalists, and other artists from a wide variety of disciplines lending their insights and expertise. On Monday, January 21 at 7:30 p.m. in Carnegie Hall’s Weill Music Room, composers John Musto, Paola Prestini, and Chris Thile, along with sopranoDawn Upshaw will join Ms. Fleming for “What Composers Want,” a panel discussion exploring the collaborative process between singer and composer, including performances of works by these and other contemporary composers.

Nico Muhly will serve as SongStudio’s first composer-in-residence, working with the singers and pianists on a cross-section of his vocal music. On Thursday, January 24 at 7:30 p.m., he will join Ms. Fleming for a discussion and masterclass dedicated to his vocal writing, with performances by SongStudio artists.

A series of Open Studio sessions for the young singers and an invited audience will include a presentation on theatrical approaches to the recital from acclaimed stage director Kevin Newbury; a workshop about programming strategies with Steven Blier, Artistic Director of the New York Festival of Song; a seminar on German lieder by Eastman emeritus professor Jürgen Thym; and a session devoted to poetry and text analysis.

All participating singers and pianists will receive private coaching throughout the week, learning from teachers, coaches, and collaborative pianists Javier Arrebola, Hartmut Höll, Bénédicte Jourdois,J.J. Penna, and Gerald Martin Moore. There will be a master class by Mr. Höll, focused on the art of the collaborative pianist, for an invited audience on Friday, January 25 at 4:00 p.m.

The week will culminate in informal pop-up performances throughout the city on Saturday afternoon and a final “Young Artists Recital” on Saturday, January 26 at 7:30 p.m. in Carnegie Hall’s Weill Music Room.

Following a rigorous audition process open to talented young singers and collaborative pianists from around the world, ten pairs of musicians have been selected to participate from China, France, Iceland, Ukraine, and the United States:

Renée Fleming is one of the most highly acclaimed singers of our time. In 2013, President Obama awarded her the National Medal of Arts, and in 2014 she became the first classical artist ever to sing “The Star-Spangled Banner” at the Super Bowl. Winner of four Grammy Awards, she has sung for momentous occasions from the Nobel Peace Prize ceremony to the Diamond Jubilee concert for Queen Elizabeth II at Buckingham Palace.

Ms. Fleming was nominated for a Tony Award this year for her performance on Broadway in Rodgers and Hammerstein’s Carousel. She was also named Female Artist of the Year at the 2018 Classic BRIT Awards. Her recent tour schedule has included concerts in London, Vienna, Paris, Madrid, Tokyo, and Beijing. She is heard on the soundtracks of the Best Picture Academy Award winner The Shape of Water and Three Billboards Outside Ebbing, Missouri, and provided the singing voice of Roxane, played by Julianne Moore, in the film of the best-selling novel Bel Canto. As artistic advisor to the John F. Kennedy Center for the Performing Arts, Ms. Fleming spearheads a collaboration with the National Institutes of Health focused on music, health, and neuroscience.

Ms. Fleming’s new album, Renée Fleming: Broadway, was released in September 2018 by Decca. This year, she has the rare distinction of being nominated for Grammy Awards for both Best Opera Recording and Best Musical Theater Album. She has recorded everything from complete operas and song recitals to indie rock, jazz, and the soundtrack of The Lord of the Rings. Among her awards are the Fulbright Lifetime Achievement Medal, Germany’s Cross of the Order of Merit, and France’s Chevalier de la Légion d’Honneur.

Renée Fleming leads a master class that features young artists from SongStudio, showcasing emerging vocalists and collaborative pianists from around the world. A renowned performer and a passionate advocate for the art of singing, Fleming serves as coach, helping the young musicians hone their artistry as the audience observes the fascinating process.

Composing for the Voice

Nico Muhly, SongStudio’s composer-in-residence, and Renée Fleming share insights about the unique challenges and possibilities of writing music for an instrument as powerful, sensitive, and diverse as human beings can be. SongStudio participants will perform Muhly’s work and be coached by the composer.

Watch as world-famous tenor Piotr Beczała coaches emerging singers and pianists in the nuances of song interpretation. Bringing “warmth, flexibility and crisp confidence” (Opera News), the international opera star and acclaimed recitalist shares his expertise and technical knowledge with the young vocalists of SongStudio in a public master class.

Marking the culmination of the inaugural SongStudio program, Renée Fleming hosts a recital that features the 10 emerging vocalists and 10 collaborative pianists who have trained with her throughout the weeklong intensive workshop. Marvel at these artists’ talent and glimpse the bright future of this time-honored, evolving art form.

Lead support for workshops and master classes is provided by Beatrice Santo Domingo, and Mr. and Mrs. Anthony B. Evnin and A.E. Charitable Foundation.

Workshops and master classes are made possible, in part, by Mr. and Mrs. Nicola Bulgari.

The Joan and Sanford I. Weill Music Room is located on the Lily and Edmond J. Safra Education Floor of the Judith and Burton Resnick Education Wing.

Bank of America is the Proud Season Sponsor of Carnegie Hall.