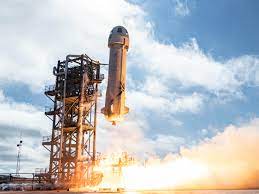 Blue Origin concluded the online auction for the very first seat on New Shepard with a winning bid of $28 million. Nearly 7,600 people registered to bid from 159 countries. The winning bidder flew to space on New Shepard’s first human flight in July 20, and was joined by Blue Origin founder, Jeff Bezos, and his brother, Mark.

The veteran auctioneer was Steve Little who gave anonymous bidder No. 107 a secured open spot on the first-ever crew to fly on Blue Origin’s spaceship.

The sum was donated to Club for the Future, Blue Origin’s foundation, to, as the company says, “inspire future generations to pursue careers in STEM and help invent the future of life in space.” Little, working on behalf of his longtime associates RR Auction, not only made an exciting contribution to the huge production spotlighting America’s new high profile space race. Right now, Little is the most famous auctioneer in the world. Little has a history auctioning other space-related memorabilia for RR Auction – perhaps most prominently, securing $1.7 for the only privately owned wristwatch to ever be on the surface of the moon. The watch belonged to David Scott, the commander of Apollo 15. His NASA issued watch had broken in flight and he used his own watch to time his moonwalk. Embedded in the Velcro was moondust from the mission.

For Little, serving on behalf of auction houses like Boston based RR Auction and Chevy Chase, MD based Sloans & Kenyon Auctioneers and Appraisers, it’s always the big ticket, celeb driven items that make him the hit of dinner tables at events and cocktail conversations. High profile pieces he’s auctioned off include a painting by Claude Monet ($8.7 million), a behind the scenes day at the Masters Golf Tournament ($50,000), the desk where the Nuclear Test Ban Treaty was signed in 1963, letters John F. Kennedy had written to the mother of one of the men who died under his watch during the sinking of PT-109 during WWII, a few locks of Lincoln’s hair and a
Woodstock program signed by Jimi Hendrix. On behalf of the Breitling watch company, Little also once auctioned a watch that had been on a nonstop balloon flight around the world; the watch was worth $4500 but sold for $70,000.At the lower, less glamorous end, Little once sold a painting by a third grade class for $9,000 – but he’s always honored and gratified to be part of the process of raising money for important causes.

Over the years, he has worked with high profile organizations of all sizes – including Dance Theater of Harlem, Washington Performing Arts, National Kidney Foundation, the American Heart Association, and more.

Little, launched his career in the early 90s as a full time Estates and Trusts Officer with C.G. Sloan and Company before becoming an independent contractor for many auction houses. “I love being a pivotal part of a congenial effort to help a good cause”. Little equates the emceeing duties, his ability to “work a room” and the dynamic vocal cadences of being an auctioneer to the skills that have served him during his many years as a professional singer and musician, playing thousands of concerts, weddings, funerals, birthday and holiday parties throughout the Mid-Atlantic region over the past 25 years. This multi-talented performer – a guitarist and pianist who has been a professional musician since age 15. Just like at auctions, it’s all about bringing a little rhythm and joy to people’s lives.

ElizaBeth TaylorMay 16, 2022
Read More
Scroll for more
Tap
What to Watch: August 5
Theatre News: Pass Over, The Show Must Go On, Waitress, Bedlam and Letters Of Suresh