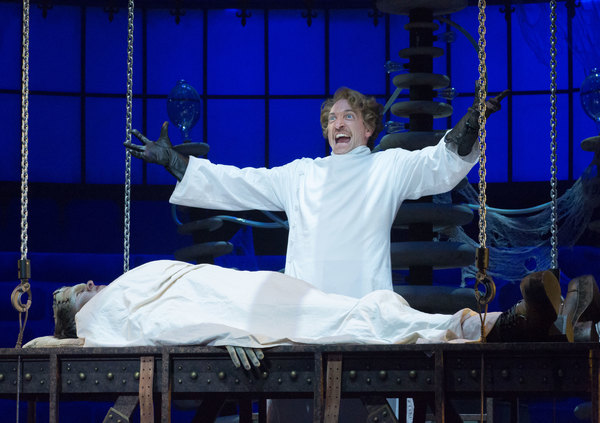 Alive and kicking, Mel Brooks’ Young Frankenstein – The Musical, jump starts the Walnut Street Theatre’s 211thSeason. Based on Brooks’ 1974 parody of the horror film genre, Young Frankenstein, it debuted on Broadway in 2017.  This production is the revised, London version which opened in London’s West End at the Garrick Theatre in 2017. In addition to a revised script and lyrics by Mel Brooks, six original numbers have been excised and two new ones inserted. The result is success! Having seen the original Broadway production and not been duly impressed, I can say without equivocation that this iteration is simply terrific.

Frederick Frankenstein leaves the Anthony & Johns Hopkins School of Medicine in New York to travel to Transylvania to take over his family’s estate after the death of his grandfather. His plans to stay a few weeks are sidetracked when he is urged to stay on by Igor, his hunchbacked servant and Inga, a beautiful blonde assistant. After discovering his grandfather’s secret laboratory and reading his Laboratory Notes, Frederick is seduced into thinking that he too could reanimate the dead and bring them back to life.

The leads are stellar. Ben Dibble is the cat’s pajamas as Dr. Frederick Frankenstein. Vocally he is tops, he can tap dance and is as funny as hell.  Casey Elizabeth Gill is marvelous in both voice and demeanor as the prudish Elizabeth Benning (Please Don’t Touch Me) who turns vamp once she meets the monster (Deep Love).  Alanna J. Smith is perfect as the sexy Inga with the stratospheric voice (Roll in the Hay). Luke Bradt is a hoot as the faithful humpbacked servant Igor, chewing the scenery whenever possible. Mary Martello is a zaftig Frau Blücher who does some hysterically, salacious moves with a chair in “He Vas My Boyfriend”. Fran Prisco is equally funny as both Inspector Hans Kemp and the blind Hermit and Dan Olmstead is absolutely lovable as The Monster.

The paired down eight piece orchestra led by Chris Burcheri, who is also the Musical and Vocal Director, puts out a lot of great sound.  I’m sure due in no small part to Doug Besterman and Mark Cumberland’s terrific orchestrations. The castle’s laboratory set by Robert Kovach is a mass of colorful liquid filled glass tubes, spiraling electrical contraptions and a gurney that rises to the rafters. Just as effective is the hay wagon which bumps along pulled by human horses with a background projection of the passing woods. Costumes by Mary Folino are vivid and eye catching, especially the two gowns worn by Elizabeth Benning. The choreography by Mary Jane Houdina is simple but effective and the direction by Charles Abbott makes it all tick like a well wound timepiece.

I have always been a fan of Mel Brooks music and lyrics and this show is no exception. It’s funny, it’s sexy and it’s alive theatre!

Music and Lyrics by Mel Brooks