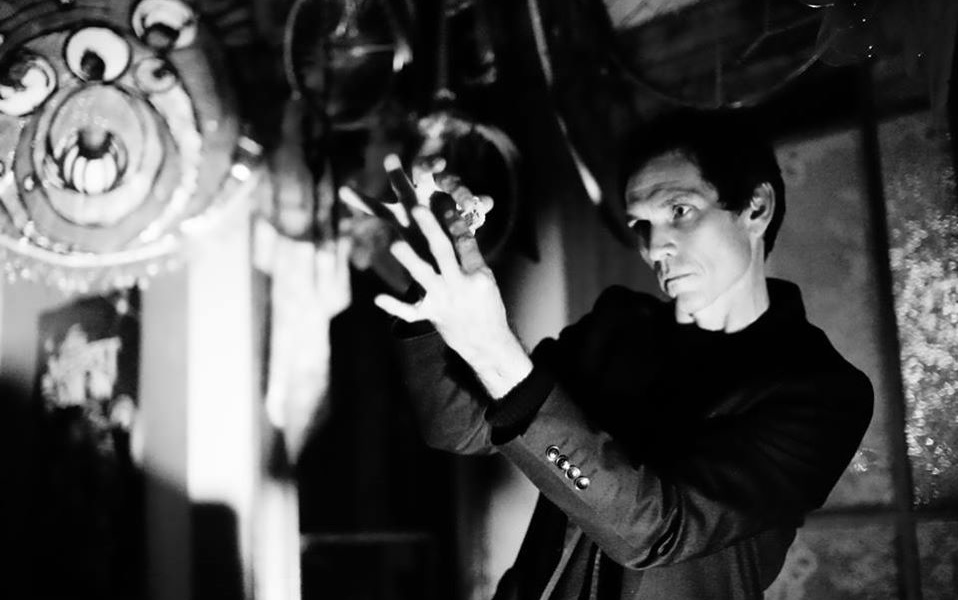 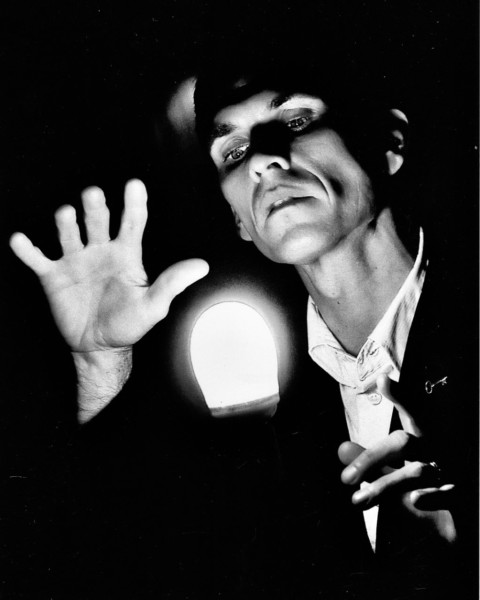 This beautiful and welcoming venue at 1328 West Morse Avenue was originally built in 1912 as a vaudeville house, and called the Morse Theater.  It was renovated in art deco style during the 1930’s.  After eighty years of other tenants, it became a live music venue called the Mayne Stage.  When the pandemic came, the theater closed again, and the building was put on the market.  The neighborhood feared developers would turn this intimate gem of a performance space into overpriced apartments.  Saving this important cultural center would take a real feat of magic. 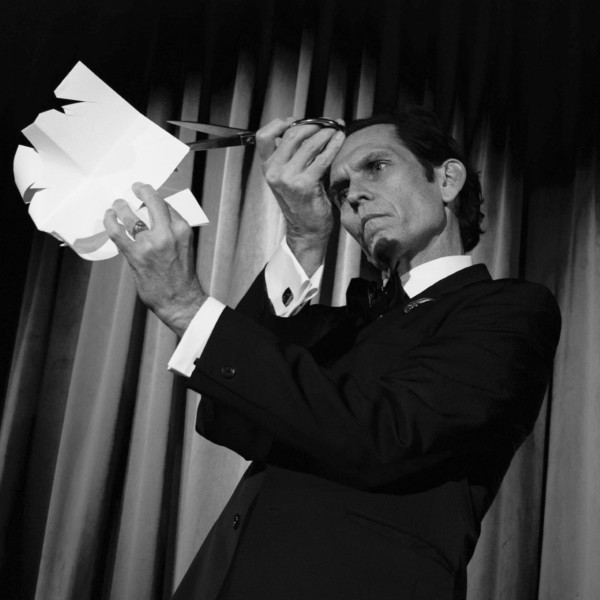 But then…abracadabra! Dr. Ricardo T. Rosenkranz, physician, Assistant Professor in Clinical Pediatrics at Northwestern University’s Feinberg School of Medicine, and a fine mentalist performer, appeared in a puff of smoke.  Dr. Rosenkranz developed his own mentalism show, called The Rosenkranz Mysteries, under the tutelage of acclaimed Chicago mentalist Eugene Berger.  I enjoyed it very much when I saw it in 2016 at Chicago’s Royal George Theater.  Sadly, that venue has since fallen to commercial real estate developers. 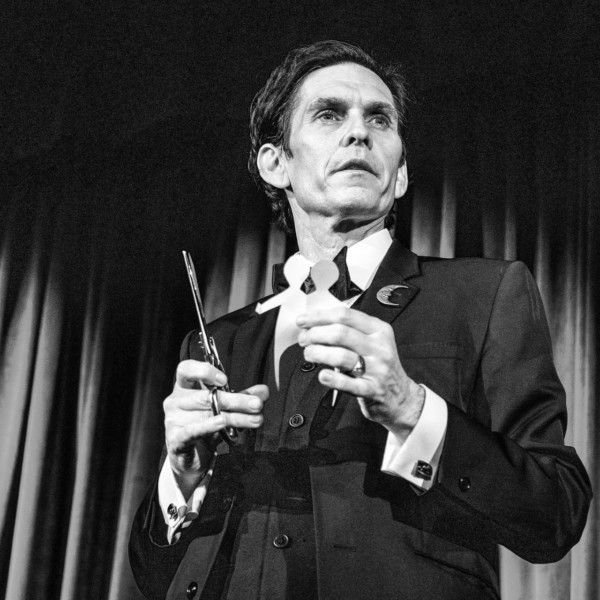 Fortunately, Chicago still had the Magic Lounge, modeled after L.A.’s famed Magic Castle.  But even there, as Dr. Rosenkranz lamented to me after the show, magic shows have shrunk from the full evening presentations which once graced our stages to abbreviated “cabaret acts.”  He wanted to create a home where a stable of magic performers could expand the form again. 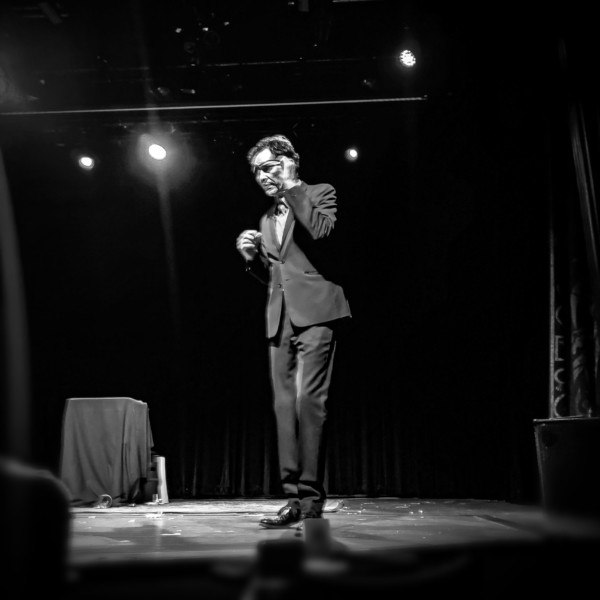 When this historic building became available, Rosenkranz waved his magic wand, and pulled a rabbit out of his hat…along with a couple million dollars, and a partner, to buy it. Now, Dr. Rosenkranz is the venue’s managing partner and artistic director. The facility has three beautiful bars at which the neighborhood is invited to escape the heat, and plans are to open a full restaurant in the fall.

I missed the inaugural performance by magician Carisa Hendrix, known professionally as Lucy Darling. But I was able to see last week’s prestidigitator, two-time Magician of the Year, Rob Zabrecky, in his show called The Zabrecky Hour.

Zabrecky’s presentation style is deliberately offbeat.  He is quiet, thin, and dark in aspect, with one eye covered in a black patch.  As that wasn’t in his publicity picture, I’m not sure if it represented a recent accident or an affectation. But it suits him.  When he performs, he never cracks a smile.  But he still rattles off brilliantly odd jokes that come at you quite unexpectedly. At moments he is deliberately a bit creepy as well, especially as he calmly cuts folded paper into surprising shapes with unnerving relish.  Imagine the fusion of Norman Bates and Steven Wright, with a touch of Edward Scissorshands, and the eye-patch wearing Bond villain, Emilio Largo, thrown in for good measure. What’s not to love?

Somewhat surprisingly, the magical effects Zabresky presents are pretty standard fare.  But the art of magic is its presentation, and his unusual style is truly unique.

In one effect, he tells the audience that his 93 year old grandfather has come to the show to celebrate his birthday. He then brings out his “grandfather” in the form of ashes in a funeral urn, on which he places a sparkly party hat before wishing it happy birthday.  That about says it all.  Then he invokes the spirit of his grandfather to invisibly ring a dinner bell, and write a funny message on a pair of blank slates to end the routine.  Being deliberately funny rather than spooky isn’t quite as anti-magic as Penn and Teller showing you how things are done.  But it does tweak our expectations regarding what a spiritualist act should be.

In other effects, he shows his excellent manipulation skills, including making small balls disappear and reappear unexpectedly, tearing a string into tiny pieces and restoring it magically, and manipulating a deck of cards that gets smaller and smaller right before your eyes.

However, there are aspects of this show which could use improvement. At the opening of the show, as a really strange and annoying voice whines in the background, Zabrecky moves through the audience with a large wrapped box, which he eventually gives to an audience member to hold.  Of course, we wait throughout the whole show for him to do something with that box. Finally, after taking his bows, he simply retrieves the box and leaves without fanfare. If you blink, you’ll miss it. So this meta comment, which is also apparently meant to upend our expectations, is simply uneffective in presentation.

He also does an extended routine, which is really just a clown gag, in which two volunteers compete for “prizes” which turn out to be not very appealing items.  There’s a funny comic button at the end, but no magic is involved in creating it. So I wondered what this was even doing in his show.

Finally, he does a faux serious effect (which is impossible to take seriously) with a disappearing and reappearing banana that didn’t quite disappear the night I came.  This felt like a throwaway bit that really should be thrown away.

In keeping with Dr. Rosenkranz’s plan to have a family of performers, Zabrecky will return from August 11 through September 24.  So he will have plenty of opportunity to further hone his magical evening.

Meanwhile, mentalist Ross Johnson will take the stage now through July 31.So here’s why you need to go to the Rhapsody Theater.  If you go see David Copperfield in Laas Vegas you’ll see big, amazing effects.  But you won’t get up close and personal like this, and certainly not with an act this edgy.  If you believe that connecting intimately with a performer is what makes live performance exciting, and you want something better than bland, you’ll find that at the Rhapsody Theater.

Dr. Rosenkranz’s plans for the venue also include reinstituting the radio broadcasts by classical music station WFMT.  He looks forward to giving local chamber music a venue appropriate to the intimate nature of chamber performance.  The elevator stage with a grand piano in the basement of the Rhapsody Theater will let him move effortlessly between the physical demands of comedy, magic and music acts in the future.

So whether you are a Chicago local, or just passing through for a visit, hop on the Red Line train to Morse Street to the Rhapsody Theater, and go see what other tricks Dr. Rosenkranz & Company have up their sleeves.

RossSeptember 17, 2022
Read More
Scroll for more
Tap
Cirque du Soleil’s Crystal Is Dazzling
Between the Lines Skips Along in a Wicked-ly Fun Way, Yet Taking the Long Way Home