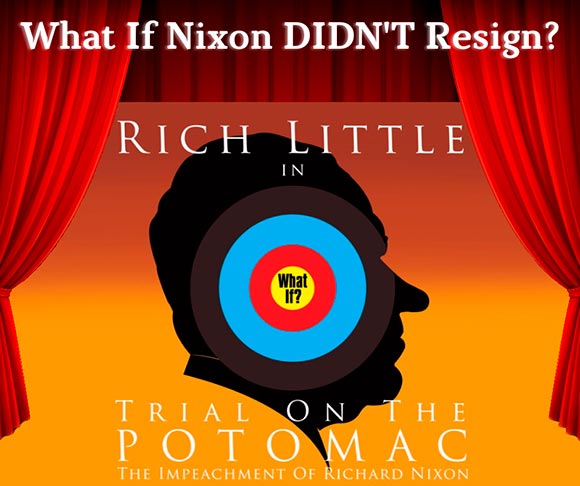 What if President Richard M. Nixon had not resigned?

What if one young lawyer uncovered the shocking truth?

What if Nixon had fought back?

Trial on the Potomac is the dramatic reimagining of the Watergate investigation and a shocking new outcome. The play is based on the real-life discoveries of Geoff Shepard, a lawyer who worked in the Nixon White House during the Watergate scandal.

This is alternative history. In our play, Nixon does NOT resign but instead stands for an impeachment trial.

Trial on the Potomac tells a tale of secret meetings, secret memos, and secret collusion that will shock America.

Playwright/Executive Producer, George Bugatti: Mentored by multi-faceted artist and creator of the “Tonight Show,” Steve Allen. His credits include “Oh What a Night for Love” (A CD produced by Steve Allen), “The Wonderful Wizard of Song, The Music of Harold Arlen” (Co-Written with Sam Arlen), “A Man with Standards” with John O’Hurly, Antonia Bennett in Concert and “Over The Rainbow, The Symphony Show.”