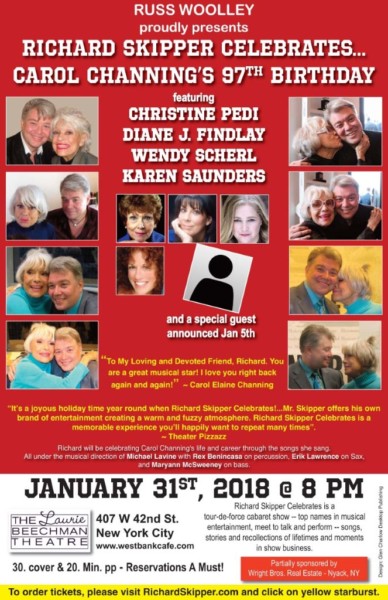 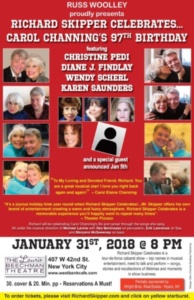 It’s a Carol celebration at The Laurie Beechman Theater (Kenny Bell, Producing Artistic Director) as Russ Woolley start the new year with the first of the Richard Skipper Celebrates…series celebrating the life and career of the legendary Broadway actress Carol Channing. The show features Christine Pedi, Diane J. Findlay, Wendy Scherl, Karen Saunders, and a special guest to be announced January 5th. All under the musical direction of Michael Lavine with Rex Benincasa on percussion, Erik Lawrence on Sax, and Maryann McSweeney on bass. 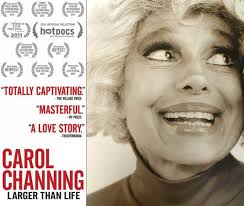 Carol Elaine Channing was born January 31, 1921. She began as a Broadway musical actress, starring in Gentlemen Prefer Blondes in 1949, and Hello, Dolly! in 1964, for which she won the Tony Award for Best Actress in a Musical. She revived both roles several times throughout her career, most recently playing Dolly in 1995. Channing was nominated for her first Tony Award in 1956 for The Vamp followed by a nomination in 1961 for Show Girl. She received her fourth Tony Award nomination for the musical Lorelei in 1974.

As a film actress, she won the Golden Globe Award and was nominated for the Academy Award for Best Supporting Actress for her performance as Muzzy in Thoroughly Modern Millie (1967). On television, she appeared as an entertainer on variety shows, from The Ed Sullivan Show in the 1950s to Hollywood Squares. She had a standout performance as The White Queen in the TV production of Alice in Wonderland (1985), and had the first of many TV specials in 1966, An Evening with Carol Channing.

Channing is an ovarian cancer survivor.

Multi-award winner and critically acclaimed Richard Skipper has an almost 40 year career which has taken him from South Carolina to New York to Hollywood and all points in between. This is part of a series that launched in May of 2016. Since starting this series Richard Skipper Celebrates has done tributes to the 53rd anniversary of Hello, Dolly! last January, birthday celebrations of Liza Minnelli, EY Yip Harburg, and many others. Richard is artist in Residence at The Laurie Beechman and currently booked through June of 2018.