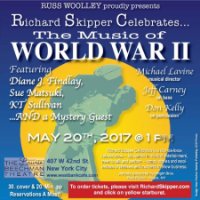 The sounds of the big bands … Miller, Dorsey, Goodman and others kept those in service to their country entertained and gave them a connection to home. Harry James and Kitty Kallen let those overseas know that those at home indeed were keenly aware that “It’s Been a Long, Long Time”. In England Dame Vera Lynn let the Allies know that soon there would indeed again be be Blue Birds Over “The White Cliffs of Dover”. USO shows gave cheer through music to the many men and women in the armed services. …Come join Richard Skipper as he celebrates those times, those musicians, those entertainers, those lyricist/composers, those songs that spread the word that soon again a nightingale would be singing in Berkeley Square! … It’s also Russ Woolley’s birthday! …. Join an afternoon of nostalgia and fine performance as Richard Skipper, for this latest show in this ongoing series, will be joined by Diane Findlay, Sue Matsuki, KT Sullivan and a very special celebrity Mystery Guest! Musical Direction Michael Lavine – Jeff Carney on bass and Don Kelly on percussion.

Richard Skipper knows everyone in Cabaret and almost EVERYONE in show business! and … almost everything about them, making him the perfect host for this ongoing Classic Variety/Talk Show format .. a tour-de-force cabaret show where top names in musical entertainment meet to talk and perform, filled with songs, stories and recollections of lifetimes and moments in show business. Previous Celebrations have included a Reunion Show for Hello Dolly cast members, A Birthday Party for Liza Minnelli and A Birthday Celebration for lyricist Yip Harburg.

“We loved celebrating Yip’s birthday with you and Richard Skipper Celebrates!”

“Richard Skipper knows how to celebrate, and with style! It’s a pure delight.” – Seth Sikes