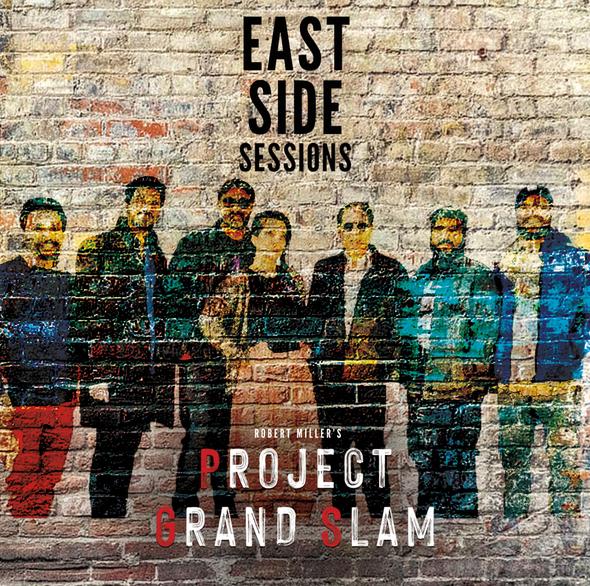 New York – Acclaimed bassist/composer/leader Robert Miller and his Project Grand Slam rock/jazz/Latin fusion ensemble released their latest album, East Side Sessions, in July, right in the middle of the pandemic. The album, buoyed by terrifically positive reviews, was augmented by several in-advance videos with hundreds of thousands of online views and many thousands of streams.

Says Miller, “The pandemic hit all musicians hard and PGS was no exception.  We had festival appearances lined up plus a European tour.  Unfortunately, all were canceled.  But creativity continues.”

“We were fortunate in that we had recently completed East Side Sessions before the world ended.  Although we could not play live in support of the album, I decided that we could make and release videos of several of the songs. The tricky part is that the videos needed to be done remotely, as the band members were all in different locations.”

“Two of the songs on the album ironically were tailor-made for the pandemic: ‘It Is A Miracle To Me’ is a positive, upbeat, life affirming song that I felt was like the musical antidote to the virus.  This was the first video that we released and it got a wonderful response.  We then followed up with a video of ‘I’m Falling Off Of The World’, a song that reflects all the craziness that the world has devolved into.  This video struck a powerful chord with the public, with over 350,000 YouTube views to date.”

“I then decided to lighten the mood a bit with our third video, this one my “cowboy jazz” song called “The Pardners”.  It’s my musical homage to the great Hollywood western films.  It’s about two partners in crime in the old West, one of whom cheats the other, and the victim seeks revenge. Amazingly, we were able to find a 1960s era Spaghetti Western movie that perfectly fit the story of the song.  The video was authentic and fun and so very different! I’m really very proud of it. “

But, perhaps the most unexpected video from the album was Miller’s re-imagined version of The Beatles’ “I Wanna Be Your Man”, originally sung by Ringo. One of Miller’s musical signatures on each album is to take an iconic 1960s song and redo it in PGS’s style. He’s done this with Cream, The Who, The Kinks and Hendrix among others.  On East Side Sessions Miller re-retitled the song as “I Wanna Be You Girl” to suit his female singer, Marilyn Castillo.

Says Miller: “For the video, again I wanted to have some fun.  So, we put together a kind of “Yellow Submarine” animated video, wonderfully done by our videographer Aaron Wilhelm, complete with references to The Beatles for younger viewers who may not know the song’s Beatles connection.  I’m pleased to say that the video is doing fabulously well on YouTube and Facebook.”

In addition to all the Project Grand Slam pandemic-era activity, Miller also found the time to record what will become his first-ever solo album, titled Summer of Love (2020).  Says Miller: “While we were doing all the videos, I was writing a whole new album’s worth of material.  This time around I decided to sing all the songs myself, including 3-part harmony on some of the tracks. My song writing has changed dramatically over the years – initially jazz fusion instrumentals, now nearly all rock/pop/jazz vocals.  The album captures the ups and downs that I and everyone has experienced over the last 6 months due to the pandemic.  The one overriding theme of the album, however, is love. Love heals. Like the Beatles, who prided themselves on writing mainly uplifting songs about love, I felt it was important during this bleak time to also write upbeat songs and love songs – but with an undertone that captures the horrors we’ve all witnessed and experienced.”

“I anticipate releasing the new album in the next several months, just as I anticipate (hope) that PGS is able to get back to playing live in the not too distant future.”