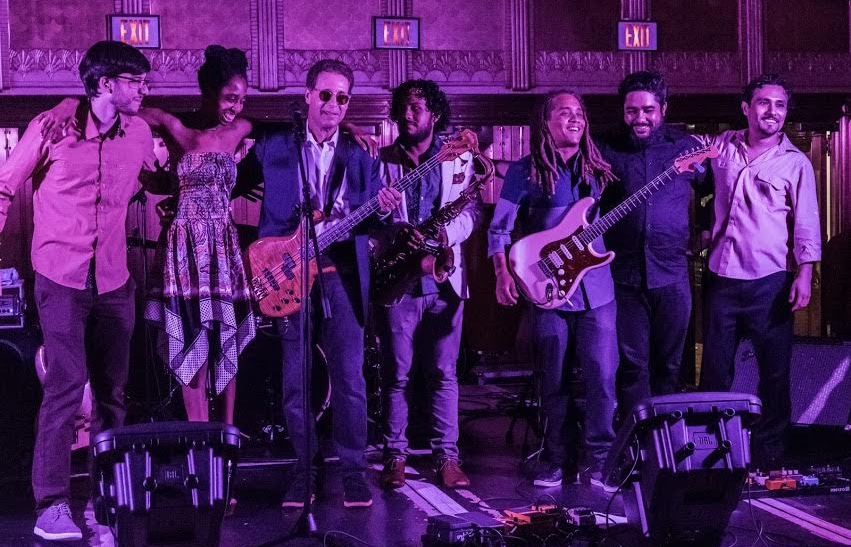 For electric bassist Robert Miller and Project Grand Slam, his jazz-rock band, it’s been an auspicious year. In releasing “Trippin,” their latest full-length album, he embarked on a readjusted sonic path, one that has brought him back to his rock and roll roots and garnered him and his septet some of the best reviews in his long career. The resulting buzz led to “Trippin’” (the album) being submitted to the Grammys for Album Of The Year, Jazz Vocal Album, Pop Vocal Album, Recording Package and Producer Of The Year, while “Trippin’” (the song) has been submitted for Instrumental Composition. The songs “Lament” and “You Started Something” have each been submitted for Grammys for Record Of The Year and Song Of The Year, and “Lament” as well for Pop Duo/Group Performance.

The veteran band leader explained, “It’s only the first step to getting Grammy but it is a step. This reaction will be used to bolster our Grammy hopes. Though I didn’t realize at the time, those positive reviews really started a ball rolling…”

In order to achieve such a response, he stocked the album with new tunes rich in vocals, some solid reboots of old classics, and various rock-ified improvisations. Plus he’s worked with a band he has known for several years, established the kind of tight bonds any great combo needs to have to make work

Besides bassist/composer Miller, his Trippin’ band includes Singer Ziarra Washington, percussionist Guillermo Barron Rios, drummer Joel E. Mateo, saxophonist Mario-Castro, and guitarist Tristan Clark. Said Miller, “I think that the band has blazed a totally unique path in today’s music, and I’m so pleased that our music has resonated with every audience that we’ve appeared before. Getting any Grammy nomination would be the icing on the cake for PGS!”

Miller’s Project Grand Slam has celebrated a Jazz Rock Fusion all along but really threw the spotlight on Washington’s singing. “Ziarra has really come into her and she really knows how to command the stage. I got such a great response to her performance that I started writing songs with her in mind.” He really believes that emphasis on both musicanship and live performance got them the Grammy nominations in several categories.

Their highly acclaimed 6th album was released in June 2018 and achieved the #1 spot on Billboard’s Contemporary Jazz chart in August, remaining in the Top 10 through September. This iteration of PGS not only released “Trippin,’” it headlined seven domestic and international music festivals including their first two in Europe. In fact, their performance at the Nisville Jazz Festival in Serbia led to a top flight live recording and compilation video from the performance which has already been viewed 100,000 times on YouTube in the short time since its release. “We were lucky that performance, was recordee and they provided us with a copy,” Miller remarked, “We thought it was so good, it’s going to be our next album.”

PGS also performed in 2018 at a number of the major performance venues in the U.S. including The Ridgefield Playhouse (CT), Mayo Performing Arts Center (NJ), Count Basie Theater (NJ), and the Paramount Hudson Valley (NY), and has shared the stage with such artists as Edgar Winter, Boney James, Blues Traveler, Mindi Abair, and YES.

Known for their dynamic shows and signature fusion, they also transformed re-imagined Classic Rock covers. A huge fan of these ‘60s and ‘70s benchmarks, Miller likes to do versions of some of the best-known songs with the added twist of using female vocalist Washington. This style has quickly become a fan favorite and a hallmark of PSG including covers of Jimi Hendrix’s “Fire”, The Kinks’ “You Really Got Me”, and Cream’s “I’m So Glad.” ’Trippin’’ continued this trend by including PGS’s uncharacteristic rendition of The Who’s iconic “I Can’t Explain”. This track is also up for Grammy consideration as Best Rock Performance. As Miller said, “Those live performances shine and anyone who gets to see us live will see what and why it works — we understand the past but we also project it into the future.”

Suzanna BowlingJanuary 29, 2023
Read More
Scroll for more
Tap
Melissa Errico Sings With So Little To be Sure Of
The Personal Property of Bernie Taupin Goes Up For Auction