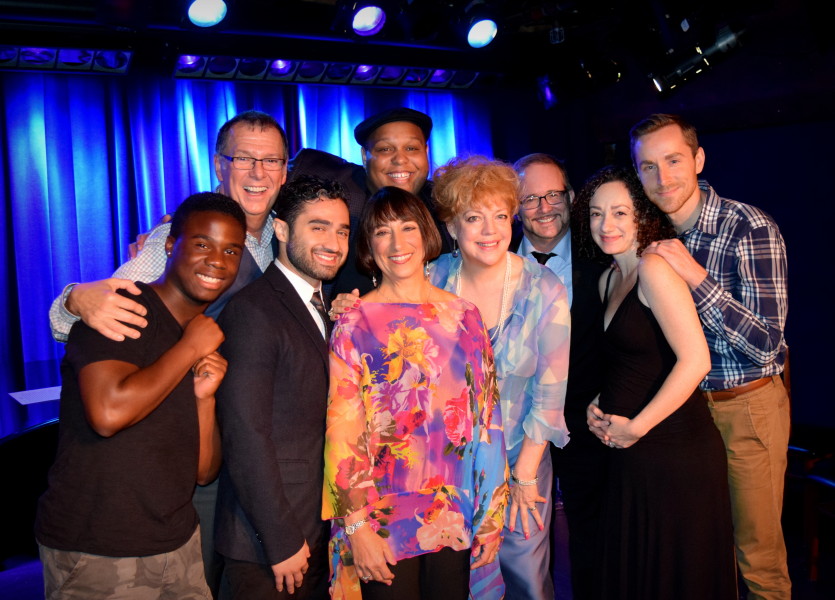 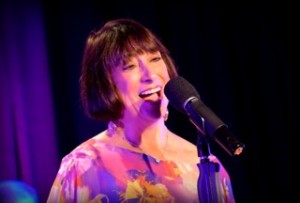 On Monday, September 19th at 7:00, The 8th Edition Of Robin’s Nest, a benefit to raise funds for the organization Help Us Adopt and hosted by Robin Westle, provided an evening of talent and generosity at the Laurie Beechman Theatre. The room was full of supporters of the organization waiting to be entertained by songs and stories delivered by an impressive and varied cast. What ensued was more than just entertainment. It was a memorable event, expertly crafted by director Eric Michael Gillett. 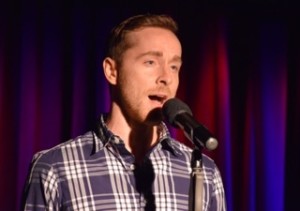 Westle opened the show with a warm rendition of Dick Gallagher and Mark Waldrop’s “Over the Top” and welcomed both veterans and newcomer “hatchlings” to Robins Nest. With considerable pride, Westle described the groundbreaking work of Help Us Adopt, which has raised $1,500,000 for adoption grants that have facilitated successful adoptions for more than 175 families. Westle and her husband Tom adopted and raised two children to adulthood, and their deep desire to help other families share that joy is both touching and inspiring. Westle said that she chose to move the show along by not offering raffles or prizes, and urged the audience members to further donate to www.helpusadopt.org if they were so moved. 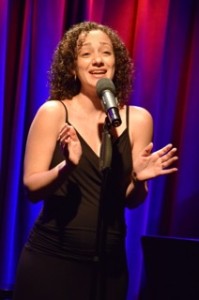 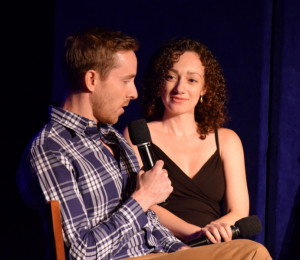 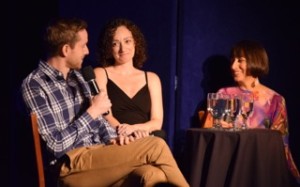 The show was indeed moving. Young Isaiah Feil-Sharp both sang and told his powerful story of living through foster care and finally being adopted at the age of fifteen (his dads were in the audience). The brightest moments of the evening included the compelling and sweet soprano of Broadway star Megan McGinnis (Side Show, Les Miserables, Little Women, Beauty and the Beast, to name a few). McGinnis delivered a stunning arrangement (by Tedd Firth) of Irving Berlin’s I love a Piano, with phrasing and tone one could listen to for hours. She was joined by her husband Adam Halpin, who presented a heart-wrenching performance of William Finn’s Anytime. Megan is due with their first child, a son, in January. When the two of them sang a complex arrangement of Over the Rainbow, the poignancy of new life, be it nurtured through biology or adoption, was powerful. 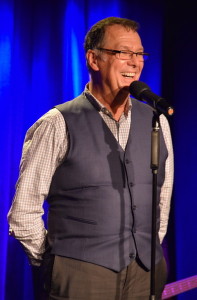 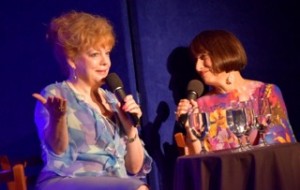 Director Eric Michael Gillett captivated the crowd with Dar William’s After All. Special guest artist KT Sullivan showed the full breadth of her skills in three completely different songs: Stephen Sondheim’s I Never Do Anything Twice, Jerome Kern’s My Husband’s First Wife and Kander and Ebb’s Colored Lights. Always a funny lady in compete control of her lyrics, Sullivan had the audience hooting and clapping with delight. She then threw us a curve and presented a raw performance of Colored Lights that left me breathless in its honesty. Eric Michael Gillett and KT Sullivan share a long history as friends, and call each other, “My oldest friend in show business.”  Both of them are living proof that talent (gotta have it) experience and very hard work are the recipe for consistently excellent performances. 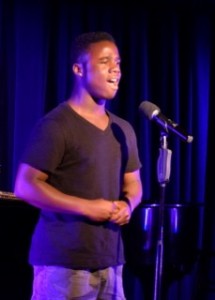 Robin Westle is a lovely host and an entertaining performer. Her excellent storytelling in Kander and Ebb’s Ring them Bells was as personal as it was hilarious, which is a winning formula for comedy in cabaret. I look forward to the 9th Edition of Robin’s Nest, to see what this mother/actress/ speech pathologist/wife/cabaret performer and magnanimous soul has up her sleeve next time! 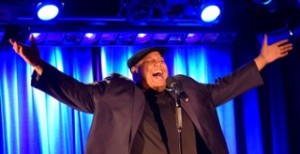 Carolyn was graduated from the Peabody Conservatory of Music, where she earned a degree in Opera Performance. Immediately after graduation she toured with a critically acclaimed jazz ensemble, Quick Step, sang for a season with the Tri-Cities Opera Company, and performed leading roles with regional theater companies including Ann, A Little Night Music, Maria, West Side Story, and The Leading Player, Pippin, to name a few. In between those gigs, she was a waitress. In search of a definitive genre for her performance career, Carolyn found her way to Provincetown, MA where the musical director who would change her life, the late Richard Weinstock, owned a restaurant and cabaret club, Rick's Provincetown. After hearing Carolyn sing a broad repertoire – classical to show tunes to jazz to original songs, Richard asked the question that made it all come clear: "Why not do it all, just be yourself, and call it Cabaret?" Carolyn spent the summer coaching and performing with Richard and sitting nightly in the audiences of cabaret greats like Sharon McKight, Jay Rogers and Ann Hampton Callaway – all with extended bookings at Rick's Provincetown. Finally knowing exactly what she wanted to do, Carolyn also chose exactly where she wanted to do it: New York City. Carolyn's first solo cabaret show in New York City garnered her the Outstanding Female Debut Award, from the Manhattan Association of Cabarets and Clubs (MAC) and was presented to her by Liza Minnelli. Shortly after, Carolyn won the Nightlife and BackStage Bistro Awards for Outstanding Female Vocalist. She graced the cover of Cabaret Scenes Magazine, won the Cabaret Hotline Top Ten CD Picks of the Year for her recording Reveille, won the Siegel's (then the Two of Clubs) CD Pick of the Month, presented to her by David Friedman. Carolyn has taken her shows, full of comedy and a wide-range of musical styles, to the Plush Room and Martunis in San Francisco, Davenports in Chicago, the Firebird and Feinsteins at the Regency in New York, and other cabaret venues from Seattle, WA to Rockland, ME. She is featured on the Original Cast Records Label in "The Johnny Mercer Jamborree." Her recent recording "Carolyn Montgomery-Forant Celebrates the Great American Songbook,” her award winning recording “Reveille," and her latest recording “Visible Phoenix” with Jon Weber and The Fine Whine, are available on Amazon.com and CD Baby. Carolyn is a featured singer on the recording that accompanies the popular children's book "Humpty Who?" by author Jennifer Griffin and available at www.basbleu.com or Bas Bleu at Amazon.com. In 2006, Carolyn took an hiatus from the stage to raise her son to school age, as well as open and operate her own restaurant, Cafe Forant, on the West Side of Manhattan. For seven years this hip and hopping little cafe (as well as a hip and hopping little boy, Eli) kept her beyond busy. During that time, she managed to squeeze in commercial voice-over work and the occasional cabaret guest appearance. Carolyn returned to the stage full time in January, 2014, producing and appearing in an all-star studded extravaganza at the Jerry Orbach Theater to benefit the Nightlife Awards (including Charles Busch, Julie Halston, Greg Edelman, Jane Monheit and Bill Irwin). In nine short months Carolyn has co-starred in the hit show Dirty Little Songs at 54 Below, been a featured performer at Town Hall in the Broadway by the Year Series, appeared at Lincoln Center with Steve Ross, starred in The Amanda McBroom Project at the Studio Theater (directed by Broadway's Arthur Masella, co-starring Mandy Gonzales, Lacretta Ross, Karen Akers and KT Sullivan) and taken her show Visible Phoenix to London, Chicago and San Francisco. In 2015, Montgomery-Forant garnered a rave review in the New York Times (see press) and presented Visible Phoenix at the Laurie Beechman Theatre in New York City for a full year, under the music direction of Jon Weber (NPR Piano Jazz). She has also conceived, with co-writer Jeff Cubeta, The Rise Tour, during which they will travel to 24 cities in 12 months presenting an original choral piece based on Maya Angelou’s poem Still I Rise with choruses throughout the United States, to raise money for the Mathew Shepard Foundation. The Rise Tour will premiere in Denver on December 3, 2015 and run through December 2016. Her series Stronger Stuff: see what happens when women help other women in a changing social and cultural age, will feature women artists of all varieties throughout 2016 in New York City. Thus far the series features Love Comes in Lavender, a benefit for LGBTQ Youth*, Dawn Derow in her classical Cabaret Legit at the Laurie Beechman Theatre* and Christmas Carolyn at Etcetera, Etcetera Restaurant*, featuring a number of talented women singers. Carolyn lives on the West Side of Manhattan with her family and is committed to an organic/slow food/eat locally lifestyle. She practices Bikram Yoga and travels with her family to ski, hike, paddle and explore the great outdoors as much as she can. For the last decade, she has served as the director of this country's only free veterinary clinic. Her blog, "Invisible Phoenix," is dedicated to the empowerment and inspiration of women over 40. Lest you assume Carolyn is just a simple Earth Mama in the habit of hugging trees, you should know she considers good wine a food group, plays poker with her child for high stakes, and (intelligently) looks to drag queens for make-up and fashion advice.