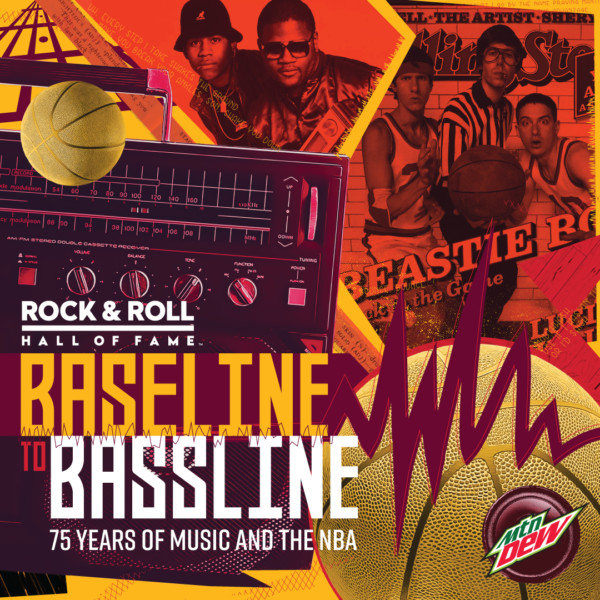 As Cleveland prepares for NBA All-Star Weekend, the Rock & Roll Hall of Fame is opening a new exhibition spotlighting the moments and movements that have kept fans engaged with their favorite teams and artists. The new exhibition Baseline to Bassline: 75 Years of Music and the NBA, sponsored by Mountain Dew, runs from February 17 through April 1.

“This timely exhibition illustrates the crossover between music and basketball and how, together, they have impacted the global cultural landscape,” said Greg Harris, President & CEO, Rock & Roll Hall of Fame. “We welcome fans from around the country to Cleveland to celebrate their teams, the players, and the power of rock & roll during NBA All-Star Weekend and beyond.”

The experience begins with a look at the cultural impact of the sport. It takes fans back to music and language pioneer Cab Calloway as you explore his “Hepster’s Dictionary” and zoot suit worn in Janet Jackson’s “Alright” video, spotlighting hip-hop’s origins and the beginning of basketball as entertainment with the Harlem Globetrotters.

Artifacts worn or used by players and artists at NBA events and promos are on display, such as will.i.am’s outfit from the Black Eyed Peas’ 2004 NBA All-Star Game “Let’s Get It Started” promo. You can also get up close with artists’ bling and get a glimpse into the sneaker culture’s longstanding relationship with the music scene with Air Jordans worn by Chuck D and a pair worn by Kelis in her “Milkshake” video.

Then, get pumped for All-Star Weekend as you explore songs that capture the essence and attitude of the NBA and provide the energy of being in the stand at a game, including songs by Inductees with current and former NBA players. You can scan QR codes in the exhibit to take the music with you via Spotify.

The exhibition also nods to the Rock Hall’s It’s Be Said All Along: Voices of Rage, Hope & Empowerment exhibit, highlighting how musicians, basketball players, and the industry have responded to social injustice, using their voices and actions to influence and inspire the nation.

Fans can up their swagger with a great selection of music and basketball apparel available through Rock Hall’s online or in-person store. Click here to shop now.

Rock Connects Us. Our mission is clear: To engage, teach and inspire through the power of rock & roll. We share stories of the people, events, and songs that shape our world through digital content, innovative exhibits, live music, and engaging programs. At the Rock Hall, we are dedicated to making a difference. We intentionally foster a diverse and equitable Museum that encourages and embraces creativity and innovation. As a community leader, we value, empower, and respect all people. Diversity, Equity, & Inclusion is more than just a policy. It supports our mission and defines our future. Join the millions who love it as much as you do. Experience us live or online – Visit rockhall.com or follow the Rock Hall on Facebook (@rockandrollhalloffame), Twitter (@rockhall), Instagram (@rockhall), and YouTube (youtube.com/rockhall). Long Live Rock!