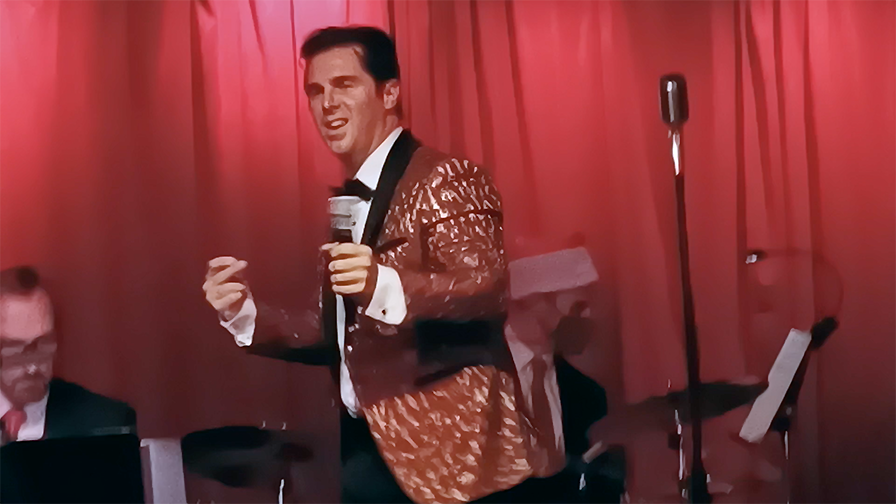 Ah, Christmas in New York. Roasting chestnuts, the Rockettes, and of course… Rockabilly? Well, this year, one of my favorite night spots, Swing 46, which is generally known for its outstanding big band performers and swing dancing, is expanding its musical horizons for the holidays. They are hosting The Original Rockabilly Christmas featuring Shea Arender, in cooperation with The Girl Behind the Curtain Productions and Mr. Arender himself.

Rockabilly combined western musical styles such as country with rhythm and blues in a musical collision that exploded in the 1950’s into classic rock and roll, as represented by such artists as Carl Perkins, Johnny Cash, Jerry Lee Lewis, and Elvis Presley, among others. A lot of that cross-fertilization happened in the recording studios of Sun Records in Memphis. If you’ve seen the musical, “Million Dollar Quartet,” in which all four of the above are brought together for an imagined performance together there, you get the picture.

This holiday show, created by Mr. Arender, is both a musical tribute and a Christmas present in honor of those performers and that style. He is a performer, producer, songwriter, and entrepreneur, who comes from Louisiana via Las Vegas, where he is the Executive Director of the Las Vegas Symphony Orchestra.  He is also the Executive Producer of Harold Arlen’s Broadway Estate Musical, The Wonderful Wizard of Song, and a collector of vintage items from the Rockabilly era, including the original 1957 Pink Cadillac previously owned by Elvis himself.

Mr. Arender is a dark haired, handsome  “lady killer” with a warm baritone and a natural Southern accent that can’t help but invite comparison to that of “The King”, especially when he is decked out in a sparkly, 50’s style tuxedo coat. Although only three of the songs in his set were Elvis tunes specifically, every time he sang, the girls in the audience swooned accordingly. Songs like “that’s Alright Mama” and “Blue Suede Shoes” are interwoven with traditional Christmas favorites, Rockabilly style.

He shares the stage with two talented  female backup singers, Sarah Hayes and Jade Litaker, who occasionally step into the spotlight on their own and shine brightly.

Ms. Hayes swings between lively on “You Ain’t Nothin’ But a Raindeer,” and sultry, melting the icicles of the gentlemen in the crowd with “Santa Baby.”  With a clean, lovely sound evoking Ella Fitzgerald, the sweet-voiced Ms. Litaker gives us “I’ve Got My Love to Keep Me Warm” and the lesser known, “Santa, Is That You?”

If I were to pick any nits here, I’d like to see more interaction between the female singers and Mr. Arender.  As his back up singers, they often looked like they needed something more to do. A bit of rehearsed choreography would also give the show some much-needed physical unity.

Musical Director and pianist, Rob Cookman, captures the Jerry Lee Lewis style very well, although he doesn’t attempt to bring any of “The Killer’s” physical antics to the piano. The rest of the capable band included Andrew Whitbeck on bass, Jack Morer on rockin’ guitar, Dan Weiner poundin’ the drums, Kerry Mackillop tootin’ the trumpet, Ben Golder-Novick yakkety-yakkin’ the  sax, and David Gibson blowin’ the trombone.

The intimacy of Swing 46 lends itself well to a show like this, which is as much  a musical party as a performance.  Singing along is frequently encouraged, and the performers occasionally either go into the audience, or bring someone up to sing with. Getting up and dancing is also encouraged during the show, as if anybody’s feet could really resist!

So put on your Blue Suede Shoes and get down to Swing 46 at 349 West 46th Street on a Friday or Saturday nights and Sunday Brunch from now through the holidays at least.

Suzanna BowlingAugust 6, 2022
Read More
Scroll for more
Tap
Cheek To Cheek: Irving Berlin In Hollywood at the York Theatre is Musical History, Tap and Songs That You Leave Humming
How to Take Care of Your Metal Roof to Extend Its Lifespan?