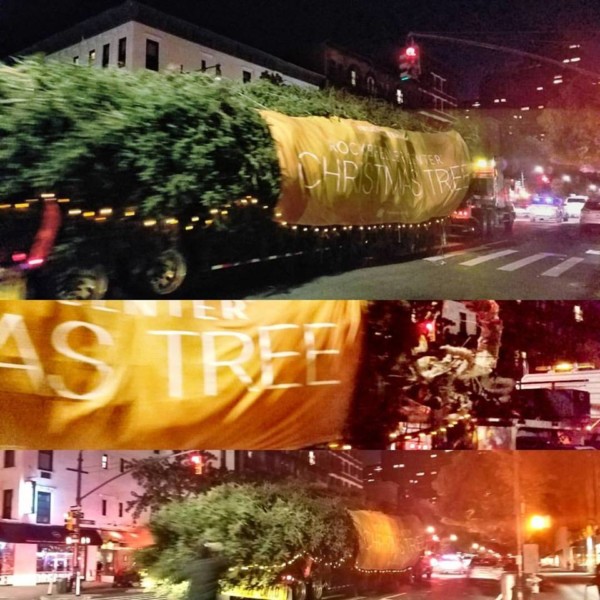 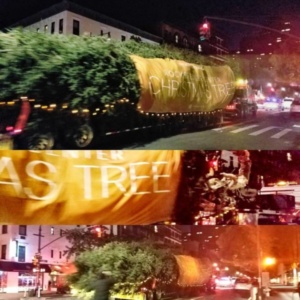 It Isn’t even Thanksgiving, but the Rockefeller Center Christmas Tree rolled into town last night.  The gorgeous Norway Spruce is 75 feet tall and weighs between 12 and 13 tons. The tree was cut down Thursday in Pennsylvania. Starting today the tree will be lit with five miles-worth of LED lights (that’s 45,000 to be exact) and a 9.5-foot Swarovski star decked out in 25,000 crystals with one million facets.

The Rockefeller Center’s head gardener Erik Pauze has been eyeing this year’s 80 year-old Spruce since 2010, waiting for it to be the perfect height to take center stage.

For over seven decades, the Christmas Tree at Rockefeller Center and the holiday decorations adorning and surrounding have stood as a holiday beacon for New Yorkers and visitors alike. From the beginning, the Tree was a gathering place and reflection of what was happening in the world around it. Even before the first formal tree went up, workers lined up beneath a Christmas tree on the Rockefeller Plaza construction site to collect their paychecks during the height of the Great Depression. People from around the world came after September 11th to see the Tree decorated in a patriotic red, white and blue. Today, more than half a million people pass by the Tree every day, making Rockefeller Center the epicenter of New York City’s holiday celebrations.

The tree then gives it’s life a second time as it is donated Habitat for Humanity to be used as lumber.