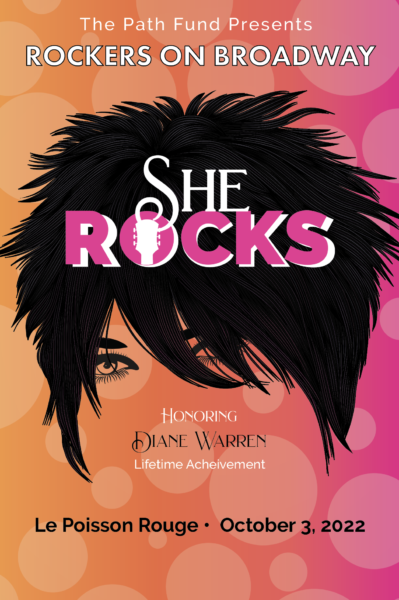 Rockers on Broadway: She Rocks  will be presented by The PATH Fund, Inc® on Monday, October 3, 2022, at Le Poisson Rouge. Rockers on Broadway has long been known for pairing great Broadway performers with great Rock ‘n’ Roll – all for a great cause.

This will be their 29th edition.

Some of the best Rock ‘n’ Roll, of all time, has been written and produced by WOMEN!

Women ROCK because they just do!  It’s time they get the attention they deserve as talented trailblazers shaping today’s music industry. Rockers On Broadway: SHE ROCKS, is honoring the legendary songwriter Diane Warren, and also highlights the many women in Rock ‘n’ Roll who have successfully made the crossover to the Broadway stage.

“We are thrilled to be bringing Rockers On Broadway back in front of a live audience – lets Rock!” says creator Donnie Kehr, “And we are ecstatic to be honoring the incomparable Diane Warren” added Cori Gardner the events Executive Producer.

Ari Groover (Tina, Head Over Heels, Holler If Ya Hear Me)

Tamika Lawrence (Caroline Or Change, Getting The Band Back Together, Come From Away)

Ryann Redmond (Frozen, Escape To Margaritaville, If/Then, Bring It On The Musical )

Each year  Rockers on Broadway® honors an industry luminary who has inspired and enhanced the community. Supporting this recognition of groundbreaking women in music, Rockers on Broadway: She Rocks  will honor the legendary songwriter Diane Warren with the 2022 Rockers On Broadway Lifetime Achievement Award.

Diane Warren is one of modern music’s most celebrated songwriters; she has penned nine #1 and 32 top 10 hits on the Billboard Hot 100; is tied for having written the most #1 songs as a sole writer in Billboard history and was inducted into the Songwriters Hall of Fame in 2001.

She has received 13 Academy Award nominations, is a Grammy winner with 15 nominations, Emmy winner and two-time Golden Globe award winner whose songs have been featured in more than 100 motion pictures.

She is the sole owner of her publishing company Realsongs – the most successful female-owned and operated business in the music industry.  She is also the recipient of a star on the Hollywood Walk of Fame.

The PATH Fund, Inc.® is a non-profit organization dedicated to supporting pre-professional performing arts training with scholarships and program funding. Additionally, we support NYC’s thriving Broadway, drama and music communities by working with new performers and aspiring writers to develop talent and new works of theater and music.

PATH stands for Performing Artists That Help! We are a community of artists, writers, musicians, designers, crew, producers, directors and fans coming together as one, promoting a good cause, sharing in a common goal and having a BLAST while doing it!

Proceeds from Rockers on Broadway: She Rocks will benefit The PATH Fund, Inc.®, BCEFA and their support for The Phyllis Newman Women’s Health Initiative and arts education programs with Broadway Bound Kids and The Felix Organization.

Covid: Must be vaccinated. Masks suggested