Rocktopia Loses Its Own Revolution

Rocktopia Loses Its Own Revolution 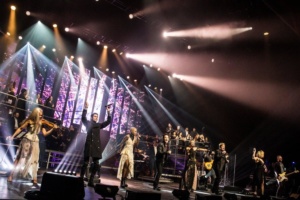 Less than five minutes into Rocktopia, there wasn’t enough aspirin in the house to save what was to be a painful and head-splitting afternoon. The sound design by Nick Kourtides was off the decimal charts. The projections design by Michael Stiller and Austin Switser looked like random screen savers and did not connect to the material in one iota or tell a story. The lighting design, which isn’t even credited, was almost blinding. The singers Rob Evan, Chloe Lowery, Tony Vincent (Broadway’s American Idiot and Jesus Christ Superstar), Kimberly Nichole and Alyson Cambridge all seemed more intent on power than emotional context. There wasn’t one moment where the singer and the song became one. For those of us who have perfect pitch, there were some sharp and flat notes that were like fingernails on a chalkboard. It felt like the show “Glee” performing live 30 years later. The rock songs in Rocktopia were all done on that show. 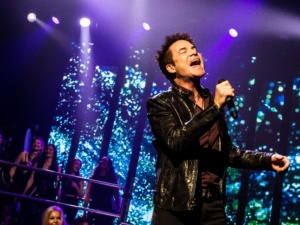 Train frontman Pat Monahan was given the songs “Stairway to Heaven” and “Kashmir,” and “Drops of Jupiter”. Though the man has stage presence, it seems as if this was a throwaway performance with zero energy. 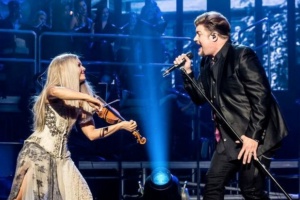 The show started with Sprach Zarathustra (2001: A Space Odyssey) moving into the Who’s “Baba O’Riley” which morphed into Mozart’s “Eine Kleine Nachtmusik” with Styx’s “Come Sail Away”. The biggest problem with Rocktopia is the arrangements by Randall Craig Fleischer, which are unimpressive and for the most part, off base. Styx’s “Come Sail Away” is one of my favorite songs, but the rhythm and notes that were sung had me scratching my head in wonder. His best attempts were with “Musetta’s Waltz” from Puccini’s La Boheme leading into the Beatles “Something”. You also had Stravinsky’s “The Rite of Spring” melding into Jimi Hendrix’s “Purple Haze”. The set list sometimes also seems unimaginative with Beethoven’s “Ode to Joy”, Journey’s “Don’t Stop Believin'” and the oddest choice of the night, John Williams Schindler’s List, into Samuel Barber’s “Adagio for Strings”, to  Queen’s “Who Wants to Live Forever”, into “We Are the Champions”, as Anne Frank, Princess Diana, Van Gough’s “Ear Painting”, Mother Theresa are flashed on the projection screen. Also on the set list were Berlioz’s “Symphonie fantastique” with Aerosmith’s “Dream On” and Puccini’s “Nessun Dorma”. 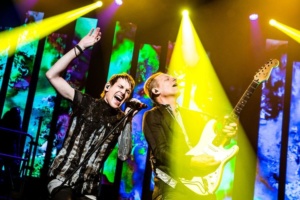 The musicians are at the heart of this piece. Celtic violinist Mairead Nesbitt, if she would stop the insane amount of head rolls, was outstanding. I also loved Tony Bruno on guitar, who brought the essence of rock to the stage and Henry Aronson on piano, who was simply a thrill to listen to. The New York Contemporary Symphony Orchestra was also on the top of their game, but the New York Contemporary Choir had some voices that again, could not hold the correct notes. The show’s producers initially refused to pay the choir members the minimum Broadway rate, but they eventually caved. It seems as if the producers were trying to save money on every side as The New York Contemporary Choir looked as if they shopped at H&M and the lead singers wore the same corseted lace outfits throughout the whole two and a half hour show.

This concert production, created by Rob Evan and Randall Craig Fleischer, has enjoyed some touring success and the company’s Live in Budapest video has become a PBS staple.