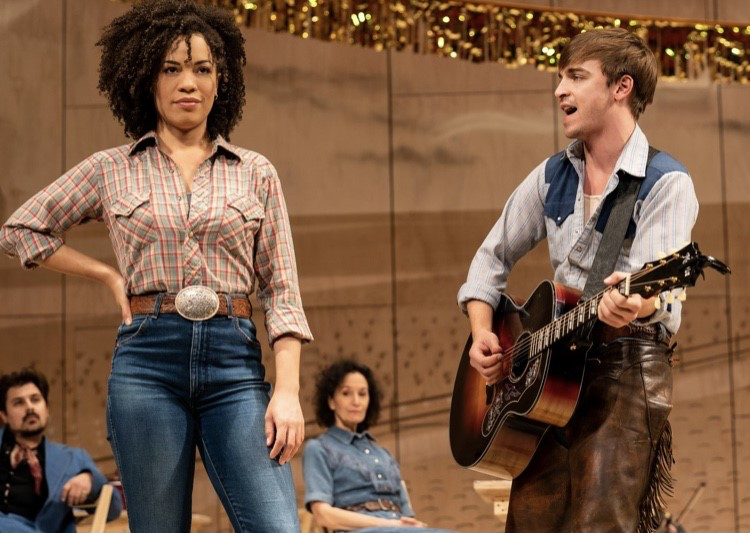 For those expecting a bright and shiny rendition of a Broadway classic, be forewarned, this is not that. Not by a longshot. Director Daniel Fish’ reimagined Rodgers & Hammerstein’s Oklahoma! national tour has landed at the CIBC Theatre just in time to shock and stupefy unexpecting audiences into stunned bewilderment. This new anxiety-ridden interpretation, looking at a 75-year-old classic piece of Americana through a very different lens, intentionally severed any chords of feel-good nostalgia. Keeping the original text in place, this version placed sex and explicit violence front and center, this western leaning into the rooting tooting gun violence that currently plagues not only the Windy City, but the culture as a whole. Clearly this adaptation connected with New York audiences, as it won two Tony Awards, including Best Revival of a Musical in a pre-pandemic 2019, however seven decades after the original debuted, this Oklahoma has little in common with past iterations.  Let’s start with what the play has done right. Daniel Kluger’s scaled down orchestrations and Andy Collopy music direction helped the lyrics of these songs connect with an audience in an intimate way that the bigger, splashier renditions never did. As the central character, farm woman, Laurey Williams (Hamilton’s Sasha Hutchings) is a stunner with a powerful set of pipes. All eyes are on her every time she is on the stage. Tony Award-winner, Barbara Walsh, brought sass and bravado to her Aunt Eller. Everyone is in fine voice, Sean Grandillo’s  Curly McLain’s “Oh What a Beautiful Mornin” is worth the price of admission alone. The same could be said of “The Surry with the Fringe on Top” a whimsical and imaginative tune that fit just as perfectly as Aladdin’s “A Whole New World,” a comparison I’ve never previously connected in my head. While making comparisons, this Oklahoma often felt like the cast of Broadway’s revolutionary RENT putting their own “downtown” spin on this Broadway classic. This is the tightest and most diverse cast I have ever seen performing this material, jettisoning large dance numbers for just a staging of eight to ten. It worked, at least in act one.

Now the stuff they got wrong. Act two was a complete teardown of the original material. It began with a contemporary dance number credited to Lead Dancer (Gabrielle Hamilton) who wore a simple, yet not period specific, sequin top with the logo “Dream Baby Dream” emblazoned on the front. Only after Hutchen’s appeared on stage next to Hamilton did I fully understand this was the visual manifestation of a panicked bridal fever dream. For as much flack as Mamma Mia the Musical received on Broadway when it opened, its act two dream sequence “Under Attack” made a great deal more visual and narrative sense. Taking nothing away from Hamilton’s bold movements, this vignette played like a “So You Think You Can Dance” audition piece, the boldest piece of John Heginbotham choreography throughout the entire show.  Also off-putting, the love triangle between Hutchings’ Williams, Curly McLain (Sean Grandillo) and Jud Fry (Christopher Bannow). If Curly was the squeaky clean, romantic lead on paper, the character became very messy and problematic here. Bannow’s Fry was an unsettling, almost stalker like character in the first act, but after his murder in act two, Hutchings’ Laurey is broken by this moment, and never recovered. She was standing in her wedding gown, covered in the blood spattering of her aforementioned murdered employee, and I was just as shattered as she, watching this unfold on the stage.

Then there was the trial, clearly an allegory for today’s criminal justice system. The judge purposely leading the witness, Curly, into saying just enough to clear himself of the cold-blooded murder he just committed. Intentionally amending his testimony so there was no option but to return a not-guilty verdict. Poor Laurey, now saddled with a murderer as her betrothed. By the time the company finally got around to singing the act two rendition of the title track, it was performed with such a trauma inducing, frenetic energy, it was like watching a rabid dog devouring a severed bone. Warm and fuzzy this show is not.

As far as the remaining creative team, Laura Jellinek’s scenic design was simplicity at its finest. The stage peppered with rows of picnic tables, beer cans and firearms, totally socially acceptable back in the wild west. Terese Wadden’s costuming was functional, with denim and fringe aiding lead characters’ personifications. Scott Zielinski lighting and Drew Levy sound design worked in succinct fortitude as there were numerous moments the stage went completely black, characters speaking their lines in a hauntingly purposeful, whispered monotone.
Daniel Fish’s Rodgers & Hammerstein’s Oklahoma! is a stark contrast to previously produced versions of the same material. Dark, foreboding, political and prickly, this isn’t for everybody. After two years of lock-down, this was an off-putting theatrical outing which created more anxiety than it ever alleviated. Well sung but purposely disturbing and violent, this Oklahoma is far from okay.

Rodgers & Hammerstein’s Oklahoma! is now playing at the CIBC Theatre through January 23, 2022

Suzanna BowlingMay 6, 2022
Read More
Scroll for more
Tap
The Black and White Tragedy of Macbeth in a Brilliant Stark Construct
A Mixed Production at Arden’s A Streetcar Named Desire