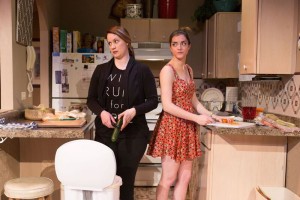 Jackalope Theatre Company’s latest, the world premiere new play Rolling is a complicated yet pointed tale, blending questionable journalistic ethics with problematical familial dynamics. Playwright Calamity West’s derisive, cutting yet hysterical script cleverly blends the murky journalistic ethics of the film Shattered Glass with the estrogen soaked forked tongues of Steel Magnolias. Borrowing a page from real life for her inspiration, this story attempted to lift the veil of Rolling Stone Magazine writer Sabrina Rubin Erdely and her November 2014 article “A Rape On Campus” which was later proven to be manufactured and without merit. As lawsuits were filed, Erdely went into hiding, even going so far as to deactivate her Twitter account, which got West speculating about the journalist. Where did she go during the harsh media fallout? Why did she disappear? Turning her inquisitive nature into an engrossing, two plus hour production, West’s abstract has become the just opened, must-see, new production, Rolling. With the aid of director Nate Silver and a talented quartet of actors, this witty, layered, demanding and engaging new piece was born. 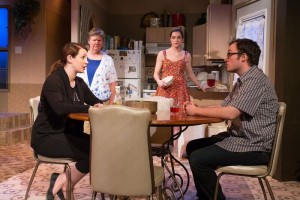 Our story begins as prickly female protagonist, Valerie (Dana Black) returns home in hiding. She was once a distinguished author, renowned for scribing a groundbreaking story about sexual assault, but is now on the lam, due to the relentless spotlight of the media’s harsh glare in her most desperate hour of need. This subsequent fallout, including  threats against her own life and safety, are a result of her story being a possible fraud. Escaping the limelight, she elected to return to the “protection” of her small-town childhood home. Unfortunately for Valerie, the scrutiny at home is just as relentless.  To call Valerie’s relationship with her overbearing mother, Janet (Ann James) complicated would be an understatement. The women clash almost instantly. I wondered, could Val not have booked herself a south of the border vacation retreat to escape instead? The whip smart, rapid-fire verbal fireworks between these two aptly cast ladies was unrelenting. Complicating matters further, Val’s sister, Molly (Abigail Pierce) and outwardly sweet, but actually quite angry, vindictive, narcissistic, and sometimes recovering alcoholic, is not far from the action. She may be directionless and can’t keep a job, but her contempt for her sister and her sister’s profession are evident from the get go. This trio of complicated, flawed, smart, and confident women prove their best when displaying their worst. No one can hurt you like family, and the hurt here is oh so good. 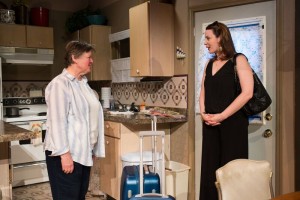 Rounding out the cast, neighbor Danny (Pat Whalen) an underachieving English Professor with a secret agenda. He may view Valerie’s professional descent as his own attempt to grab his own literary brass ring. As the play continues, it time shifts between acts, capturing the curious teeter-totter like aspects of the characters lives. When Valerie is up, her sister is down, falling off the sobriety bandwagon. When Molly is outwardly “together” with her life, Valerie is a complete mess. Both dodging, sometimes successfully, sometimes not, the intellectual misogyny of their domineering mother. I found this shooting duck gallery of familial dysfunction highly entertaining. The characters rely on one another in the most unhealthy of ways, which was both delicious and combative to watch. The highly competitive nature of the three women is what made Rolling so absorbing. The urgency of West’s writing style and story telling format pace is best engaged live in the audience. 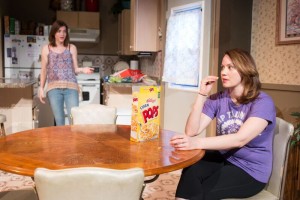 “Where can you run when you’re not welcome at home?” is the question at the heart of this fetching, second show of Jackalope Theatre Company’s eight season.  Calamity West’s volatile script, explosive performances from the talented troika of leading ladies, seriously, you cannot take your eyes off Black as she deteriorates from dynamic urbanite to suburban slacker. Hanna Wisner’s fantastic costume design helps with that physical transformation too. Joanna Iwanicka’s incredibly detailed scenic design will impress for this venue as will the evocative lighting design from Cat Wilson. While Rolling poses many more questions than it attempts to answer, I found myself thoroughly engaged in the journey. The ending hopeful as characters extended life rafts to one another. These “Princesses” riding up to their own rescues on their own, not-so-white, horses. 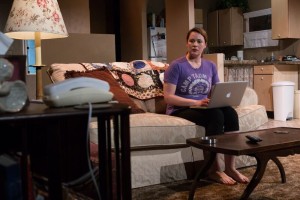