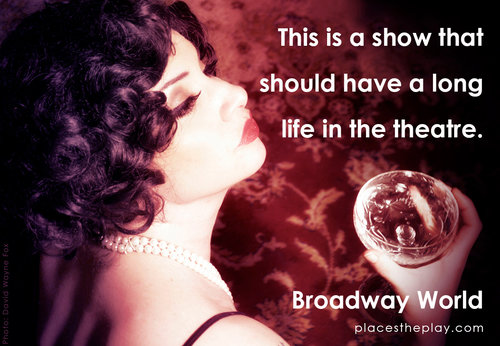 You may have walked down West 39th Street between 7th and 8th, in bustling Midtown dozens of times, never realizing that one of New York’s most visionary stars shone in a Broadway theatre there that the Shubert’s built for and named after her – The Nazimova Theatre – unheard of for a gay, Jewish immigrant in the early 1900’s, and for a woman at any time. Now the theatre is gone, and along with it the memory of Alla Nazimova. Her bold, trailblazing artistic legacy is unprecedented, unrepeated and under the radar. Her iconoclastic story of freedom and nonconformity, silenced under the smoldering rubble of forgotten history.

Alla Nazimova was the greatest star you’ve never heard of, one of the brightest lights on America’s stage and cinema screen, actor, director and writer. Few women, or men, rose to such great heights. She fled from Tsarist Russia and an abusive father, to the Lower East Side.

Romy Nordlinger co-stars on Bull (CBS). She can be seen in Florence Foster Jenkins, Monster Hunt, Law & Order CI (Officer Talbor), All My Children, One Life To Live and has appeared in scores of off and off-off Broadway and regional productions. Romy is a well known audiobook narrator, she can be heard in over 200 audiobooks and counting!

She is also a Member of The League Of Professional Theatre Women. Member of NY Madness, Resonance Theatre Ensemble, Flux Sundays and The Playwrights Gallery.

After a sold-out run at 59E59, Romy Nordlinger’s portrayal of Nazimova in Places, inspired by Nazimova’s own words, Nazimova returns from the grave, raising her voice to share her journey as a trailblazer who loved America “as only an immigrant can.” Her story shows us we can make beautiful things in dark times, and holds a light to lead the way in celebration of diversity with the knowledge that our differences make us beautiful and our struggles can be overcome.

T2c had a chance to talk to Ms. Nordlinger and learn much more.

T2C: You are a writer and an actress, how did you get here?

Romy Nordlinger: I started writing because I wasn’t finding the parts that were expressing all that I felt I was capable of expressing. I wanted to talk about things that mattered to me. As I got older, I realized I had things I wanted to say and I had an identity. I was an artist as well as an actress. What drew me to acting, was my interest in the human condition. There is far more to say, than the kinds of parts I was being offered and for the growth in myself as well. The need to express far more exceeded, the need for attention.

T2C: You seem to take on historic characters. What draws you to them?

Romy Nordlinger: I believe that we are all a microcosm that has proceeded us. We are also the stories we tell. I am very passionate. I started to realize that the history that was being told, was through a particular lens, mostly a patriarchal white male lens. There were important stories that were being omitted from the history books.

T2C: Who was Alla Nazimova?

T2C: How did you find out about her?

Romy Nordlinger: Mari Lyn Henry, is a theatre historian. She is brilliant and she has helped me immensely. She founded The Society for the Preservation of Theatrical History. She was putting together a collection of monologues and she mentioned a few unknown actress. When I heard about Alla Nazimova, I was drawn to who she is. She was so resourceful and remarkable. A rags to riches story, one of the first female producer/ directors in Hollywood and she produced her own Broadway show.

T2C: She was also gay. What boundaries did she face.

Romy Nordlinger: She didn’t identify herself as gay, bi or straight. Unapologetic about her bisexual decadence, she defied the moral and artistic codes of her time that eventually forced her into obscurity. Her legendary Garden of Alla, at 88 Sunset Blvd, was a haven of intellectual and sexual freedom with regulars such as F. Scott Fitzgerald, Hemmingway, Garbo, Dietrich, Valentino, Chaplin, Rachmaninov – basically anybody who was anybody. There she declared her all women’s “sewing circle” in open defiance, proclaiming her strength when women were relegated to silence. This term became a LGBTQ phrase to identify anyone was out of the closet. It was where the hedonistic had liberty. She lost the Garden of Allah when her production company under another name had several box office flops including what is now a cult favorite “Salome”. Salomewas too “Wilde” for 1926. The Hollywood elite conspired against her, because she was a woman. The press and the studios destroyed her.

T2C: Do you think we still face the same prejudices that Alla did?

Romy Nordlinger: Absolutely. It is much more insidious, There is a glass ceiling, unspoken rules and prescriptions on what is male and what is female.

T2C: Do you think this can ever change?

Romy Nordlinger: I do how. If we inherit herstory our collective story. We need to look back at these heroines who have paved the way.

T2C: What would you like audiences to take away from Places?

Romy Nordlinger: I would like them to take away the feeling and knowledge that it is not success that defines you. That our  propensity is to find joy and meaning from our lives. Everyone’s story is important. We all have our own stories to tell.

Romy Nordlinger: In a way, more diversity, but also that gay and lesbian heroes are being lost. It is also important for a young person to realize others have fought hard battles and won.

T2C: What other roles and shows would you like to take on?

Romy Nordlinger: I would love to play to play Martha in Whose Afraid of Virginia Wolfe, Blanche…. I love Tennessee Williams.

T2C: What would you like us to know about Romy?

Romy Nordlinger: To me compassion is the most important thing in a human being, as is gratitude as well as staying in the moment.