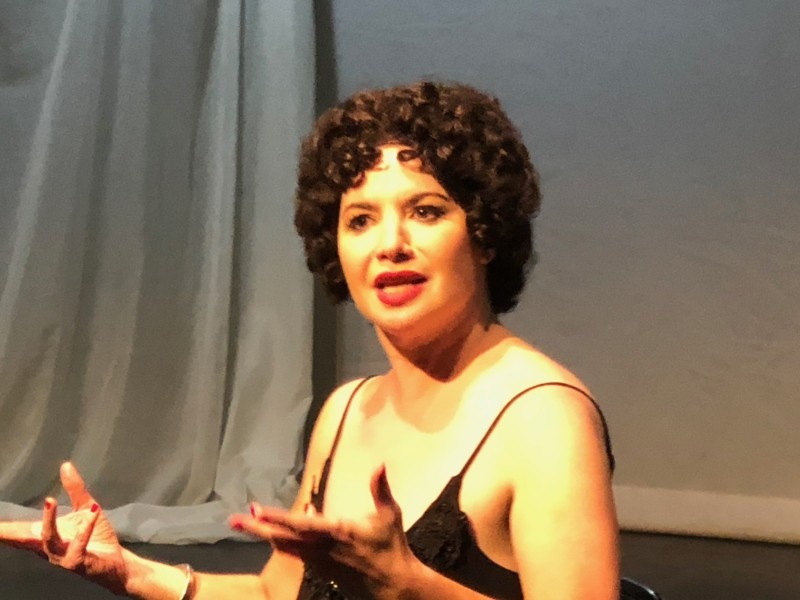 Romy Nordlinger channels Alla Nazimova, the stage and silent movie star in Places at the Here Arts Center, 145 6th Ave. This drama biography is part of the Summer SubletSeries: Co-Op. Produced by Pat Addiss, Places has included 3 talk backs. The first was tonight with Karynne Summars of Hedonist Magazine. The second will occur with Trav SD – Vaudeville historian and Nazimova expert on Wednesday, June 12th and the third with Richard Ridge of Broadway World on Thursday June 13th.

Alla Nazimova was delated from history due to her sexuality, her power and her choices. She made it in a man’s world, until they decided she had reached too far and then destroyed and had her erased.

The set is black and white film clips from Nazimova’s career and then later of women who have followed in her steps thanks to the graphics and video design of Adam Burns. It also included David Wayne Fox’s photography, which adds Ms. Nordlinger into this framework.

Ms.Nordlinger dramatically enters in a slinky black flapper dress and pearls. She speaks to us with Russian inflections, as she discribes her brutal upbringing. She only escapes playing a virtuoso violin and studying acting with Stanislavski. Achieving stardom in Moscow, she tours Europe and arrived in New York City in 1905. She establishes herself as a Broadway star in her 1906 performance in the title role of Hedda Gabler. She is 27.

In 1916, she began making silent movies and became a rival to Mary Pickford and became the highest paid movie star. She became the first women producer and director, who also wrote and starred in her own pictures. A free-spirited, bisexual, Nazimova, started The Garden of Allah, a hotel comprised of bungalows, where F. Scott Fitzgerald, Cole Porter, Ernest Hemingway, Tallulah Bankhead, Dorothy Parker and others were free to be themselves as they embraced a hedonistic lifestyle.

Hollywood hated her for that and an adaptation of Oscar Wilde’s Salome, saw her ruined, as the press crucified what now is considered a masterpiece of the silent film era. She returned to the New York stage, but died in 1945 at the age of 66 in Los Angeles. Nancy Reagan’s mother was a close friend, and Nazimova was Reagan’s godmother.

Nazimova was ahead of her time fighting the things that women are still fighting for today.

Places is relevant for now and is perfect for LGBTQ month. We can not be put in closets or be punished for our talent due to our sexual preferences. Romy Nordlinger shows us the life, energy and drive behind this woman who paved the way for so many others.