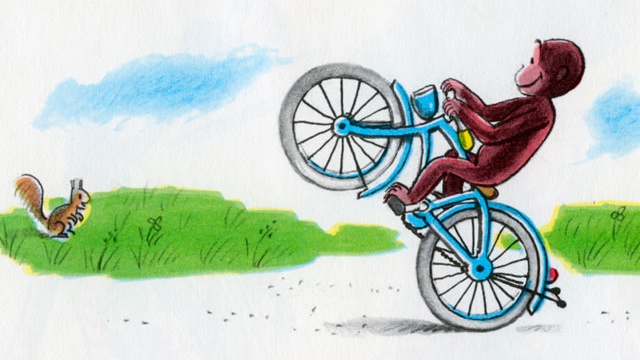 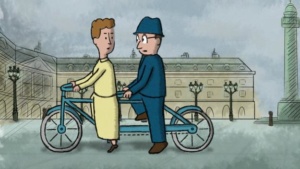 On an early August evening, Rooftop Films blessing us all with a very special screening of Monkey Business: The Adventures of Curious George’s Creatorson the roof of the JCC in Manhattan. Who knew that what we would be witnessing would be as spectacular and far more moving than the gorgeous night that we were blessed with. 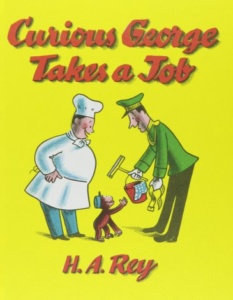 I didn’t really know much about Hans and Margaret Rey, the authors of the Curious George books. The books had played a large and memorable role in my childhood and helped create my spirit of adventure and curiosity in the world around me. But I had no clue that their story would be as dramatic and inspiring in both the worlds of worldly adventure and in love and devotion.  Both creators grew up in Germany in the same social and economic circle not very far apart from one another. Hans knew Margaret’s sister, Mary, and found himself one evening at the familial home to celebrate Mary’s 16th birthday. Margaret was introduced to the man who would end up becoming her husband and life partner when she slid down the railing of the staircase and landing at the feet of a startled Hans. A totally charming ‘meet-cute’ if there ever was one, and in filmmaker Ema Ryan Yamazaki’s beautifully crafted documentary, this is just the beginning of a dramatic and dynamic story spanning decades and exciting travels. It is loving told with such care to detail utilizing and encompassing both Curious George‘s stories, insights into these two brave souls, and details of their miraculous journey through the dangerous world they existed in. 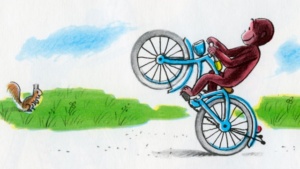 It is a much more fascinating story than one can image. Their life journey spans two World Wars, three continents, and four countries.  They forged an escape from Paris on home-made bikes as the Nazis were descending on France. It’s a story that feels like it could be lifted straight out of a romantic war movie and probably should be made into one (hint hint). Hidden in with their few belongings stuffed in bike baskets, were the manuscript for the first book that starred that curious monkey.  Tears weld up at one point when the filmmaker describes the kindness and help that came from rural French strangers to these heavily accented German Jews on their journey out of France.  It’s a crazy compelling story and makes one wonder about the luck and driving spirit of these two. I love that Hans always spoke of this harrowing escape as an exciting adventure, and not one of fear and terror.  That knowledge, as it is with so many details, adds layers upon layers of subtext to the beautifully crafted children books these two created. This couple was so close to becoming another unknown causality in that terrible war, but they were survivors, never giving up their hope and optimism in the world that surrounded them. 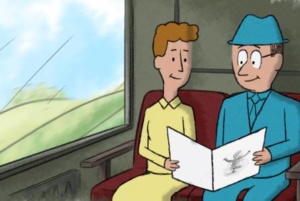 Sam Waterston narrates the tale along with numerous interviews from friends and grown-up children who knew the Rey’s from their northeastern summer cottage community.  The film does a wondrous job not sugar-coating either one of these complicated characters, as Margaret sounded like quite the opinionated character. The film sketches out their journey with exceptional animation and stunning story-telling, expanding on how these two souls created something that would eventually impact so many of our young hearts growing up. Monkey Business gives us so much more to chew on than just the optimistic Curious George and the story of his creation. It gives us something miraculous and inspirational to feast upon as well.