Round Table When Fantasy and Reality Collide While Facing Death 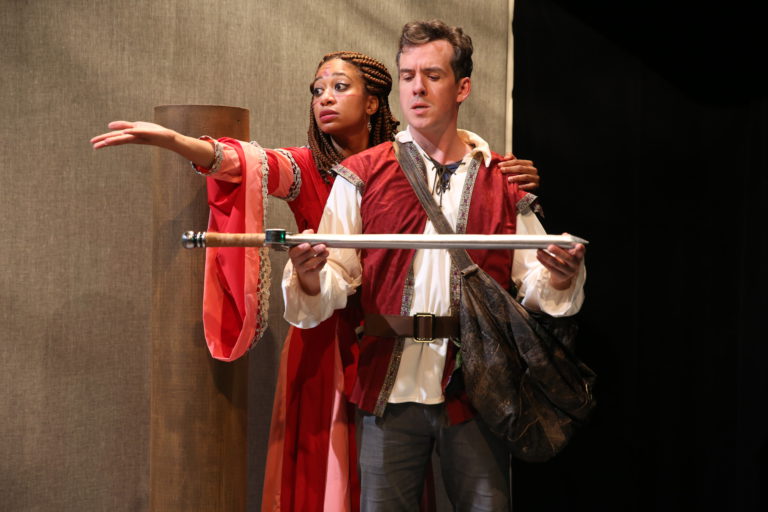 Round Table When Fantasy and Reality Collide While Facing Death

Liba Vaynberg’s Round Table, is a look at how we deal with illness and the avoidance of what in this case will be a devastating outcome. Zach (Craig Wesley Divino), is a writer and consultant of a TV Show based on King Arthur called “Round Table”. The show is immensely popular. Zach, however has several secrets. The first, is he is dying of a brain tumor. The second is he is addicted to LARP (live action role play). It is one of the way he writes his show, but it is also how he escapes what is inevitably going to happen to him.

He connects online and then off with Laura (Vaynberg) a ghostwriter for romance novels who goes under the pseudonym Pamela Wolfstein. He first tells her of his LARP addiction and has her enter into the game. She becomes Guinevere to his Arthur, however Lena (Sharina Martin) who plays Morgan has been in love with Zach the whole time and Laura is left uncomfortable. Also in the game is Jeff (Matthew Bovee).

As the real life of Zach is happening, so is the fantasy version.

Jeff’s brother, Kay (Karl Gregory), is an emergency medical technician who does not want to lose his brother, who has been his support. Kay is gay and their parent’s are homophobic. It is Kay’s sardonic look at loss and the way he tries to cope with his brother’s upcoming death, that lets us in on how each person has their own unique way of dealing with death and that of a loved one.

Kay wants Zach to tell Laura about his illness and Zach tries, but before he can reveal the truth, the truth shows up. Laura feels betrayed, but in the end treasures the moments she had with Zach.

The actors are all wonderful in their roles with Mr. Gregory standing out with his sardonic wit.

Geordie Broadwater’s direction keeps this play moving without allowing what could be a highly sentimental play.

Izmir Ickbal’s set is simple, yet effective. Tree branches make up the fantasy world, where scrims allow the past and the present to combine. The set is inventive for a playing space the size of a postage stamp. Cha See’s lighting, Fan Zhang’s sound design and the delightful costumes by Johanna Pan help keep things on track.

Vaynberg’s play is very much like a chick flick, but there is an audience for this and my guest and I are a part of that. Each character is given a monologue in which to shine and shed light into their inner workings. Vaynberg is a talented playwright and I look forward to more of her work and that of Fault Line Theatre.

RossNovember 16, 2022
Read More
Scroll for more
Tap
Love’s Labour’s Lost Gets Lost in Translation
Opening Night of Chasing Rainbows: The Road to Oz The After Party