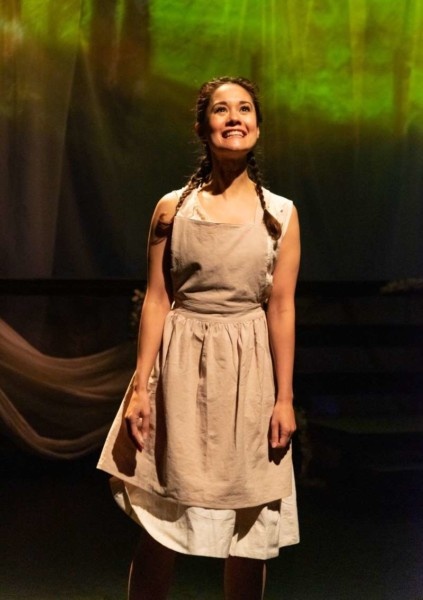 After a successful workshop in 2017, Royal Family Productions presented the World Premiere of Anne of Green Gables starring Broadway’s Ali Ewoldt (Phantom of the Opera, Les Mis) as Anne and all the other characters .The adorable show ran for a limited run January 24th – February 11th. Based on Lucy Maud Montgomery’s beloved novel, this production was adapted and directed by Chris Henry with modern dance choreography by Lorna Ventura.

There was also a Anne of Green Gables: Part II (January 31st – February 10th). Both shows were performed at The Royal Family Performing Arts Space is located at 145 W 46th Street.

This is a one-woman, movement-fueled, theatrical experience for all-ages. We follow the journey of Anne Shirley; an imaginative, hot-tempered, eleven-year-old orphan, when she is accidentally brought to the home of older quiet siblings Marilla and Matthew Cuthbert in Prince Edward Island. Ms. Ewoldt was joined by dancers Brooke Averi, Kiersten Foster, Mindy Lai,Kara Menendez, and Stephanie Young.

Henry’s direction is seamless and enchanting. As for his adaptation, for those who know the books they have been stripped down to their essence. Anne still is full of hope despite everything that she endures. She is enduring, intelligent, intense and full of humor.

Ali Ewoldt excels in playing Anne, as well as playing the Cuthberts, letting us see the tough but pragmatic Marilla and the tender and shy Matthew who Anne brings out both their love and warmth. Ms. Ewoldt is a star and this productions shows that force.

The four dancers become horses, carriages and all the other characters in mime. Since the stage is bare this is imagination done at its best.

Images are projected on a curtain at the back of the stage. Costumes are light and dreamy, as was the lighting and instrumental music.

This is a delightful empowerment show for females of all ages.

Anne of Green Gables: The Royal Family Performing Arts Space, 145 W 46th St. closed but hopefully soon to be given a longer run.