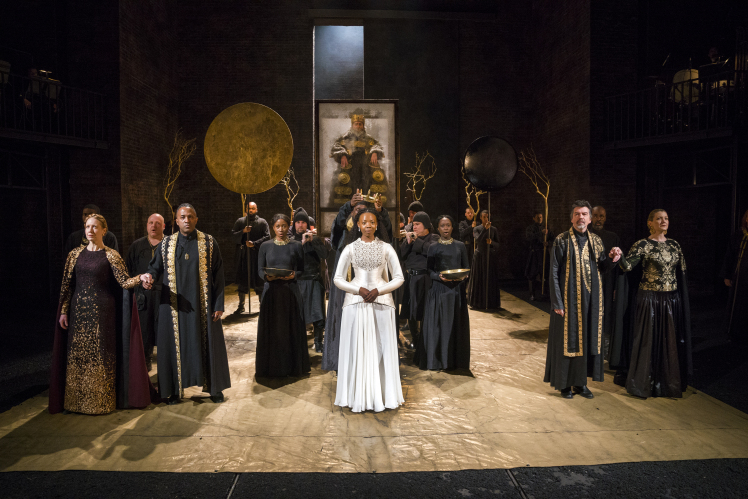 The Royal Shakespeare Company has always stood out in my mind as one of the finest classic stage companies in the world, so it was with great excitement that I ventured over to the Brooklyn Academy of Music’s Harvey Theater, one of my favorite theaters in all of New York, to see the imported production of Shakespeare’s King Lear.  Directed by the RSC’s artistic director, Gregory Doran (BAM’s King and Country), this production, first presented in 2016 stars the incomparable Sir Antony Sher, one of Britain’s most esteemed classical actors, tackling one of the last major male roles from Shakespeare that he has yet to grapple with. Sher states that once you play Lear, there’s really “nowhere else to go, Shakespeare-wise“. The part is a solitary climb; a battle against time and importance; a ‘shouting at, arguing with, a storm”; the ultimate duel with a force of nature and existence.  It’s a part that requires no fear and a lot of humility.  It is, as Sher rightfully states, “the Everest of acting“. A fitting idea for the role, that matches a man who is ready for an ending but not ready to fade away.

One of my all time favorite television shows, ‘Slings and Arrows‘, relished over three seasons the idea of exploring the three stages of man, one per season, as portrayed through Shakespeare’s finest.  (If you haven’t seen this brilliant and funny look at art and commerce within the world of Shakespeare Summer Festivals, find it immediately.)  Romeo and Hamlet marks the beginning, Macbeth takes on the middle years, and Lear, one of three great parts for the older actor, is the finale. Sher has attempted most, missing his chance years ago to play Hamlet “out of a sense of self-oppression“. His Richard III in 1984, performed on crutches earned him an Olivier, and is still considered one of the play’s finest, as he created the visual of a man who was more like a spider at its most wicked.  He has played Shylock, Titus, Macbeth, Prospero, and Falstaff, and now, timed alongside the release of his latest journal-memoir, a book I would love to read, Year of the Mad King: The Lear Diaries, Sher and the RSC has brought this King Lear to BAM before taking a victory lap at the RSC’s Stratford-upon-Avon in late May/early June.

His performance is solid, vulnerable, and wildly endearing, even during the first third when our sympathies side with his three daughters more than the narcissist King.  Cordelia, the most passionately honest of the three, played by the magnificently statuesque Zimbabwean-British actress Mimi Ndiweni (RSC’s Wendy and Peter Pan), fails to play up to the arrogance and desperate needs of her father the King, and finds herself cast off, betrayed by her honesty.  Nia Gwynne (New Vic’s Top Girls) as Goneril and Kelly Williams (National’s Coram Boy) as Regan understand their father’s prideful needs for idolatry and praise him with words that are actually too grand and quite foolish in idea and theme. The Earl of Kent, played with a deep resonating tone of voice and character by Antony Byrne (Theatre Royal’s On the Waterfront) attempts to stand up to the King, defending Cordelia’s public declaration of love for her father, but like her, Kent is not heard through the stubborn barriers that protect and enclose the King, much like the glass walls that shield the monarch as he is carried in and out. He and Cordelia are chastised and ordered away, and the two elder daughters take control of the whole kingdom. This is not going to end well for the old King, but as he brandishes his privilege over Goneril and her court, we feel for her in this moment and understand her predicament, even if it is temporal, but not for the fire she and her sister breathe after.

In the first and only subplot to be found in a Shakespearian tragedy, the bastard son Edmund, played with an amusing but strangely lazy insolence by Paapa Essiedu (Royal Court’s You for Me for You) is also quite the devious and deceiving child. He orchestrates a well thought out and structured plot to forge mistrust between his father, the Earl of Gloucester, played strikingly by David Troughton (Old Vic’s Inherit the Wind), and his legitimate son, Edgar, played with a sweet boyish charm by Oliver Johnstone (Donmar’s Teddy Ferrara). The lies from Edmund told to Gloucester cause Edgar to run from his incensed father, forcing him into hiding in order to save his own life.  Now, both fathers find themselves caught in the raging storm of misguided betrayal, but both are there, wandering through the windy storm solely because of their own doing and arrogance, believing in lies and flattery, even when it goes up against their better judgement.

Shakespeare’s epic King Lear plays with this idea of division; a splitting into smaller parts, in some way corresponding to the actual King James’ doomed efforts to unify the kingdoms of Britain and Scotland at the time of the play’s writing. That period was a dark moment in the history of England and the increasingly fraught Jacobean era, with actual plotters hiding explosives beneath the House of Lords intent on destroying the royal family along with the nation’s political and religious leadership. They had hoped to roll back the Reformation and return to a past time.  The treacherous plot also had nationalistic tones, so it’s no surprise Shakespeare complicates the storyline by having his Cordelia sent away to marry the King of France, instead of the Irishman. This adds to the overtones of national catastrophe landing on the shores of Dover, where Cordelia has amassed a French army in an effort to save her King and father.

The structure and the intertwined concepts of this magnificent play are awe-inspiring, and it’s no wonder it is seen as a touchstone for an older actor to conquer, and Sher gives us a Lear to remember.  His descent to powerlessness is quick and merciless, but sadly his madness doesn’t resonate as solidly.  It doesn’t help that his clothes at the time, designed by set and consumer Niki Turner (Donmar’s Our Boys) are too white and pristine, while Edgar finds himself half-naked, covered in dirt, and deranged (a bit too solidly to make sense of his return to sanity later on). Sher’s fur coat, when he arrives in that strange contraption casts a much grander glow, while the pageantry brings to mind the doomed 1963 film, “Cleopatra“. We see quite quickly that this coat, and all the accessories that surround him are a type of armor against his own insecurities. Underneath, he is just another aging old man, who is lost without his adoring court.  A fool that only his fool, played not-so-foolishly by Graham Turner (Almeida’s Enemies) can care for, but it is really Kent who comes out of this as a man with a strong sense of morality and duty, as it should be, trying to save his King as best he can from his own foolishness.

The actors are all absolutely giving us the finest reading of the text possible, presenting us with a flawless reading of a benchmark play, but for all the precision, the traditional direction fail to bring us an emotional connection to the fall.  That plexiglass cube keeps making its appearance, in two scenes that should have been devastating to witness, but only served to distance us from the madness of the violence that swirls around the King and his trusted followers. In the same way that the shadow puppetry of battles and wheeled out tableau of the dead daughter on her father’s lap keeps us far away and detached from the true emotional core of this drama. The two easily manipulated fathers and their two loving and devoted children are the heart of this play and this production but they aren’t able to beat strongly enough to affect our own.

Years ago, when I was in my teens, I saw a production of King Lear that helped solidify it as one of my favorite Shakespearian tragedies.  It starred Peter Ustinov standing center stage of the Stratford Shakespeare Festival Theatre (1980, directed by Robin Phillips), with a torrential rain and wind storm blasting him from every direction, almost ripping him apart. It was a powerful moment that stays with me, but actually worked against this static staging from the RSC. It is said that with Lear, you do it big, or go home.  I was glad to finally get out, and do just that.

Suzanna BowlingOctober 16, 2020
Read More
Scroll for more
Tap
Meet Dane Laffrey The Set Designer of Once On This Island and Summer and Smoke
Jay Armstrong Johnson Takes on The Phantom Of  The Opera