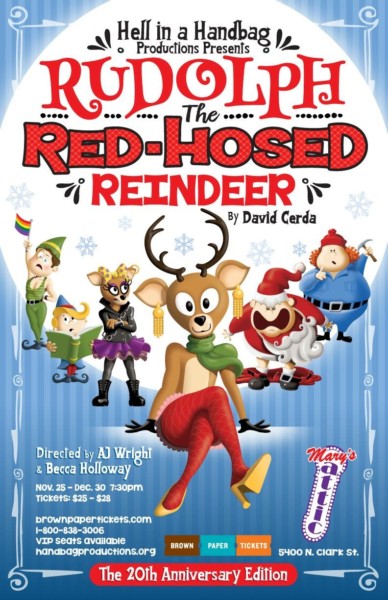 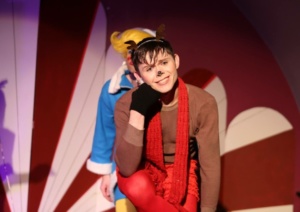 Now in its 20th anniversary production, Hell in a Handbag’s Rudolph the Red-Hosed Reindeer is back and as pointedly political as ever. Reworking his script to thumb a nose or give the finger (your pick) to those newly elected this year, David Cerda’s sharpened script, crafted with claws, savagely shredding anyone appearing in his cross-hairs. This go round, Connie Ann Blitzen (Terry McCarthy) the press secretary for the newly elected President of the North Pole, the tyrannical Santa (Michael Jack Hampton) used their combined overreach at “CNN”, Christmas News Network, to rule over the land. Sound familiar? The Trump presidency jokes purposely populate the first act of this drag-heavy Christmas showcase. I am still laughing at the “put hoods on all the Alt-Right dolls” quip. Co-Directors AJ Wright and Becca Holloway kept the cues loose and the momentum quick as this experienced cast of muggers and scene-stealers did what they do best. Once again rocking the stage of Mary’s Attic, grab a drink at the bar before the hi-jinks begin. 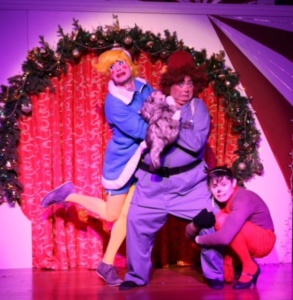 Like the televised stop-motion Christmas classics this show heavily borrows from, here the story centered around Rudolph (Graham Heacock) and Herbie (Kristopher Bottrall) self-described as a “cross dressing reindeer and a not gay enough elf”. Each tormented outsider sent packing by the town bullies including head mistress elf, Elfina, a dizzying diva, hard-rocking and sexy Sydney Genco, snide reindeers Spike (Colin Funk) and Comet (Josh Kemper) as well as the new political regime casting a plague over the holiday cheer normally found in Christmastown. Joining them on their escapade, the first Mrs. Claus (Tommy Bullington) “the First Lady who never was”, traded in for a much younger model, internationally vapid icon, Iwanka (David Cerda) now acting as the First Lady of the pole. Fan favorite regulars Yukon Cornelia (Lori Lee) and Clarice (Madison Piner) show up to lend their saffo-tinged assistance, while on the Island of Misfit Toys, Dolly (Allison Petrillo), Charlie in the Box (Chase Wheaton-Werle) and Lion Moon Racer (Josh Kemper) preen with their fluid sexuality and ambiguous sexual identities in tow. Finishing off the long cast of characters, a performance by the Abominable Snow Drag Beast. 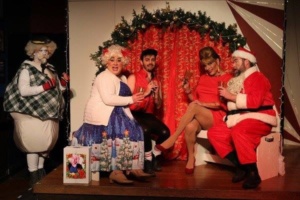 While act one is filled with the message “don’t be yourself” and “they’ll hate you if you’re different”, this wouldn’t be a Hell in a Handbag production if tolerance thankfully didn’t win out in the end.  Rudolph is accepted, Santa’s cold heart’s melted and Connie Ann is sent packing. Kate Setzer Kamphausen’s costuming skewers as hard as the pointed dialog. The red, white and blue jacket worn by Terry McCarthy’s Connie Ann, inspired by the actual Gucci, Paddington Bear style coat worn by the real Kellyanne Conway at the inauguration, rendered the audience speechless. Never has spandex and sequins been stretched to such comical results. Pulling double duty, Sydney Genco also served as cast make-up designer in-between her high-energy, ponytail snapping, solos. Roger Wykes worked wonders with his set in such a notoriously intimate performance space. Lauren Griffith’s club inspired choreography entertained, as did Cat Wilson’s lighting. Amending this show every year to fit the current social climate, the 20th anniversary of Rudolph’s The Red-Hosed Reindeer is pointedly perfect. If you need an escape from the shortcomings that real world relatives often supply, I recommend grabbing a few chosen family members and treating yourself to a slice of Cerda and company’s wickedly twisted wit. 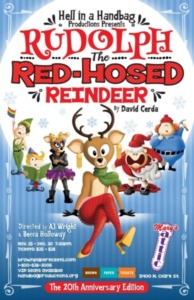 Hell in a Handbag Production’s Rudolph’s The Red-Hosed Reindeer is now playing at Mary’s Attic through December 30, 2017

Suzanna BowlingApril 28, 2022
Read More
Scroll for more
Tap
Face to Face With Desperate Measures’s Lauren Molina
Bette Xmas at the Continental Baths – Back and Brazen As Ever