Ruthless! The Musical When The Bad Seed meets Gypsy

Ruthless! The Musical When The Bad Seed meets Gypsy 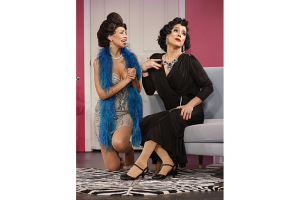 Ruthless! The Musical is fun for the whole dysfunctional family! Beautiful and talented eight-year-old Tina Denmark will do anything to play the lead in the school play. ANYTHING!The question is… Where does such remarkable talent and unstoppable ambition come from? The answer may shock you when you see this award-winning Stage Mother of all musicals! 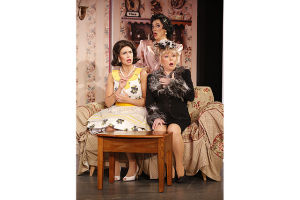 “A spiked Shirley Temple of a show!” – The New York Times

Ruthless! The Musical is an all female musical with music by Marvin Laird and book and lyrics by Joel Paley that spoofs Broadway musicals, like Gypsy and Mame, and movies such as The Bad Seed and All About Eve. The musical premiered Off-Broadway in 1992. The musical opened off-Broadway at the Players Theatre on March 13, 1992 and closed January 24, 1993 after 342 performances. It was directed by Joel Paley with musical direction by Marvin Laird. (Laird was later the musical director for the Broadway revivals of Annie Get Your Gun (1999) and Gypsy (2003)). The central role of Tina was played by Laura Bell Bundy, and featured Natalie Portman and Britney Spears as understudies. Ruthless! The Musical was then produced in Los Angeles at the Canon Theatre, where it opened on November 15, 1993. A recording was made by the 1993 Los Angeles cast on Varèse Sarabande and released on March 29, 1994. The show won the 1993 New York Outer Critics Circle Award for Best Off-Broadway Musical. The musical has had a number of professional productions, particularly in regional theatre. Ruthless! The Musical played at the Colony Theatre, Miami, Florida, in January and February 1995, directed by Paley. The musical ran for nine performances in September 2014 at the Triad Theater in New York City to benefit Broadway Cares/Equity Fights AIDS. The production returned to the Triad in October 2014. The musical opened Off-Broadway at St. Luke's Theatre on June 25, 2015 (previews), officially on July 13, with direction by Joel Paley, musical direction by Ricky Romano, and music supervision by Marvin Laird. For this production, Paley said: "...In this staging, we’ve done away with the intermission and have streamlined it into 90 minutes that is roller-coaster sharp and fast."[8] The cast features Kim Maresca (Judy Denmark), Tori Murray (Tina), Peter Land (Sylvia St. Croix), Tracy Jai Edwards (Louise), Andrea McCullough (Miss Thorn), and Rita McKenzie (Lita Encore).

More in Ruthless! The Musical