Ryan asks: Hi, Are You Single? And The Streamed Answer is Paradingly Fantastic 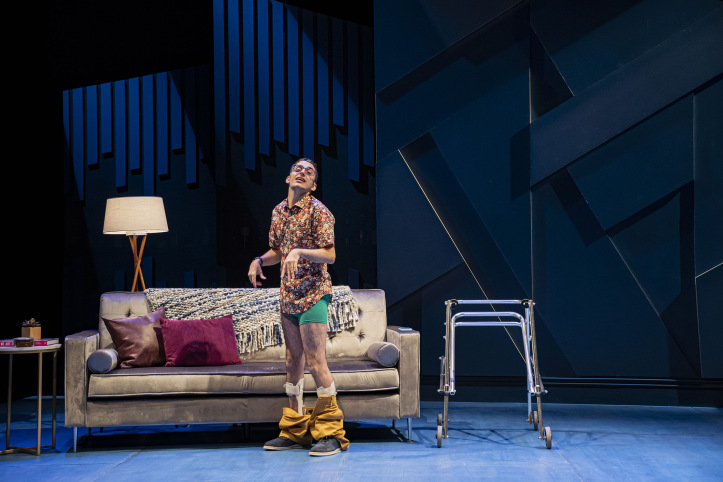 Ryan asks: Hi, Are You Single? And The Streamed Answer is Paradingly Fantastic

Fun pop music parades in Ryan J. Haddad and his one-man autobiographical stage show Hi, Are You Single? almost with a masturbatory glee, brought to the actual live stage by the Woolly Mammoth Theatre Company in association with IAMA Theatre Company. It’s connecting and devilishly delicious, this intro into a decidedly captivating one-sided two-way conversation that quickly pulls us into the deep end,and as directed with a twist very upfront attitude by Laura Savia and Jess McLeod, the story winds itself wisely and shrewdly through some fascinatingly emotional territory that is both current and unknown. Charming us with his determinated stance and brutal caring honesty, Haddad asks us to take a judicial look through the eyes of a queer man with a disability, fighting hard for his Hollywood Sex Scene and Love Scenario. He majestically parades and sits most confidently outside the bathroom asking us all for, not just acceptance, that’s a given, but to step beyond the inconvenience and the judgment in order to see this brave writer and actor as an equally gorgeous and naturally sexual Ryan, as consistently horny as any gay young man around.

With the utmost of skill, Haddad (Netflix’s “The Politician”) tells us with all honesty that he has a much higher sex drive than any of you streaming or sitting (six feet apart) in the small audience of friends and cohorts. It’s a strongly written imagining, “my darlings,” standing with and witnessing the rejections and lies that dismiss his body, himself, and without missing a beat, all that lies beyond. It’s clear, he tells us, that he has had love and support from his family and friends growing up regarding his cerebral palsy and his pathway upward attests to it, but it is also quite obvious, that he has had both physical and emotional barriers set before him, particularly in his search for love, a date, or even a driveway blow job hookup. He beacons us to join him on his search through Grindr or at your local inaccessible gay bar, from encounters with gay men in bars, dorms, and on apps, drag queens in NYC, all the way to platonically sexy lap dances, and we can’t help but be moved and lifted up by his strong sense of self and talent. Haddad’s humor and carefully organized voice lead us most openly and honestly through this wholly unique, pleasurable but scary, space and time, with the utmost power and strength. Hoping to find the duality of truth through the stated “inconvenience” of sexualizing those who have disabilities, the twists and turns that he guides us, and himself, through is both whip-smart and daring, and when the mirror turns on his quest for a boyfriend, we can only lean back and state, most honestly, “Congratulations“, not just for the smart writing on the show specifically, but on the bravado he brings to the autobiographical solo show structure and his performance within. “I can be cool with that.”

Hi, Are You Single? featuring the playwright and actorRyan J. Haddad, with scenic and costume design work by Lawrence E. Moten III (59E59’s How to Load a Musket), lighting by Colin K. Bills (Woolly’s HIR), and sound design by Tosin Olufolabi (Monumental Theatre’s Head Over Heels),was wisely developed by Dixon Place, Williamstown Theatre Festival and the Public Theater/Under the Radar, and originally developed by Laura Savia. Hi, Are You Single? was recorded with a limited live audience and includes options for Captioning and Audio Description. The show will be available for digital streaming from Feb 1 through Feb. 28. Virtual tickets are $15 with advance purchase and $20 after Jan. 31 at woollymammoth.net. Do yourself a favor. Pull up a chair, make yourself a margarita, and dive into the wonderfully clever and determined world of that other Ryan and unleash the straight-forward pointed question, Hi, Are You Single? You might be surprised by the answer you get.

“I have wanted to introduce Ryan Haddad to the DMV ever since I got to Woolly. He is a captivating storyteller who charms anyone he meets within seconds,” says Maria Maneula Goyanes, artistic director at Woolly Mammoth Theatre Company. “Hi, Are You Single? asks us to examine sexuality through the lens of a queer man with a disability who is struggling to make meaning out of intimate interactions. That in itself is a radical shift in perspective. Oh, and if you’d like to take him on a date, I’d be happy to set you up!”

Suzanna BowlingApril 9, 2021
Read More
Scroll for more
Tap
What to Watch in The New Year: February 5
The Glorious Corner