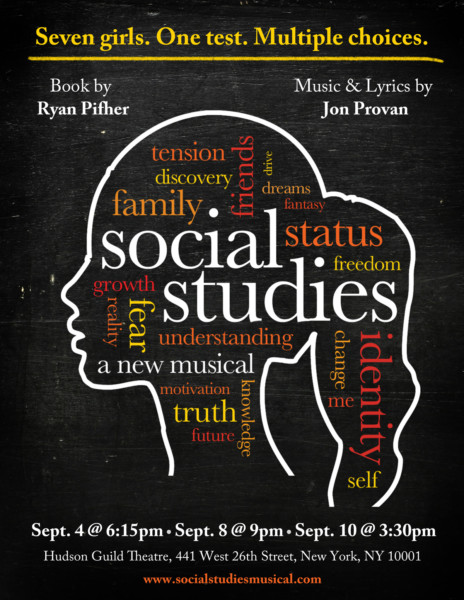 Social Studies, the new musical at the NY Summerfest, follows seven eighth-grade girls on their first day at school. To their surprise, as they enter their social studies class they are told they are being given a virtual-classroom exam, part of a nationwide study. The test probes into their feelings about self, families, relationships, and how they think about themselves. As they write, the audience eavesdrops into the inner workings of their brains and their private lives.

To the outside world, Gilly (Edie Crowley) is from the other side of the tracks, born into a mechanics family; her life has been mapped out for her. Grace (Ginger May) is an art student with hippie parents and is just a little more grown-up than they are. Cyd (Sam Brady) is still trapped in her little-girl-world where My Little Pony and princess dresses are how she sees life while her parents are falling apart. Emma (Kelly Flatley) is the popular girl whose life is defined by being a mean girl. Her mother sees she is spiraling out of control but is it too late? Megan (Claire Kwon) is that goth chick who goes to comic-con and likes it, but what is behind all the dark clothing? Margaret (Abbie Anderson) is gawky, insecure and has a secret she cannot even admit to herself and LP (Kate Glennon) is that over achiever who is just looking for unconditional love.

As the questions get tougher the girls discover who they really are, who they want to be, and the unseen connection between them.

The cast, all young performers, excel in acting thanks to director and book writer Ryan Pifher. They are fearless in what they do and Mr. Pifher’s material is rich in texture. Ms. Anderson is highly comedic, as is the script. Ms. Crowley, a powerhouse alto, is a slam dunk, but it is Ms. Kwon who breaks our hearts with her emotional solo “Go On.” The choreography by Allison Scott allows the girls to move with grace and realism while adding some rather hot moves.

The music and lyrics by Jon Provan run the range of emotions and styles. “Blank Canvas” and “Fly” bring to mind Sondheim. “Down, Down, My Baby” is an ode to country, while “Being a Girl” is a tribute to “La Vie Boheme” from Rent. The heavenly “Stars”, “Go On” and “I See You” are lyrical and melodically beautiful. Mr. Provan’s beats are infectious and his harmony exquisite.

Mark my words, Ryan Pifher and Jon Provan are ones to watch. I first discovered them at NYMF with their show Coming of Age.

This show needs to play across the country to schools everywhere. Adults will see themselves, as this spiritual, uplifting show unveils the myths and seeks to make a difference.