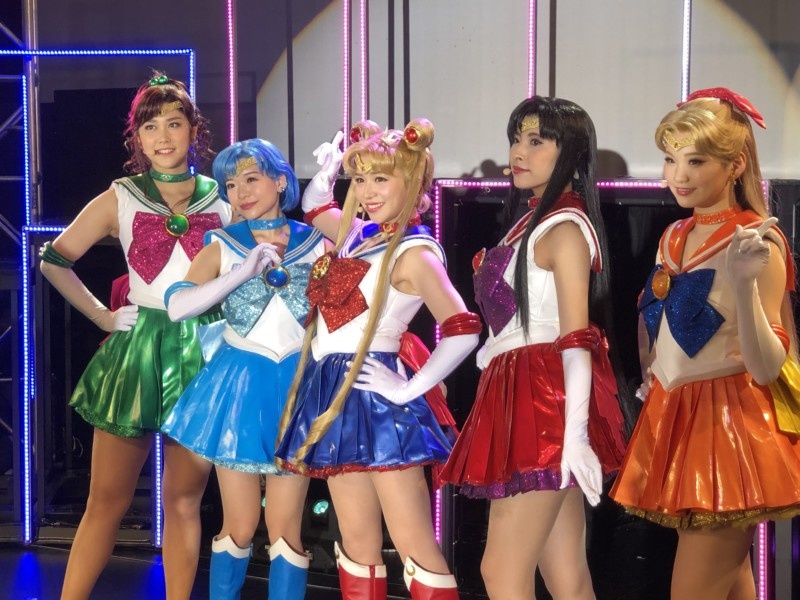 “Pretty Guardian Sailor Moon” The Super Live, a new live 2.5D Musical based on the wildly popular manga (comic book). This exhilarating new show will play the PlayStation Theater (1515 Broadway at 44th Street) for three performances on March 29 at 8PM and March 30 at 1PM and 5PM. Directed and choreographed by Takahiro (Madonna’s Sticky and Sweet Tour) with book by Akiko Kodama (Takarazuka Revue Company), and music by Hyadain (Momoiro Clover Z; AKB48).

The musical features an all-female cast; there are some male characters, played by women. “Pretty Guardian Sailor Moon” The Super Live marks the first time a 2.5D Musical will be on an American stage. 2.5D Musicals, which began around 2000, are based on popular contemporary Japanese culture: manga comics, anime and video games.  Manga and animation are in 2D, and live theatre is in 3D. Therefore, they call performances based on manga and animations 2.5D. A theatre has been built in Japan to house this popular new form of entertainment.

“At its core, Pretty Guardian Sailor Moon is about strong girlfriends banding together to fight for what they believe in…that’s timely,” said producer Takaharu Uera. “Sailor Moon and her SailorGuardians are equipped with powers that help them defeat evil and the characters are imbued with the self-determination to make their own confident decisions. In short, they are the ultimate example of ‘girl power.’

Pretty Soldier Sailor Moon and later as Pretty Guardian Sailor Moon is a Japanese shōjo manga series written and illustrated by Naoko Takeuchi. It was originally serialized in Nakayoshi from 1991 to 1997; the 60 individual chapters were published in 18 tankōbon volumes. The series follows the adventures of a schoolgirl named Usagi Tsukino as she transforms into Sailor Moon to search for a magical artifact, the “Legendary Silver Crystal”. She leads a diverse group of comrades, the Sailor Soldiers (Sailor Guardians in later editions) as they battle against villains to prevent the theft of the Silver Crystal and the destruction of the Solar System.

The manga was adapted into an anime series produced by Toei Animation and broadcast in Japan from 1992 to 1997. Toei also developed three animated feature films, a television special, and three short films based on the anime. A live-action television adaptation, Pretty Guardian Sailor Moon, aired from 2003 to 2004, and a second anime series, Sailor Moon Crystal, began simulcasting in 2014. The manga series was licensed for an English language release by Kodansha Comics in North America.

Since its release, Pretty Soldier Sailor Moon has received acclaim, with praise for its art, characterization, and humor. The manga has sold over 35 million copies worldwide, making it one of the best-selling shōjo mangaseries. The franchise has also generated $5 billion in merchandise sales.

Suzanna BowlingJanuary 29, 2023
Read More
Scroll for more
Tap
Lizzie Borden Set To Rock Off Broadway
Fall in Love With the Music of of Benny & Joon