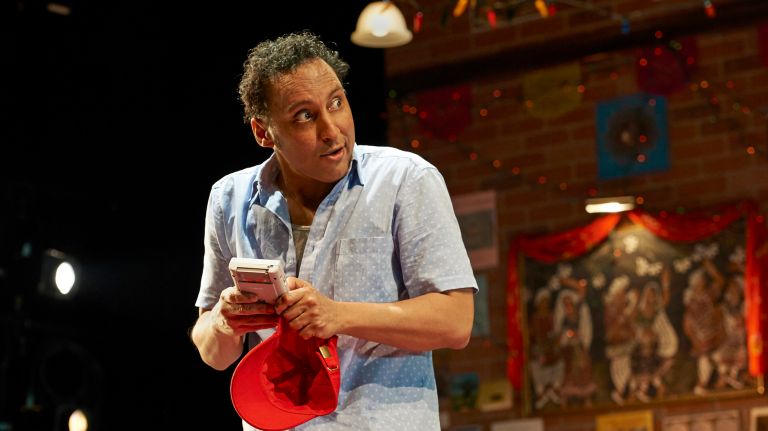 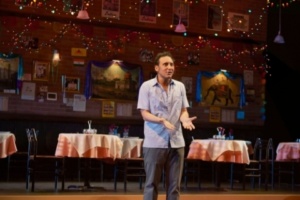 Written and acted by Aasif Mandvi, Sakina’s Restaurant is full of heart. It is the 20th-anniversary production of this Obie Award-winning play, and though I did not see it the first time around, it is fresh, witty, and has much to share.

Once in the restaurant, we meet the owner, Hakim, Hakim’s wife, Farrida, their two children, Sakina and Samir, and Sakina’s betrothed, Ali. 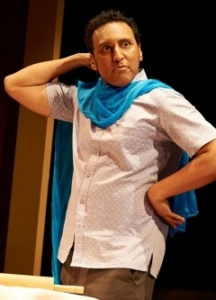 Hakim and Farrida, have come to America from India so their children could have a better life. Though the children have acclimated into this new culture more than they have, they aren’t happy about it. One of the most powerful moments is when Farrida states she is not seen. She is a woman who has sacrificed everything for her family. 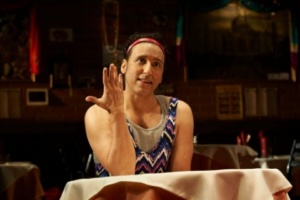 Their teenage daughter, Sakina, wears dresses too short and has a boyfriend who isn’t sure if she’s Indian or Iranian. They fight over the Indian immigrant, who she is destined to marry thanks to her parents choosing him when she was younger. We hear her side of a conversation with the boy who demands she tear up a photo of his rival.

Samir, the youngest of the clan, is into his GameBoy. When a trip to Disney World is canceled and replaced with a trip to India due to his grandmothers passing, we see just how much the two cultures are at odds. 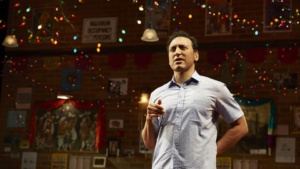 As we meet these people who are seared into the memories of Azgi, we are given insightful stories told through parables.

Director Kimberly Senior breaks the fourth wall and allows us to really get to know each of these characters, flaws and all. She brings out Mandvi’s sensitivity. This is a play based on sincerity. With just a scarf, a tube dress, a hat, and a coat, Mandvi blends seamlessly in and out of each of these individuals so that by the end of the play we feel as if we know each one.

Set in the 1990’s, the Indian immigrant experience then and now is very different. This is an important play as it shows Muslim life without the politically and socially “PC” issues of today.

Wilson Chin’s set highlights the letter and postcards as well as puts us right in the middle of the restaurant, so we feel at home.

Mandvi is a talented individual whose love of his family and culture burst forth so that you don’t even realize that time has flown by. Sadly, Azgi never gets to see any of the places he dreamed of seeing, but he learns the meaning of life, as do we.